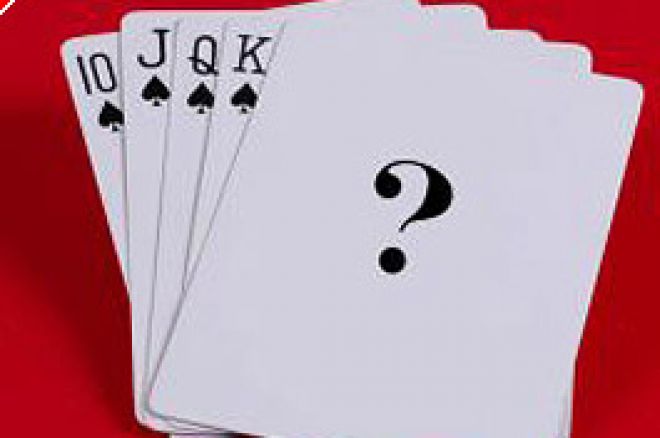 In our second article we dismissed the possibility that two million extra chips found their way into the 2006 WSOP Championship Event through the normal processes of blinding off dead stacks and chip race-offs. We also noted that the vast majority of the chip increase occurred between the end of Day Five and the end of Day Seven. Before we investigate the two remaining explanations of cheating or an error, we wanted to narrow down the time frame when the increase occurred. If we could better determine "when" the increase took place, it might help us determine "how." Examining available media reports we honed in on a specific time period during Day Seven.

Day Seven of the 2006 WSOP Championship began at noon with twenty-seven players. At approximately 1:14 PM, Eric Lynch was eliminated in 24th place. At 1:36 PM, twenty-one remaining players started their first break of the day. We believe, with the supporting data, that the increase in chip count can be attributed to this twenty-two minute period. It was during this time period that the $5K chips were colored up. Day Seven would play on until approximately 2:00 AM, when Fred Goldberg became the final table bubble boy. It would be sometime after that when the official end-of-day chip count confirmed the increase. Here's some of the reported data from Harrah's and Pokerwire from Day Seven that support this claim:

- The End of Day Seven chip count was verified by WSOP tournament officials with a physical count at the start of the final table.

- The total chip count reported by ESPN when Jamie Gold and Paul Wasicka started their heads-up play was 90,150,000 chips.

In our first article we already discussed some of the problems with chip count data accuracy. As Day Seven progressed past the first break, there was a lot of variation in the reported chip count data. Performing a rough mathematical analysis, this variation straddled a mean approaching the 90,000,000 chip mark; well above the day's official starting chip count and approximating the officially verified end-of-day count.

It also should be noted that the 500K increase reflected in the official end of Day Six count didn't raise too many eyebrows, even when compared to the "near perfect" count of at the end of Day Five. The media had become used to the over and under variation of the end-of-day counts, commonly plagued by self-reporting and recording errors. For instance, the official end of Day Four chip count was $86,752,600; almost a million chips too low. But Day Seven's end-of-day chip count, verified before final table play, raised more than eyebrows.

However, on site at the Rio in the tournament room, media did not have the luxury of the careful examination of the multiple tournament reports and chip counts we have analyzed over the past several weeks. Once we had honed in on the critical 22 minutes, then the only other plausible explanation for the huge chip increase became easy to dismiss. Let's dismantle the cheating explanation right now and then we will explain what exactly did happen during those 22 minutes.

When playing for a total prize pool of $82 million dollars people are motivated to cheat.

When we heard of the extra chips in the Main Event, we certainly considered cheating by one or more players. Perhaps some of the chips in excess of the two million did make their way into the Main Event via illegal means. But the fact stands that the majority of the excess chips came into the event on Day Seven, which means that most of the chips used during the WSOP could not have been used to contribute to the two million chip increase. Here's why.

Larger denomination chips did eventually come into play in other events as the result of chip color-ups. However, one has to wonder if you were deep enough in an event and had a big enough stack to actually see a $5K or $10K chip, if you would be willing to pull it out of play from an event where you were either in the money, or very close, in order to have that chip in the Main Event. You'd also have to assume that you would make it deep enough into the Main Event to introduce that larger denomination chip. And, of course, we are not talking about accounting for a single chip but rather hundreds of chips.

So the question is were two hundred $10K chips slipped into the Main Event or were four hundred $5K chips pocketed from other events and reintroduced? A player would have to go very deep in many other events to be able to pilfer two million chips from their stacks without notice. Removing two million chips without detection and those same chips not being missed in the earlier events borders on the realm of the absurd.

Furthermore, those chips would have had to be introduced during the 22 minute window and not be detected. Those final three tables on Day Seven were being filmed by ESPN and watched by dozens of media and hundreds of spectators. Is it really feasible to think someone actually slipped two, three, or four hundred chips onto the table undetected?

What happened in those twenty-two minutes? The color-up and race-off of the $5000 chips occurred at the first break of Day Seven; the period when the chip increase is first detected. We postulate that in that 22 minute period, an inadvertent, but large mistake was made; a two million chip mistake. In those 22 minutes, the $5000 chips were removed from play and a simple case of bad math, working without the safety net of basic accounting procedures, was to blame for the introduction of approximately two million chips into the main event. Day Seven would play on until approximately 2:00 AM. By this time, it was arguably an irreversible error; aided and abetted by hours of play, busted players and aggregated chip stacks.

To understand what happened in those 22 minutes, it helps to understand the color-up process as it was being practiced at earlier points in the WSOP Championship event.

Color-up was not one single process. Sometimes it was preformed periodically during play to consolidate the growing chip stacks in the field. For instance, on Day Five, Card Player reported "The tournament staff has just brought out the $25,000 chips and they will now be in play. This isn't an official color up, but they will be periodically switched out for smaller chip denominations."

Most often, color ups were conducted in a period prior to a break, pending a chip race-off as occurred for the color up of the $1000 chips: "The players are taking a 20 minute break following the color up of the yellow $1,000 chips." In pre-race-off color-ups, the tournament floor personnel would go from table to table, exchanging higher denomination chips for an equal value of lower denomination chips. Often times, to facilitate the process, they would ask one or two players to buy up all the lower denomination chips from the other players at the table so that a smaller number of floor transactions had to be made. It was a "rolling" process that could start during play, but could also extend beyond the official period of play.

Tournament staff can color-up to any higher denomination chip in play. The prudent decision at this chip-up was to exchange the 5K chips for 25K chips, whenever possible. While 100K chips were in play, the blinds were still below the 100,000 threshold; moving to 30K/60K with a 10K ante after the break. With adequate $10K chips already in play for the blinds and antes, coloring-up to $10K chips would have been inefficient.

A stack (20) of 5K chips equals 100,000, which is exchanged for four 25K chips. A rack of 5K chips equals 500,000 (5 X 20 X 5K), which should be exchanged for twenty 25K chips (a full stack). Here is the critical error. A five stack rack of 5K chips should swap for a single stack of 25K chips but, in fact, the color-up was made at the rate of two stacks for one rack. So anyone with a rack of 5K chips worth 500K in fact got 1 million in chips; a half million more chips than the value they should have received. One player with two racks may have received not 1 million, but 2 million. We believe that an excess of approximately 2 million chips were added at this color-up by incorrectly exchanging the $5,000 chips for double their worth.

While this was an easy enough error to make, it deserves some discussion as to why it wasn't detected. Or if it was detected, why it wasn't identified and rectified.

The color-up and race-up were conducted prior to the break. The clock for the break does not officially start until the color-up is completed, but players often leave the tables to begin their break and are not present during the color-up. If there was consolidation of lower denomination chips among one or two players at a table, the other players might not have felt the need to monitor the completion of the color-up. The majority of players may not have been directly involved with the tournament staff's exchange as they had already been colored-up by another player. Even if a player's stack was specifically involved in a floor transacted color-up, the player may have failed to notice the error. In a color-up, a player's stack is physically reduced; even factoring in the mistake, stacks were being reduced at a ratio of 5 for 2. After hours of play the participants may not have noticed the mistake. And of course, the count is being executed by tournament officials, the very people entrusted with maintaining the accuracy and integrity of the event.

One or more players may have noticed, but not come forward. If so, was it a case where the potential whistle blower worried that they might be the only one penalized for their honesty; reducing their stack while other beneficiaries of the error remained silent? Or could there have been someone that remained silent, knowing the huge edge they were being given in the race for the twelve million dollar first prize? If either case was true, it represents a gross ethical breach. However, there is no written rule that requires a player to report this kind of error to tournament officials. There should be.

While we were supplied with a tip that motivated us to investigate this explanation, the available data supports the hypothesis that approximately two million chips were erroneously introduced during the color up of the $5K chips. The color-up error was an innocent mistake, but that does not make it excusable. This is a common and preventable error. The fact that it has not been sufficiently addressed, knowing both the frequency of occurrence and potential for it to occur, speaks badly for officials entrusted with safeguarding the players' money and the integrity of play.

We were distressed that it should have occurred at a critical juncture of the Main Event of the World Series of Poker. We were not alone. When the Day Seven chip counts were released nearly every member of the long-term WSOP media pool asked questions. We wished they had been addressed. We wish Harrah's had conducted this inquiry.

We love the game of poker and we are encouraged by the growth and appreciation of this game. We struggled with releasing these articles, knowing the fragility of public sentiment about poker, especially in the current environment. But in the end, we want better poker for everyone.

Please watch for the next article where we will give players and officials a chance to react and respond.