The 'Other' Games of Poker: Chris Fargis Talks Triple Draw 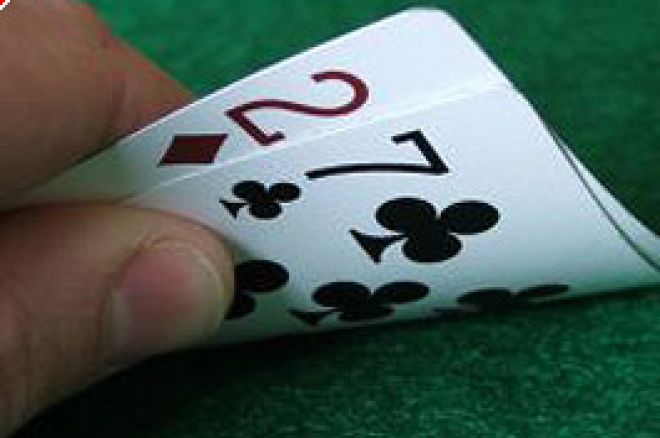 Professional poker player Chris Fargis has spent the better part of the last year playing in some of the highest limit mixed games across the country, from the star-studded $800-$1,600 B.O.T. (Badugi, Omaha, Triple Draw) side games at the 2006 WSOP to $400-$800 Badugi at the Bellagio to the highest limit razz and triple draw games online. Also competing frequently on the $10K buyin tournament circuit, Fargis has 2 WPT cashes, a 2nd place NLHE finish at the 2005 L.A. Poker Classic and a WSOP Circuit Ring which he earned by winning the Triple Draw Lowball Championship at the Grand Casino Tunica in 2006. Chris shares strategy and writes about his life at the tables at his award-winning poker blog, "Twenty-One Outs Twice", a must-read for any player seeking to develop his or her mixed-game skills. Today, we're privileged to have Chris impart some of his wisdom and experience in triple draw to us here at PokerNews.

Nicole Gordon: First of all, what is the most important thing for a triple draw beginner to consider?

Chris Fargis: Position is very, very important. You can play much looser the better your position is. Also, draw smooth! Beginners often underestimate how much better a smooth draw like 7-5-4-2 is versus a rough draw like 7-5-4-3.

NG: With the huge pots and incredible action in Triple Draw, just how much does the variance suck and what should players do to compensate for it when it comes to bankroll management?

CF: There is a lot of variance in the game. Yes, it can suck a lot if you're on the wrong side of it for a week or two. If you are playing a higher variance game, you need a larger bankroll to play the same stakes (compared to a lower variance game). One way to help mute the variance is to play lower stakes.

If you were the BB, would you re-raise here or call? Is this a situation where you would "break" the 9 on the second draw or stay pat?

CF: I would reraise and stand pat here, even if the button capped it.

What are you putting the button on at this point? If it was me I know I'm hating my hand. Is it time to draw one and pray for a deuce, stay pat, or just get out of the hand?

CF: You opponent may have you beat here, but some players will make this raise to try to make you break a marginal hand. I generally don't break hands once I have stayed pat. Given that the button is a wild player, I would call the raise and stand pat. Against a tighter, more straightforward player, I would fold. Calling and taking one card to try to hit a deuce is not a good idea in this situation. There are probably three deuces left in the deck (your opponent is likely to have one) out of 45 unseen cards and the pot is not big enough to pay a big bet to try to hit one of them.

NG: Here's another example from a Poker Stars game just this weekend. I'm in a three-way pot out of position going into the second draw. I have 2-3-5-8-X and draw one. The under-the-gun player (who originally raised before the first draw and appears to have missed) draws one, and the button (who cold-called the UTG raise and drew two) now draws only one. I hit a 7 for 2-3-5-7-8 and am temporarily excited about my pat hand. I bet out, UTG raises, and the button makes it three bets. I call and UTG calls.

How are you feeling about the 7-8 low given the action? Is this a situation where you'd break the 8 and try to hit the wheel on the third draw?

CF: Your 8-7 is not looking good here. You bet out, indicating that you have a pat hand, UTG raised, indicating that he has a strong hand, and the button three-bets it. The button's play here is very, very strong. Some tricky players will make this play with a mediocre hand trying to get you to fold and the UTG player to break, but generally this action indicates a lot of strength. I think your best option is to fold when the button three-bets it. If you call, you should draw, but it's unlikely you're getting the correct price to call two bets cold here. Some of the cards you need are very likely to be in your opponents' hands (reducing the number of outs you have) and you also have to worry about the UTG player four-betting it and charging you more to draw.

NG: Has playing Triple Draw affected your approach to other poker games? What can a Limit Hold'em or Omaha Hi-Lo grinder get out of some experimentation with triple draw?

CF: Poker is supposed to be fun, right? When I play only one game for hours a day for weeks in a row, I start having less fun. Experimenting with games you don't normally play is a good way to keep things fresh and enjoyable and keep your mind focused on improving your poker.