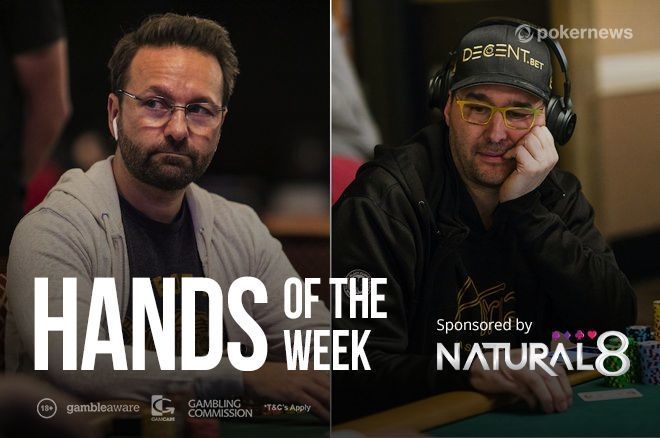 Who doesn’t like it when two legends of the game are at the same table? That was the case in Event #20: $500 PLO 6-Handed when Daniel “DNegs” Negreanu and Phil “Lumestackin” Hellmuth were playing together in the money.

Hellmuth got it in while Negreanu was looking for low to middle cards. The

flop kept the "Poker Brat" firmly in the lead, but the

turn made things interesting by giving Negreanu a pair and wrap. The

river gave Negreanu the nuts and Hellmuth was ousted in 95th place for $920.97.

It wasn’t a game-changing hand per se, but it’s definitely one Negreanu can hold over Hellmuth all summer long.

Event #24: $400 No-Limit Hold’em 8-Handed ended in a slobber knocker heads-up match between Nick “samadhi” Binger and Ryan “Adoptt_aDogg0” Leng, both of who were seeking their second gold bracelets. While that back-and-forth match ultimately saw Binger prevail, it was a hand during three-handed play that was the real heartbreaker.

It began when Binger raised to 980,000 from the small blind and Leng called from the big blind to see a

river put a straight on the board and Binger checked. Leng moved all in and Binger called off for 5,805,945.

Leng had flopped the nuts but the unlucky runner-runner six and eight meant the two players were destined to chop. Given how Binger had been playing up to that point, it wasn’t a stretch to imagine he would’ve paid off had the river been a brick. In a different world where that had been the case, Leng would’ve taken a huge chip lead into heads-up play against Beesley.

Instead, Binger survived and went on to ship the tournament while Leng surely lamented his bad luck in this hand.

In Event #26:$500 NLH Grande Finale, Ethan “RampageP” Yau kept the masses entertained as he streamed his way to a WSOP gold bracelet. A self-described $1-$3 player who often loses, a lot of hands Yau played proved both compelling and on the luckier side of things.

kept Guzzardi in the lead, but the running

river gave Yau the diamond flush to score the double knockout. You can watch the hand in the long stream below at the 7:22:45 mark.

Natural8 2020 WSOP Online Hand of the Week: A Wholesome Hand for Ryan Depaulo