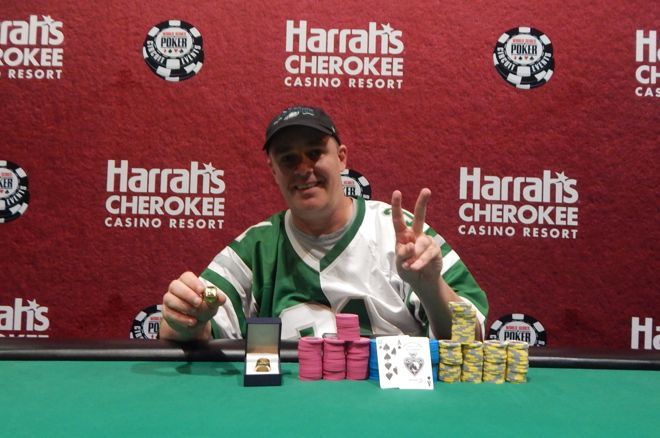 On Sunday, the 2019/20 World Series of Poker Circuit Season – one that had been interrupted by the pandemic – came to an end with the annual Global Casino Championship, which for the first time was held online at WSOP.com.

Players qualified for the $1 million guaranteed tournament by either winning a WSOPC stop Main Event or finishing as Casino Champ. In addition, any player that won a ring during the season or finished in the top 100 of last year’s WSOP Player of the Year race had the option to buy-in directly for $10,000. Seven players opted to do just that meaning the total field stood at 130 players with a $1,070,000 prize pool up for grabs.

After 11 hours of play, three-time ring winner AJ "RandyLerch" Kelsall emerged victorious to capture a $275,632 first-place prize and his first gold bracelet. Kelsall won his first ring back in 2015 and added two more this past season. He qualified for the Global Casino Championship as an at-large points qualifier after finishing fourth on the leaderboard with 332.5 points from 30 cashes totaling $214,326 in winnings.

Prior to the win, Kelsall had just over $1 million in lifetime WSOP-related earnings. His best live score was $124,731 for winning the 2014 Winter Poker Open at Seminole Hard Rock Tampa Bay.

As for the bracelet win, Kelsall called it a “dream come true.”

Kelsall began the final table in the middle of the pack and held strong before dispatching Shawn “Saygoodnight” Daniels in fifth place, the result of ace-king holding against ace-five all in preflop.

With three players remaining, Kelsall was the short stack but before long claimed the lead. He then won a race with pocket fours against ace-jack to send Brad “bd3303” Albrinck to the rail in third place, good for $120,161, and that allowed Kelsall to take a more than 2:1 chip lead into heads-up play against WSOPC Planet Hollywood Main Event champ Michael "annie_r_u_ok" Trivett.

Trivett would soon double into the lead, but just when it looked as if Kelsall was destined for second place, he doubled himself to reclaim the lead. In the final hand of the tournament, Trivett would flop bottom two pair and Kelsall a double gutshot straight draw. The chips got in and Kelsall turned a wheel before fading the river to close it out. Trivett had to settle for a runner-up finish for $170,344 in prize money.

While the new WSOP Circuit season would normally be underway by now, the pandemic has prevented things from starting as usual. As such, details surrounding upcoming WSOPC stops are to be determined.