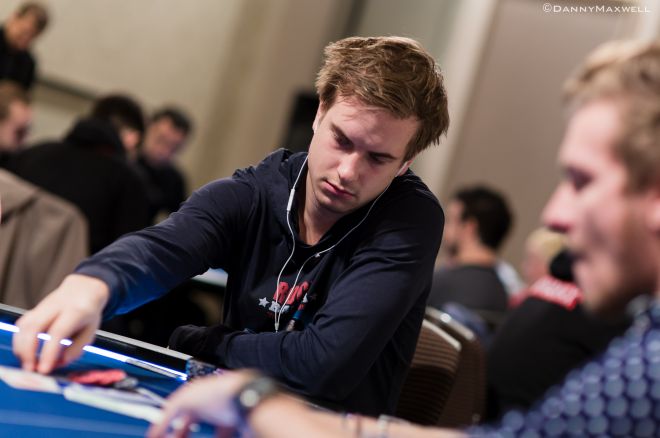 Each week, the Talking Poker series will highlight a particular poker term. We’ll give you a clear, to-the-point definition of the term and an example of the strategic concept to which it refers, so that you can start using the term and implementing the related strategy into your game. This week we turn our attention to “barreling.”

A “barrel” refers to a bet, usually in the context of a hold’em or Omaha player making successive bets on postflop streets. For example, someone describing a hand might say “He fired three barrels on the flop, turn, and river, and his opponent kept calling.” The term is also used as a verb, as in “He raised before the flop, then barreled on all three postflop streets.”

In a no-limit hold’em cash game, Player A raises from under the gun (UTG) with

. Player B, a tight player, calls from UTG+1 (one seat over) and everyone else folds.

The two of them see a flop come

. Player A continuation bets and Player B calls. The turn is the

. Player A decides it’s a good spot to bet again, so he “barrels” the turn. Player B calls once more. The river is the

. Player A continues with a third “barrel” and bets again. Player B folds.

In most instances, players use the term “barrel” when talking about bluffing by making successive bets. When making multi-street bluffs, it is important to think about your range and your opponent’s range.

In the previous example, Player A raised UTG (that is, from early position), so his range should be somewhat narrow, perhaps only including strong hands such as high pairs,

. Meanwhile Player B just called the preflop raise with many players left to act, so it is less likely he has a high pair or

because he would probably reraise with those hands.

With that in mind, Player A can represent high pairs on a ten-high flop by continuation betting or “barreling.” Player B may call with a

or a medium pocket pair. When the king comes on the turn, Player A can still represent high pairs and now

as well by putting in the second barrel. Player B will now have a hard time calling with a ten or medium pocket pair. Then the river barrel by Player A will most likely be enough to make Player B fold almost all of his range.

When making such postflop bets or “barrels,” you should also consider the equity of your hand (how often you will win at showdown). The more equity you have in the hand, the easier it is to barrel. In this example, Player A not only has overcards to the ten-high flop, but he picks up more equity when the king comes on the turn (giving him gutshot straight outs, too). If the turn had been a spade, that would have given him a flush draw, which also would have increased his equity. This means that Player A would have even better odds to bluff or barrel because he could still win with the best hand a certain percentage of the time he gets called.

In this preview video by CardRunners instructor Grant “Balbomb” Coombs, he reviews a couple of hands of six-handed no-limit hold’em he played in which he gives a lot of attention to considering his opponents’ ranges as well as how they perceive his own. The first hand in particular shows Coombs “barreling” on all three postflop streets (he “triple barrels”), while giving a thorough explanation for why he does. Take a look: