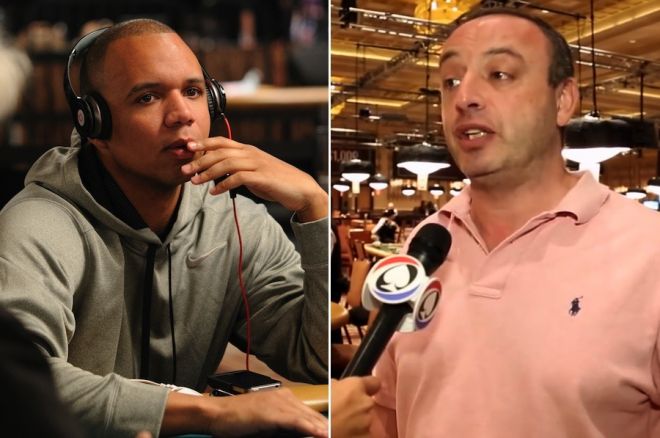 Welcome back to the Talking Poker series in which we highlight a particular poker term, giving you a clear, to-the-point definition and an example of the strategic concept to which it refers. Today we discuss “three-betting.”

After that, the next reraise is called a “four-bet” and so on. Thus when someone is described as “five-bet shoving all in,” it is understood that the final all-in reraise came following a series of raises back and forth.

The term “three-bet” can also be used with reference to postflop betting, though again refers to the third bet made — i.e., the first reraise in a bet-raise-reraise sequence. So, too, can players speak of “four-betting” (and so on) after the flop, although more often than not the terms are used to describe preflop action.

Player A on the button opens with a raise, then Player B in the big blind defends by calling. The flop comes

, and Player B leads out with a bet. Player A raises, then Player B reraises or three-bets.

Years ago, before the poker “boom” and the significant shifts in strategy that followed, a no-limit hold’em player making a three-bet or reraise before the flop could be counted on to be signaling a fairly narrow range of possible starting hands, all very strong. In fact for a significant category of players, a preflop three-bet could be reasonably read as suggesting the player likely held

Such is no longer the case thanks to the growing popularity of aggressive preflop maneuvering, where even players who four- and five-bet can be doing so with less than premium hands. The old saying “the fourth raise means aces” — referring to what would today be called a “five-bet” — no longer holds as a safe generalization, although it does readily apply to a number of players who aren’t capable of making a five-bet with less.

That said, it is often the case in many lower-stakes cash games don’t, in fact, feature a lot of preflop three-betting, which means the move is still (frequently) going to be a sign of strength. Building pots before the flop with strong starting hands (like aces, kings, queens, and ace-king) is desirable, and so three-betting with such hands after someone has raised is recommended.

Tournaments are different, of course, especially when differing stack sizes might encourage a big stack to pressure a smaller one with a “light three-bet” or reraise with a lesser-strength or speculative hand. And sometimes in cash games players with position or with an idea they can push a preflop raiser off a hand either before or after the flop by making a show of strength with a preflop three-bet will reraise with a wider range of hands, too.

Even so, on its surface a three-bet — whether before or after the flop — represents a strong holding, and so from there you must determine the chances a player might be representing something other than what he or she actually has when proceeding.

In an installment of “Ivey Stories,” PokerNews spoke with the U.K. pro Paul Jackson about a famous televised hand he played against Phil Ivey a decade ago when the pair were heads-up at the Monte Carlo Millions.

With the blinds 10,000/20,000 and Ivey enjoying a big lead versus Jackson with about 4 million to Jackson’s 1 million. Jackson limped in from the button with

, and the two watched the flop come

Neither player had a piece of the flop, but both were continuing with their aggression as Jackson four-bet to 470,000 total. Ivey paused again, asked what Jackson had left, then after about a minute said he was all in (a “six-bet shove”), finally earning a fold from Jackson. (Ivey went on to win.)

Watch and listen to Jackson talk about that hand, including his reference to the fact that “at that time, because it was so long ago, it wasn’t called three-betting and four-betting” — an allusion to the fact that those terms have only recently come into vogue in no-limit hold’em.

The Weekly PokerNews Strategy Quiz: “Snowing” in the Summer