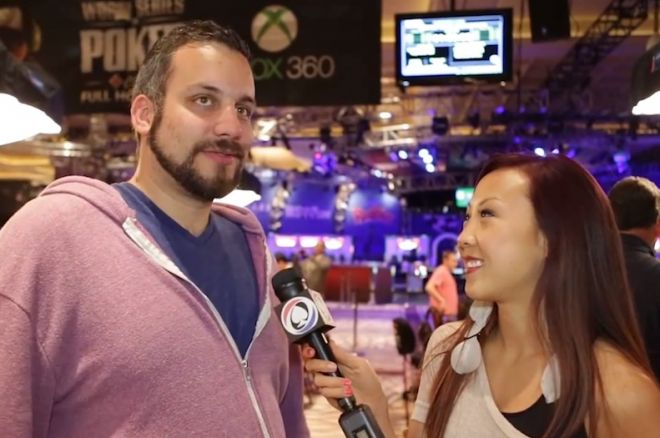 Each week, the Talking Poker series highlights a particular poker term. We’ll give you a clear, to-the-point definition of the term and an example of the strategic concept to which it refers, so that you can start using the term and implementing the related strategy into your game. Today we’re focusing on “variance” and its strategic relevance to poker.

Sometimes broadly used as a synonym for luck, “variance” in fact more specifically refers to the statistical measure of how much results can differ from expectation. When applied to poker, the term most often refers to the relative volatilty of a particular situation, a specific game, or a style of play as reflected in the bankroll “swings” (both up and down) a player endures. E.g., “By playing many hands and employing an aggressive style, he plays a high variance game.”

Variance is not a measure of how well you play, but of how much your results can vary when compared to expectation. Variance can be favorable for you and lead to short-term success and streaks of winning, or it can be unfavorable and cause you to lose more often.

Over the course of several cash game sessions a player finds himself involved in 10 preflop all-in encounters in which he holds pocket aces versus an opponent who has pocket kings. In each of those hands he and an opponent have each contributed a $100 stack to create a $200 pot.

However it turns out that in actuality he only wins 5 out of the 10. His expectation had been to earn about an $600 profit in these 10 hands (after winning 8 and losing 2), but in reality he endured unfavorable variance and only broke even.

As suggested by the example of the player losing 5 out of 10 times with pocket aces versus pocket kings, one important strategic consideration when it comes to variance is to be mentally prepared for unfavorable outcomes. All poker players have experienced losing a hand — or many hands — after being favored to win. Being able to accept these negative outcomes and continue to play well is crucial to long-term success.

Other strategic considerations stem from the different conditions that can cause an increase in variance. For example, being able to recognize and respond correctly to high variance situations can increase your chance of success.

As noted above, certain playing styles can be higher variance than others. Someone with a loose-aggressive style plays hands more frequently than the average player, and when playing those hands will more often bet or raise (be aggressive) than call or check (be https://www.pokernews.com/pokerterms/passive.htm). That style can result in a higher variance for that player given that he likely will be vying for more pots — and often bigger pots — than will those who aren’t as loose or aggressive.

You might find yourself in an especially loose game in which many players are calling raises, seeing flops, and taking risks. Such a game will also likely produce higher variance than would occur in games with tighter players.

Certain poker variants are known to produce higher variance than others as well — e.g., pot-limit Omaha is a game that can feature high variance resulting in wide bankroll swings for those who play it. Tournaments with fast structures such as the turbo tournaments discussed last week can also frequently produce high variance situations as shallow stacks force players into more preflop all-in situations than occur in slower-structured, deep-stacked events.

In fact, tournaments in general are often described as higher variance than cash games, generally speaking, although both playing style and relative skill obviously matters in both.

With the 2015 World Series of Poker just days away from starting, thousands will be participating in the many low buy-in events on the schedule such as the $565 Colossus (Event #5) that begins this Friday.

A couple of summers ago Kristy Arnett spoke with poker pro Adam Levy about strategy for low buy-in WSOP events, and he noted in particular how “you don’t need to take some super high variance route” to succeed in these events.

As Levy explains, being able to recognize how stack sizes and structures allow players to be patient even in these low buy-in WSOP events can help them avoid taking unneeded risks — something even more relevant this year given the deeper starting stacks in these tournaments. Take a look: