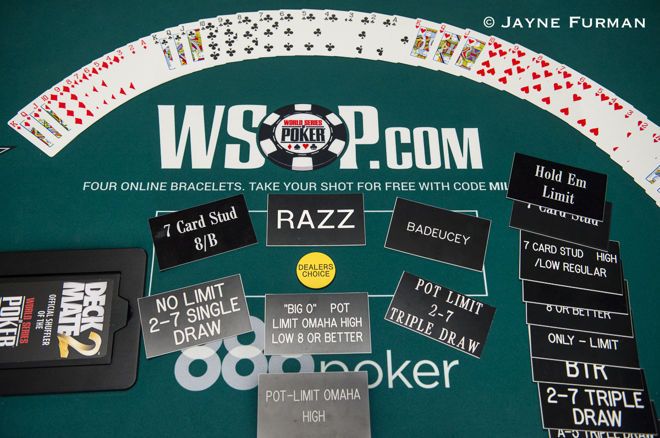 The World Series of Poker introduced the "Dealer's Choice" format in 2014 with a single $1,500 buy-in event.

After that, the World Series has continued to include Dealer's Choice events on the schedule every year since.

In this guide to Dealer's Choice poker games, you'll learn:

1. What is Dealer's Choice Poker?

In Dealer's Choice poker games, players take turns selecting a game (from a list of pre-approved games) to play for one orbit.

Unlike other multi-variant mixes such as H.O.R.S.E. or the 8-Game mix where the order of games to be played in a rotation is predetermined, in Dealer's Choice the games played at any given table will depend on the players at that table and their particular game preferences.

In Dealer's Choice poker, the rotation of the games depends on the players and is not pre-determined.

Allowing individual players to select which games are to be played from orbit to orbit has an interesting impact on game dynamics that is unique to this type of event.

Players often need to balance a number of considerations in their game selection strategy, including:

And here I'm just naming a few of them.

The ability to assess quickly and accurately the relative level of expertise of one's opponents in each of the different disciplines would undoubtedly be an extremely valuable skill for any player to have in a Dealer's Choice poker tournament.

2. How to Pick Your Game in a Dealer's Choice Event

Back in 2018, Sasha Salinger caught up with two-time WSOP bracelet winner Adam Freidman right after his victory in the $10K 6-Handed Dealers' Choice Event.

In the video, Friedman shares some interesting insights on how to choose the games to play in a dealer's choice event.

Watch the entire clip to discover how your stack (and those of your opponents) can play a crucial role in choosing the right poker games in a Dealer's Choice event.

Basic tips and strategies for some of these games can be found in the suggested readings at the end of each section.

We've been thinking outside the "hold'em box" these last few weeks, but we might as well start with the three hold'em variants included in the 20-game "Dealer's Choice" poker menu.

Most readers are no doubt familiar with hold'em games where players are dealt two hole cards with which they try to make the highest-ranking five-card hand along with the five community cards shared by all players.

The main difference between the three variants noted above is the betting structure employed.

Whereas in no-limit hold'em there is no limitation on the amount that can be wagered at any given time, there are restrictions on the sizes of bets and raises in both the limit and pot-limit variations of the game.

Here's a tip — Be aware that the value of speculative hands (e.g., small pocket pairs and suited connectors) diminishes as greater restrictions are placed on bet sizes.

READ ALSO: The Ultimate Guide to ALL Texas Hold'em Hands

For example, while there certainly will be situations where playing a hand such as

in no-limit hold'em (NLHE) can be very lucrative — you may be able to win the entire stack of an unsuspecting opponent on a favourable board — in limit hold'em the pots won will typically be much smaller even if you happen to make the best hand.

The limit structure can also sometimes make it more difficult to execute bluffs successfully when you miss.

How to Play Texas Hold'em. A guide to help beginners learn the ropes of the game. Here's where you find all the essentials to become a good Texas Hold'em player.

The Importance of Position in Poker. PokerNews' own Giovanni Angioni illustrates all the different positions at the poker table and shows you how to use each one of them to gain an advantage over your opponents.

In the first four games listed above, players are each dealt four hole cards rather than two, and as is the case with NLHE a board of five community cards is dealt that is shared by all players.

Big "O" is a relatively new addition to the Dealer's Choice slate of games. It is an action-packed variation of PLO, played with five hole cards rather than four.

Here's a tip — Be aware that the more hole cards that are dealt to each player, the stronger the hands that can be made will be.

In other words, in Omaha games NLHE players will need to adjust their expectations of what they consider to be strong hands.

For example, flopped bottom sets and straights are not as strong in Omaha variants as compared to NLHE and can easily be overvalued, especially when the player's hand affords no possibility for improvement to an even stronger hand and the pot is being contested multi-way.

Omaha Poker Rules. Read the rules of the game to find even more real-life examples of play and hands.

What is PLO Poker? A Beginner's Guide to PLO. PokerNews UK Chief Editor Matthew Pitt shares his PLO knowledge in one of the best beginner's guides of its kind.

How to Play Omaha Hi Low. Since Dealer's Choice poker games don't include only PLO, here's a guide to the hi-lo variant of the game.

These stud variants in the Dealer's Choice slate of games all follow a fixed limit betting structure.

In stud games, players are dealt their own individual boards of cards. Each player receives two hole cards face down, four cards face up and visible to all, and a final card face down for a total of seven cards.

In razz, the object is to make the lowest five-card hand from a player's seven available cards.

In seven-card stud, the object is to make the highest five-card hand, using standard poker rankings.

In the "no qualifier" version of this game, the pot is always split between the best low and high hands, whereas the "eight-or-better" version institutes a low hand qualifier: if no low hand better than 8-high can be made, then the best high hand wins the entire pot.

Here's a tip — Pay attention to the upcards of your opponents at all stages of a hand.

Against opponents who are contesting the pot with you, nearly two-thirds of their boards will become visible, allowing you to assess the range of hands they are likely to hold.

It is also important to take note of the upcards of players who fold at some point after the initial deal.

For example, if you are drawing to a straight or a flush and you see that many of your outs have been already exhausted, you should take that information into account when determining whether or not to continue pursuing your draw.

How to Play Razz Poker. An introductory course to RAZZ to read ahead of your first Dealer's Choice poker game.

Seven-Card Stud Strategy Tips. This guide by Ashley Adams examines all the most popular strategies to win at seven-card stud and gives you precious insights on what works and what doesn't.

In both of these games, there is no cap on the maximum amount of any given wager, similar to NLHE.

That said, despite this lack of a restriction on bets and raises, as there are only two betting rounds these games are usually not as volatile as other pot-limit or no-limit poker variants.

These two variants can generally be thought of as opposites of one another.

Aces count as high, undesirable cards in all "deuce-to-seven" games, and flushes and straights are similarly unwanted.

Here's a tip — The value of position in these games cannot be overemphasised.

Since none of your opponents' cards is visible, the only concrete information you will typically gain regarding the strength of their hands is the number of cards drawn.

Playing in position can, for instance, provide you with options in situations where you are faced with a choice to keep certain cards, or discard them in an attempt to make a better hand.

Also, you will find that it is difficult for players to make very strong hands when only a single draw is available.

On average, hands such as two pair or even an unimproved big pair will win a fair share of pots in five-card draw. See my 2-7 draw article (linked to above) for a discussion of expected hand strengths for that game.

5-Card Draw Rules. For how simple this game might be, you should not get on a Dealer's Choice game if you haven't had a good look at the rules first.

In 2-7 and A-5 triple draw, players are each dealt five cards, and have three drawing opportunities to try to make the lowest possible hand.

The difference between the two variants lies in the ranking system used.

Aces are undesirable cards, and flushes and straights count against hands.

By contrast, in A-5 triple draw, aces count as low, desirable cards, and straights and flushes are ignored. Therefore,

(regardless of suits) is the best hand in A-5 triple draw.

In Badugi, players are also given three drawing opportunities to make a low hand, but only four cards are dealt to each player in that game.

The object of Badugi is to try to make the lowest possible hand consisting of four uniquely ranked cards with all four suits represented.

Badeucy and Badacey are both cash-game favorites, both being split-pot versions of regular Badugi.

The other half of the pot in both Badeucy and Badacey is awarded to the best Badugi hand that can be made from a player's five cards (i.e., the four lowest cards unique in rank and in suit, or fewer if only incomplete Badugi hands can be made).

Here's a tip — In "deuce-to-seven" games such as 2-7 Triple Draw and Badeucy, most playable starting hands will include a deuce, since most of the highest-ranking low hands contain a deuce.

Also, in split-pot variants such as Badeucy and Badacey, having low-ranked rainbow cards in a starting hand is extremely valuable — if you improve to a strong Badugi hand quickly, you may well have several "free" chances to improve to a sufficiently strong five-card hand that could earn you the entire pot.

How to Play Badugi. Poker writer Ken Lo takes us on a fascinating journey to discover the Badugi poker game.

Now that you know what are the Dealer's Choice poker variation you might be asked to play or choose from, it's time to look at how to use the best online poker sites to practice and get ready to beat your opponents.

Practising all these different poker games at a card room would be nearly impossible.

It would take forever for you to master the different variants and you'd risk to lose a lot of money while at it.

Play all the Dealer's Choice poker games at your own pace and use the bonuses you find here on PokerNews to keep your bankroll safe.

The poker sites in the list below are the best ones in the industry to play all the variants on this page and get ready for your Dealer's Choice poker games.

Ken Lo is the author of A Poker Player's Guide to Mixed Games: Core Strategies for HORSE, Eight-Game, Ten-Game, and Twelve-Game Mixes, He is based in Toronto, Canada. Follow him via the book's Facebook page and on Twitter @ppgmg.

Increase Your Chances Of Winning a Freeroll Tournament