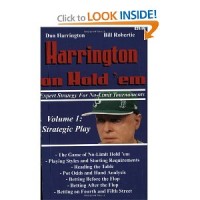 Poker has taken America by storm. But it s not just any form of poker that has people across the country so excited it s no-limit hold'em the main event game. And now thanks to televised tournaments tens of thousands of new players are eager to claim their share of poker glory.

Harrington on Hold'em takes you to the part of the game the cameras ignore the tactics required to get through the hundreds and sometimes thousands of hands you must win to make it to the final table. Dan Harrington's sophisticated and time-tested winning strategies, focusing on what it takes to survive the early and middle stages of a no-limit hold'em tournament, are appearing here for the first time in print. These are techniques that top players use again and again to get to make it to final tables around the globe.

Now, learn from one of the world s most successful no-limit hold'em players how to vary your style, optimize your betting patterns, analyze hands, respond to a re-raise, play to win the most money possible, react when a bad card hits and much, much more.

Harrington won the gold bracelet and the World Champion title at the $10,000 buy-in No-Limit Hold'em Championship at the 1995 World Series of Poker. And he was the only player to make it to the final table in 2003 (field of 839) and 2004 (field of 2,576) considered by cognoscenti to be the greatest accomplishment in WSOP history. In Harrington on Hold'em, Harrington and two-time World Backgammon Champion Bill Robertie have written the definitive book on no-limit hold'em for players who want to win ... and win big.