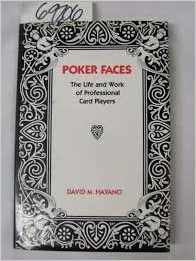 Poker Faces: The Life and Work of Professional Card Players

Long forgotten and, sadly, out-of-print, this book released more than 30 years ago began as a doctoral thesis, that became something far greater. During the early 1980s, writer and graduate student David M. Hayano spent more than a year mulling in and around the low-rent district of Gardena (California), even playing in the self-dealt draw poker games. He was eager to learn about the kinds of people who spent countless hours doing little more than playing cards and wanted to know more what motivated them to spend much of their lives doing this. A book that could have simply remained an academic exercise became a well-focused (some might say shocking) snapshot of the poker subculture at that time. What's really special is, this is the anti-Alvarez book (released at about the same time). There are no poker legends or gold bracelets in the pages of this book. It's about the broken dreams of nickel and dimers. The game is probably way too diverse to write something like Hayano did, nowadays. Thankfully, he did complete the project, published a book, and ended up giving us the first real portrait of what we know today as a modern cardroom, which is accompanied by some remarkably interesting details about the lives of the people Hayano met. A forgotten and underappreciated classic.