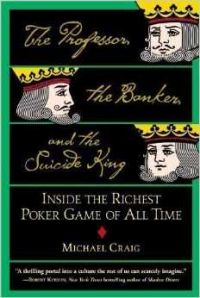 The Professor, the Banker, and the Suicide King: Inside the Richest Poker Game of All Time

In early 2001, a stranger from Texas started playing high-stakes poker at the Bellagio Hotel & Casino on the Las Vegas Strip. No ordinary novice, Andrew Beal owned one of the most profitable banks in Texas and relished challenges posed by hobbies such as advanced math theory and rocket science.

Within months, Beal locked the world's top professional poker players in combat. He played them "heads up," the pros combining their bankrolls and taking on the newcomer one at a time. Minimum table stakes: $1 million. Beal offered the pros the richest poker game ever played and even as he demonstrated this formidable skills, they hungered to take him on.

For three years, Beal ratcheted up the stakes, developed a world-class heads-up Texas hold 'em game, and devised unorthodox ways off cutting into the pros' advantage. On a few occasions, he left Las Vegas disgusted by his losses. On others, he threatened to win the combined playing bankroll of every high-stakes poker player in Las Vegas.

Even though the pros saw their edge slip to almost nonexistent, they continued to engage Beal at ever-higher stakes. The players' livelihoods and Beal's ambitions collided in May 2004 in a game where the bets started at $100,000 per card and the winner could carry away more than $20 million.

THE PROFESSOR, THE BANKER, AND THE SUICIDE KING opens the door to a world much imagined but never seen. With poker's surging popularity as a backdrop, its most able practitioners demonstrate the precariousness of their profession, where one wrong move, even at the pinnacle of their success, can pave the road to ruin. It is a world of outsized skills, egos, and ambitions.