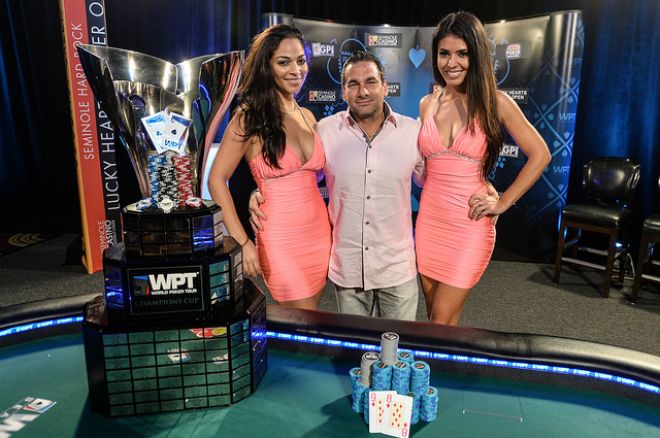 For years, James Calderaro traveled the poker circuit and came up just shy of a career-defining victory. In 2009, he finished 13th at the World Series of Poker Main Event, falling a few spots short of the elusive November Nine. A year later, he took third in the WSOP $10,000 Pot-Limit Hold'em Championship. And in 2012, he finished second in the World Poker Tour Jacksonville Main Event.

Finally, on Tuesday, Calderaro found the winner's circle on his home turf.

Calderaro outlasted a field of 415 to win the 2014 World Poker Tour Lucky Hearts Poker Open at the Seminole Coconut Creek Casino for $271,103. The Florida native bested a tough final table that included Shannon Shorr and Keven Stammen, eventually overcoming a chip disadvantage against Shorr to claim the first major tournament title of his career.

Calderaro entered the final table third in chips and was active early, but it was chip leader Dimas Martinez who played executioner within minutes after the action commenced. According to the WPT Live Updates, Calderaro raised to 56,000 from middle position (blinds 12,000/24,000/4,000) and Martinez three-bet to 156,000 from the cutoff. Evan Dollinger then four-bet all in from the big blind for 592,000, and after Calderaro folded, Martinez called.

Dollinger was in great shape to double, but fate wouldn't have it as the board ran out

to give Martinez a set. Dollinger, playing at his first WPT final table, exited in sixth place for $54,355.

, which was slightly ahead of Kegel's

. Kegel took control on the

on the turn gave Shorr outs to a flush. Sure enough, the

on the river completed the four-flush and eliminated Kegel in fifth place for $67,842.

Shorr took the lead from Martinez on Hand #56 of the final table, and it all came crashing down for the former chip leader a short while later. With the blinds at 20,000/40,000/5,000, Stammen raised to 90,000 from the button and Calderaro three-bet to 240,000 from the small blind. Martinez announced an all-in bet worth 1,615,000 from the big blind, which prompted Stammen to fold. Calderaro called, creating a massive pot.

It was a flip for more than 3.4 million, and Martinez needed to improve to stay alive. However, the

board failed to hit his big slick, and Martinez was send to the rail in fourth place with $90,366.

flop appeared safe for Stammen, and the

left him needing to fade a nine to stay alive. But the

drilled the river, pairing Calderaro and sending Stammen out the door in third place for $122,197.

Calderaro began the heads-up match at a slight chip disadvantage (6.5 million to 5.9 million), and a long battle against Shorr ensued. The two players exchanged the chip lead several times, but it wasn't until the 104th hand of heads-up play that a player was all-in and at risk.

Shorr's aces had been cracked as Calderaro flopped two pair, and the

river gave Calderaro a stranglehold on the tournament with 11.9 million in chips to Shorr's 535,000.

Shorr doubled up on the next hand to stay afloat, but it was all over a hand later. Calderaro moved all in with

from the button and Shorr called with

. The board created a flurry of emotion as it rolled out

, giving Calderaro a flush on the river to secure the title and the $271,103 payday.

For Shorr, who was recently named one of the top 10 players of the decade by the Global Poker Index, he'll have to wait another event for a chance to win his first tournament on the World Poker Tour. He received $190,039 as a consolation prize.