Behbehani Doubles With Queens Through Aces

Longtime online grinder "bencb789" has won the inaugural $102,000 Super High Roller during the World Championship of Online Poker on PokerStars, the biggest buy-in online tournament in the history of the game.

He beat none other than Fedor "CrownUpGuy" Holz heads up after the two had made a deal. Both walked away with a million plus. The only other in the money finisher was start-of-the-day chip leader Salman "salfshb" Behbehani who finished third for $560,000.

After an exhilarating first day, Day 2 got underway at 12:30 Eastern U.S. Time and the players didn't hold back. While Behbehani suffered some connectivity issues, short-stacked Kurganov was already all in the second hand of the day, though no one called.

Mikita "fish2013" Badziakouski would be the first to go. "bencb789," a German player out of Sweden, raised and Badziakouski called in position before Holz over called from the big blind. "bencb789" made a continuation bet on a king-queen-six rainbow flop and both Badziakouski and Holz called. A seemingly harmless deuce hit the turn and Holz and "bencb789" checked. Badziakouski bet and just Holz called. The river was another deuce and Holz checked for the third time. Badziakouski bet almost pot, leaving himself just four big blinds behind. Holz check-raised all in nonetheless and after some heavy tanking, Badziakouski called with pocket aces. Holz showed king-deuce for a flopped top pair that had backdoored into a full house.

With play now five-handed, Salman "salfshb" Behbehani was almost the next to go. He got it in with queens versus the aces of "bencb789" but spiked a king on the river to make a straight and survive.

Igor "lechuckpoker" Kurganovwould finish in fifth eventually. As the shortest stack still left in the tournament, he limped in from the small blind. His neighbor, Fedor Holz, bumped it up a bit and Kurganov called. Kurganov continued to check-call a bet on jack-eight-deuce and check-called all in on the ten-turn. Kurganov tabled queen-jack for top pair, Holz showed nine-five for nothing but an open-ended straight draw. Kurganov hit the rail as a seven on the river gave Holz a straight.

With four players remaining, the tournament was on the bubble. While Behbehani was still dealing with some internet issues, the action got fast and furious. None other than Fedor Holz himself eventually busted the bubble, putting a bad beat on Isaac "philivey2694" Haxton to end it all.

The Bubble Bursts: Isaac "philivey2694" Haxton Eliminated in Fourth Place
Action folded to Fedor "CrownUpGuy" Holz and he moved all in to put the pressure on Haxton. Haxton called for 90,225 with pure Phil Hellmuth speed, as quick as possible.

, just about as exciting as it could come. Haxton flopped top set but he was in no way in the clear as Holz had flopped a flush draw and backdoor straight draw. The

on the turn improved Holz's outs and, in tradition with how Holz has been running in 2016 so far, the river came the

to complete his flush. 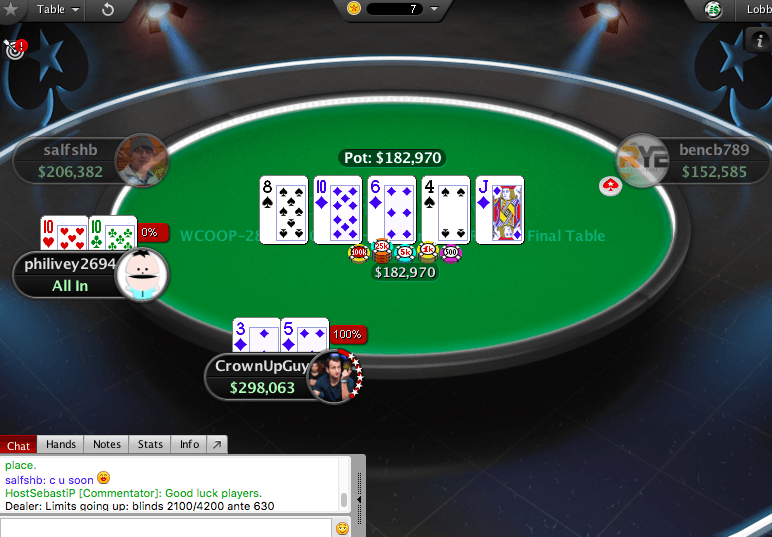 The three remaining players played for just a bit before the next big clash occurred. Coincidentally, it was also the next bad beat of the tournament. Salman "salfshb" Behbehani and "bencb789" got it in before the flop with ace-king (Behbehani) versus ace-queen ("bencb789"). A queen on the flop meant it was all over for Behbehani and he had to settle for third place, worth $560,000.

With just Fedor "CrownUpGuy" Holz and "bencb789" remaining, play was paused on their request. Holz did the talking and asked for a look at the chip chop numbers. As soon as PokerStars host "SebasiP" had communicated the deal offer, Holz had already typed 'I agree.' "bencb789" followed with the 'I agree,' seconds later. "bencb789" secured himself $1,116,360.60 while Holz was guaranteed $1,067,639.40 from that moment on.

The two played on for $56,000 and the WCOOP title, but it didn't take long for the tournament to end. Holz looked to push the action and eventually played bet over bet over bet in a huge pot on a just about a complete bluff in the fourth hand of the mano-a-mano battle.

and made his exit into second place.

for not much of anything.

Swedish player "bencb789" (460,601 in chips) and German player Fedor "CrownUpGuy" Holz (379,399 in chips) requested the host to pause the tournament to take a look at the numbers. A deal was quickly agreed on.

A 5-minute break before the tournament commences.

Holz was quick to fold but Behbehani had bigger plans and moved in for 163,282. "bencb789" thought about it for a bit before calling.

on the turn gave him some additional outs to now come from behind, but the

on the river wasn't one of the cards he was looking for. 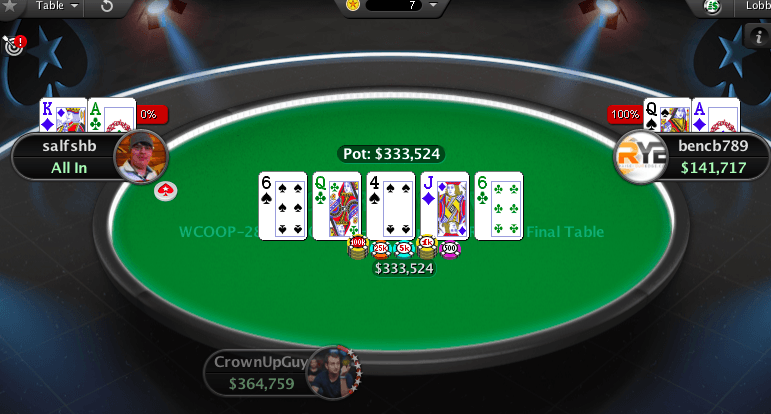 "bencb789" limped in and Fedor "CrownUpGuy" Holz checked to see a flop heads up.

hit the turn. Both players checked to see the

turn and Holz called. The

completed the board and "bencb789" and Holz both checked. " bencb789" tabled

Fedor "CrownUpGuy" Holz raised to 9,450 from the button and "bencb789" made the call from the big blind.

completed the board and both players checked. "bencb789" showed