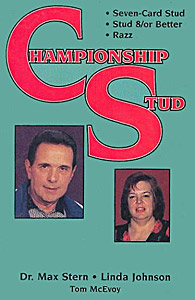 Championship Stud is the definitive guide to winning at all three variations of seven-card stud. Dr. Max Stern, Linda Johnson, and Tom McEvoy have earned millions of dollars in major tournaments and cash games. Between them, they have won eight World Series of Poker bracelets and hundreds of other titles in competition against the best players in the world. In this book they put their heads together to bring you their best advice on how you can make more money at seven-card stud, stud 8/or better and razz.