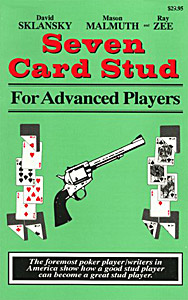 Seven-card stud is an extremely complex game. Deciding exactly what the right strategy should be in any particular situation can be very difficult. Perhaps this is why very few authors have attempted to analyze this game even though it is widely played. In 1989, the first edition of this text appeared. Many ideas, which were only known to a small select group of players were now made available to anyone who was striving to achieve expert status, and a major gap in the poker literature was closed.