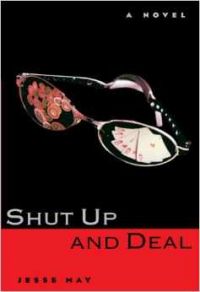 Shut Up and Deal: A Novel

In 1987, there was legalized poker in Nevada and in one county of California. Author Jesse May was seventeen years old and already hooked. By 1996, poker could be legally played in casinos in over twenty states of the union and five countries in Europe. Legalization changed the face of poker, and as the game came of age, so did May, who by 1989 had dropped out of the University of Chicago after one year due to irreconcilable differences between Tuesday- and Thursday-morning classes and Monday- and Wednesday-night poker games.

Based on his experiences in the strange world of poker, May's debut novel Shut Up and Deal is the story of a nontraditional '90s slacker, a dropout with an incurable obsession and incredible stamina, who makes a career in a profession where the only goals are to stay in action and to not go broke. In Shut Up and Deal, a professional poker player takes readers along on his adventures over several years in and out of casinos and card rooms in locales such as Las Vegas, Atlantic City, and Amsterdam.

Told in a catching, likeable voice, this story offers up one rip-roaring poker-table drama after another, with narrator Mickey ultimately finding himself in a spot that jeopardizes his entire bankroll and calls into question his morals, such as they are. In rhythmic, high-octane prose that is as addictive as the game it describes, Shut Up and Deal zooms in on the swirling, feverish microcosm of the contemporary poker world from its very first line and never cuts away.