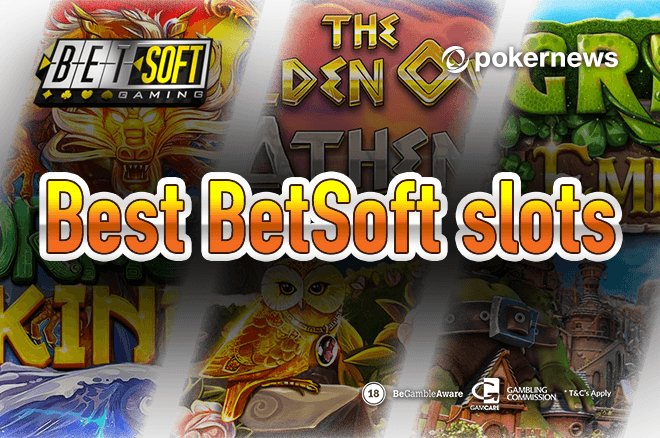 Betsoft Gaming has been at or near the top of the leading online Casino games providers for some time now.

This developer has an impressive collection of online gambling games which can be played at multiple real money Casinos.

But which Betsoft video Slots are the best? It’s high time we found out.

The Best Betsoft Slots for Real Money in 2019

The games on this list of the best Betsoft Slots meet these criteria:

Do you know want to see what happens if you put all the world's richest people around the same table?

The Tycoons Slot machine by Betsoft Gaming is SO RICH that it doesn't even feature a 'Spin' button. It has a shining red Ferrari instead.

Click on the Ferrari while you enjoy the cool fountain outside your villa and have fun with this 95.34% RTP Slot where all the characters are exactly what they look like: rich.

Launched in March 2014, More Gold Diggin' is a fun and action-packed video Slot by Betsoft gaming with an RTP of 94.53%.

While the return to player isn't excellent, graphics, animations, and features are what make this game special.

Go down the gold mine with the two odd brothers in the game and enjoy More Gold Diggin's exploding reels, a fun feature that works like the cascading reels you see on popular NetEnt Slots.

Mamma mia is the best food-themed Slot you can ever play. Graphics and animations are great like in most Betsoft games, although the storyline of this one is even funnier than usual.

Help the loud and outgoing Italian chef prepare his famous culinary masterpieces and let him help you get good winning combinations as the reels move on the screen.

Don't forget to scream "Mamma Mia!" as loud as you can when you hit a big win!

I'm not sure Carlo Collodi would have approved a Betsoft Gaming's (excellent) Slot based on his timeless masterpiece…but I am glad Betsoft did it.

Play this game ti discover all its exclusive features, from the Fairy Spins to the Pinocchio Wondering Wilds.

This video Slot launched in 2012 still beats most of the newest 3D games you can play today at Betsoft Casinos.

The game is as spooky as it is fun, with green monsters ready to scare you with generous wins and surprises. In fact, the game is so good that I kept on playing even if I didn't win much.

Under the Bed is one of those fun modern Slot where you will keep on playing just to see what happens next.

Yak, Yeti and Roll is one of the newest Betsoft Slots, released at the end of 2018. And it’s one of the most unique Slot games, too.

Every time you win, the new symbols replace the winning ones without you making an extra bet. And Yak and Yeti drive the snowmobile to move the reels. That triggers multipliers, free spins, cash prizes, and other perks.

And let’s not forget that you can always buy 18 free spins with 4x multiplier. Just in case you’re not patient enough to wait for the bonuses.

Featuring wild symbols, free spins, and Drinking Bonus, this Slot has many ways to reward you even if you’re not on holidays. Plus, an RTP of 97.1 percent will make you feel as if you are.

Land beach ball on the reels to get eight free spins. Clingy wilds will stick for the feature to help you win even more.

If you land three Red Cup symbols, you’re in for some beer pong with a twist. Guess the coin flip outcome right and your opponent will drink and you will win. If the guess is wrong, you will drink and, sadly, lose the bet.

Blood Eternal is the best Betsoft Slot featuring monsters. The vampires, to be exact.

You get six reels filled with blood, ancient symbols, poison, Dracula-like castle, and 30 paylines that pay both ways.

When you align human and vampire symbols next to each other on the reels, blood is spilt and eight free spins activated. If you land bats, you can win multiplier up 12 times your bet.

Chilli Pop is another new Slot by Betsoft. Rather than paying per payline, it pays for symbols that land in clusters of three and more.

Mule symbols can trigger up to 26 free spins. During the feature, Mule symbols can expand the playing area with extra reels and rows, each adding possibility to trigger more wins.

The pinata is wild and cheerful veggies are the regular symbols. When they land in the cluster, they explode and you win. New symbols take up their place to possibly trigger new wins without you making an additional bet.

The Golden Owl of Athena

The Golden Owl of Athena will take you to the ancient Greece where the gods and heroes still roamed the Earth.

Do you know how to access the Pantheon of gods? Spin your way to it!

The Golden Owl acts both as wild and scatter symbols. When you land three or more - you get Scatter wins, all the other times it substitutes other symbols. Plus, the Golden Owl Free Spins symbol can get you up to 20 free spins.

Slots set in ancient China are perennially popular and Dragon Kings is no exception. The game features four dragon symbols. And the really cool thing is that they're all wild, increasing the chances of you getting to a bonus game.

In the center, the Dragon King offers a 2x multiplier to really send your winnings into the stratosphere. With an RTP of 95.20 percent, this is a Betsoft game that will really leave a positive impression.

Safari Sam takes you to the African plains, with animals that are wild in more than one way. Wild animal free spins are plentiful and will give you many chances to win each time you play.

Collapsing symbols stacks add to the dynamic nature of the Slot. Plus, random multipliers are hiding all over this five-reel, 30-line Slot, guarded-over by a dozy gamekeeper and a local girl who keeps on creeping up on him.

It's good, clean cartoon fun that will make you smile, as Betsoft Casino games always do.

If you don't instantly shout "Copacabana!" after hearing the title of this game, then you're probably younger than I am.

Gratuitous Barry Manilow references aside, this is a salsa-themed Casino Slot offering up to 430,000 credits each time you play.

The bonus round takes the form of a dramatic dance-off, with Carolina, and her dance partners or rivals, Rico and Pedro.

One of the highlights of this game is its RTP of 97.42 percent.

If you can get past the rather questionable stereotyping of the Travelling community, you've got yourself a great game here.

Mostly because it’s high RTP can compare to many rival Slots, both from Betsoft and other developers. Gypsy Rose offers 97.63 percent return.

The multiple bonus games will also keep you coming back, on your desktop or mobile device, as this is a mobile Slot to be reckoned with.

Based on a story that you'll probably recognize without too much of a struggle, Ogre Empire is one of the newest Betsoft games. It has an RTP of 95.22 percent, and a jackpot of 25,000 coins.

When the Ogre smashes a stone symbol, you win money. But when he's asleep, the townsfolk bring royal rewards. This only happens at night, but it’s well worth watching out for.

Reels of Wealth is one of the higher-paying Slots the company has made, carrying with it a 67,400-coin maximum win.

Each time you win, you get a re-spin, leading to potentially huge rollover victories when you're playing.

Get the Vault of Wealth scatter symbol and you'll get an immediate payout. Land on the Megastar Jackpot, and you'll reach a bonus game where four jackpots are up for grabs.

It’s not a secret that Betsoft has some of the best retro Slot machines. And Jumbo Joker is the best of the kind, a treat for all the classic Slots fans.

Jumbo Joker is a modern-day reboot of fruit Slots, featuring lemons, watermelons, cherries and all the other classic symbols. It also has only three reels and three rows, a total of five paylines.

Tiger’s Claw is no ordinary Casino Slot. It has 720 ways to win and up to 240 free spins to trigger if you land the golden Tiger's Claw.

The structure of the game is unique, too - a 3-4-5-4-3 reel formation that can get you winning combinations in many different ways.

Sequel to the colourful Sugar Pop, this takes you to a gluttonous candy-land of various neon-coloured sweets. All of which can, in the right combination, win prizes for you.

With a 7x7 setup on the reels, this is not a traditional Slot. You can win up to a maximum of 28,305 coins. An RTP of this Slot reaches 96.42 percent. Watch out for the special candies which come onto the board in a chocolate egg.

Legend of the Nile

If you think you’ve tried everything related to Egypt Slots, think again.

Follow the footsteps of the Egyptian gods, each being a high-value symbol. And you may have a chance to trigger up to 400x multipliers are possible or win up to 112,270 coins on this brilliant Ancient Egypt-themed Slot.

From Egypt to Savannah. Stampede is now a classic Betsoft Slot. Featuring elephants, giraffes, gazelles, and zebras that pay you when you land them on a payline

During the free spins round, the wild gives you a 3x multiplier. There's an enormous maximum win of 769,500 coins and the RTP isn't too shabby either - 95.27 percent.

Playing on the thought that everyone has a good and a bad side, Betsoft presents you a Good Girl Bad Girl Slot game.

It’s a multi-mode Slot, so it’s up to you to go to the side of light or the dark side.

No matter what you choose, the RTP in all cases clocks at well over 97 percent, opening prospects for winning much more than many other Casino Slots for real money.

Like the classic murder mysteries, you're in a country house, picking up clues as to who committed the dastardly crime. Each time you play, the story is slightly different, making never-ending challenges for you.

When you think you've got all the clues, head over to the bonus game. That’s where all the suspects are assembled and your chance to figure out if you are right about the killer.

Greedy Goblin takes on the annoying elves while you spin reels filled with sticky wilds, free spins, and cascading coin drops to win a greedy pot of gold.

The Slot has an RTP of 97.20 percent, making the payout really good. Especially, if you trigger the progressive jackpot. To do so, bet max and hope to land five symbols of elves.