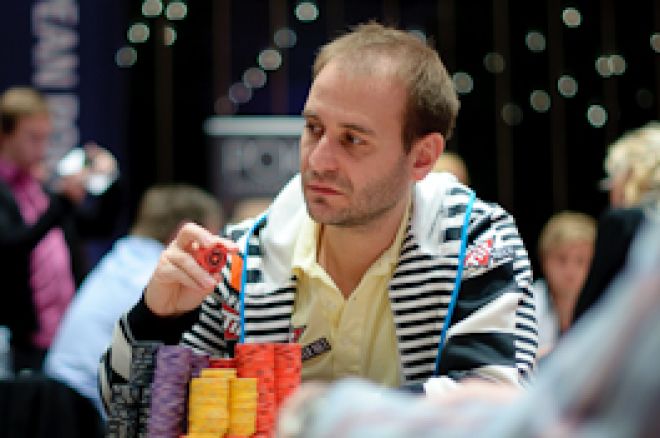 On Friday afternoon, the final 76 players returned to unbag their chips for Day 3 of the PokerStars European Poker Tour Copenhagen. The first 20 who were eliminated went financially unrewarded for their deep runs, the payout bubble finally bursting with 56 players left. At the end of more than eight hours of poker, Roberto Romanello secured his perch atop the totem pole and will lead the remaining pack into Saturday’s penultimate day.

With the chip counts somewhat polarized to start play, the early action was decisive. Romanello began the day in fifth place but was not content to tread water in that position. The Welshman got the knockout ball rolling early, his

making a Broadway on the turn of a

board. Simon Nybo was unlucky enough to make two pair with

on the river flushed the first player off to the rail.

Romanello was battling food poising, but that early knockout gave him some ammunition and momentum, and he continued the construction work on his evergrowing chip castle as the day wore on.

Despite the quick start, the field plowed headlong into a brick wall bubble. The last 57 players took a break about an hour into hand-for-hand play, and it would require nearly another full level of post-break play to end the standoff. The endless string of double-ups was finally broken when the chatty Morten Guldhammer and his

. Hopkins had been riding the short stack when a king on the flop took the rest of it and sent him away with just the ol’ wooden spoon to show for his efforts.

As quickly as it had arrived some two hours earlier, the trudging, plodding pace of the bubble was gone in a flash. Now in the money, the remaining field seemed to be in an awfully big hurry to visit the cashier. Alfio “aLFiosNob” Battisti, Yury Kerzhapkin, and Richard Grace were among those swept away in the torrent of post-bubble action, the three men disappearing below the surface in a blink.

. ElkY never showed his losing hand, but it definitely couldn't beat a full house on the board of

. The Elk was left with just a couple of big blinds, and he would soon succumb to the fight. It was his online nemesis Kristoffer “Sumpas” Thorsson who dealt the final blow — ElkY’s

never caught up to Sumpas’

. Thorsson would not fare much better better though, and he followed Grospellier to the payout desk in 36th place (65,000 DKK).

ElkY’s exit meant that the Team PokerStars torch would have to be carried by Denmark’s own Peter Eastgate. The former World Champion had a bit of a rocky start to his Day 3, doubling Julien Haution up with ace-queen against ace-king. Eastgate corrected his course quickly, though, and his stack was well above average for the balance of the day. His finishing count of 726,000 puts him firmly in seventh place and is sparking chatter about the real possibility of Eastgate winning his first EPT title on home turf.

While players continued to shuffle out, it was a two-man show atop the leaderboard with Romanello and Andrew Teng leapfrogging each other all day. Teng was moved to Romanello’s direct left late in the evening, and the two men refused to shy away from each other. In one big confrontation, Teng three-bet Romanello after he had raised from the small blind. Teng fired on the flop of

and Roberto came right along. They checked the

river. Teng tanked and tanked, and Romanello couldn’t resist flashing his airball five-seven offsuit when he finally coaxed a fold.

That pot pipped Romanello back into the lead with 1.4 million chips just as play was wrapping up in dramatic fashion on an adjacent table. Jens Sunberg was all-in preflop with

, seemingly in good shape against Guldhammer’s

fell right in the window, though, and the case

dropped on the turn just for good measure. To ensure long-lasting nightmares for Sundberg, the dealer teased him with a river

That sets the final three tables for tomorrow’s Day 4 showdown. The field will reconvene at 2:00 p.m. CET, and 16 of them must go before we can start to think about a final table and a trophy presentation. Our live reporting team is inside the ropes all week, so don’t forget to keep an eye on the blog as the action unfolds!