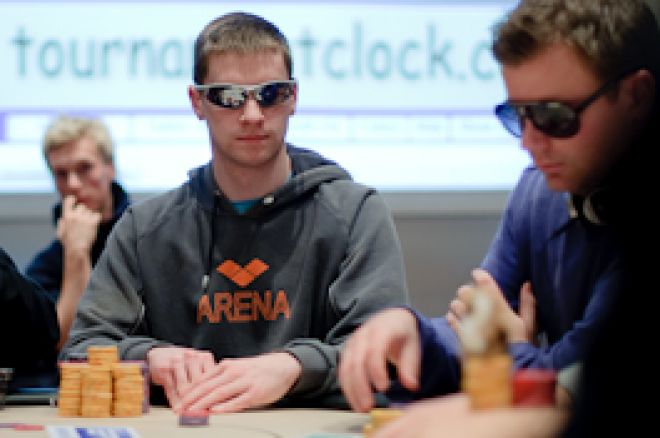 People will be very confused when they find out that the original 423 total runners morphing into 243 survivors as Day 2 of the 2010 European Poker Tour Copenhagen kicked off. Leading the pack was Canadian Andrew Pantling but hot on his heels were Team PokerStars Pros Sebastian Ruthenberg, Peter Eastgate and Bertrand "ElkY" Grospellier, as well as Juha Helppi, Ramzi Jelassi and Freddy Deeb. As always, their fortunes would be mixed.

Chip leader Andrew Pantling, probably best known for final-tabling the Irish Open last year, was among those who couldn't last the course and hit the rail before the dinner break.

The list of other notables who crashed out on Day 2 was longer than the list of notables who turn up to play many other big tournaments. Reigning champion Jens Kyllonen, Jelassi, Stefan Mattsson, Dario Minieri, Arnaud Mattern, Sami "LarsLuzak" Kelopuro, Ruthenberg, Johnny Lodden, Ruben Visser and, in the latter stages of the day, Luca "Man at the Top of the Leader Board" Pagano, all failed to progress to Day 3 and will not be seeing a return on their buy-ins.

Some folks did manage to make it through to Day 3, though.

Climber-of-the-day award went to friendly Welshman Roberto Romanello. After starting the day with just 19,000 in chips to his name, Romanello turned it into a chip-leading stack at one point. He ultimately lost pole positio but managed to hang on to most of the chips and finished with 349,200, good enough for fifth place as we head into Day 3.

Also doing well for some time was New Zealand national and UK resident Richard Grace. He was propelled to the upper echelons of the chip counts when his set of eights turned quads to outdraw Lam Son Nguyen's flopped straight. Like Romanello, Grace held on to his chips for the rest of the day and finished up with 206,900.

Kristoffer "Sumpas" Thorsson took a commanding lead at one point but dipped a little toward the end of play. He finished in fourth place. Stig Rossen, in third place, is the highest Dane on the leaderboard right now, and second place is occupied by Belgian national Fabian Gentile.

Chip leader by a long way, though, is Hungarian online qualifier Csaba Toth. With 561,900 in chips, he's the man to beat when Day 3 gets under way.

Only 56 of the 76 players remaining are going to get paid, so there's everything to fight for when play resumes. Day 3 begins at 2 p.m. CET, so join us then back at PokerNews.com to see who is victorious and who trudges home with their tail between their legs.