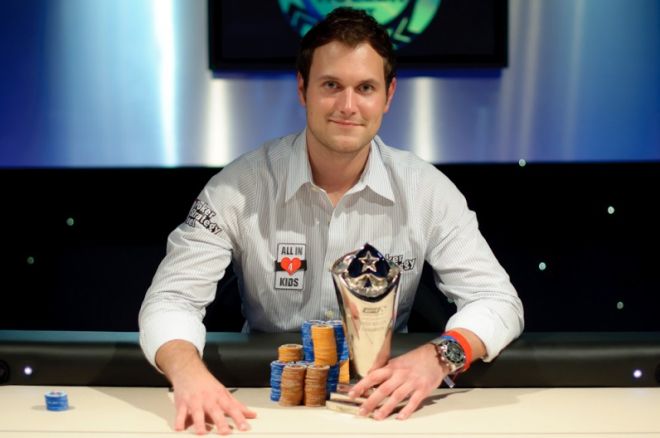 Season six of the European Poker Tour wrapped up on Saturday evening with the conclusion of the €25,000 High Roller event. From a field of 113 runners, Tobias Reinkemeier emerged as the champion at the conclusion of three long days of poker, taking home the coveted trophy and enviable €965,000 top prize.

The tough final table of eight returned to the Salle des Etoiles at Le Sporting Club in Monte Carlo to battle for the final trophy of the season. The action was instantaneous, and it took exactly one hand to reduce the field to seven. Just moments after the shuffle up and deal, short stack Michael Freidrich made his stand with

. Allen Bari made the call with

, and both players had to sweat a dramatic

That was a good start for Bari, but things would turn sour quickly. A couple of orbits later, Bari made a five-bet shove with

only to run smack into Reinkemeier's

Gregarious Dutch pro Paul Berende was the next to fall, adding a fifth-place finish (€191,200) to his impressive showing at the tail end of this EPT season. Berende was very short when he pushed in with

and was run down by Olivier Busquet's

on a board that ran

Moments later, Tom Marchese flipped a coin with Dori Yacoub in a big pot that would ultimately seal Marchese's fate. Yacoub open-shoved his

, and Marchese made the easy call with

. Yacoub flopped lucky, though, and the board of

Yacoub had his moment in the spotlight, but his bid for the title came to an abrupt end in third place (€358,000). In a raised pot, Yacoub and Reinkemeier saw a flop of

river. Reinkemeier squirmed in his chair and considered for several minutes before making the call with

for kings up. It was a good call; Yacoub showed his

on the way out the door, and heads-up play had arrived.

Reinkemeier began the duel with a small chip lead, but Busquet battled valiantly until a whale of a pot really tipped the scales. Reinkemeier mini-raised from the button and called a three-bet of 220,000. Busquet bet 240,000 on the flop and 450,000 on the turn as the board showed

rivered, Busquet fired a third bullet 560,000 chips strong. The eventual champion sized him up before moving all-in on a stone bluff with

. Busquet yielded, and Reinkemeier was able to put the final nail in his coffin just a few hands later.

Reinkemeier held pocket queens on the final hand, and they were worth almost a million Euros as the board ran

We hope you enjoyed following us around the EPT circuit this season. We've still got APPT Macau coming up in a couple of weeks and then it's all hands on deck for the World Series of Poker in Las Vegas. Follow us on Twitter and become our fan on Facebook to keep tabs on our Live Reporting team.