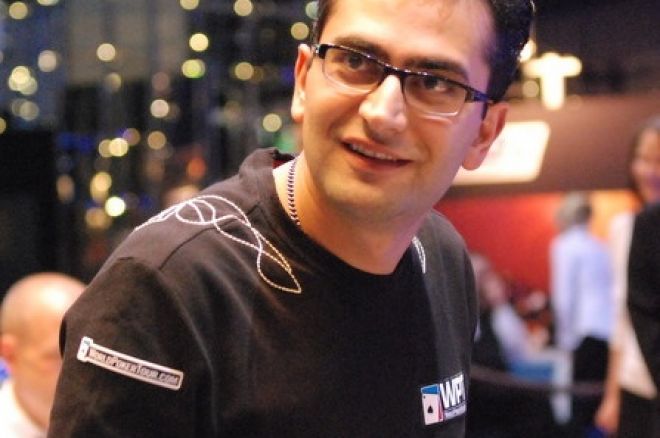 The World Poker Tour Five Diamond Poker Classic resumed Wednesday with the final six players of a 438-player field. The televised final table was one of the most stacked in WPT history and did not disappoint. The action was epic, and in the end it was Antonio Esfandiari who emerged victorious to take down the WPT title, $870,124 first-place prize, and a $25,000 WPT Championship seat.

Six players began the day at a table full of poker professionals. Leading the way was none other than Vanessa Rousso, who had built an impressive chip lead throughout Day 5. Here is how things looked at the start of the day:

Before action got underway, the crowd was kind enough to sing their rendition of Happy Birthday for Esfandiari, who happened to turn 32 on Wednesday. Tournament Director Jack McClelland even joked that Esfandiari got his “Magician” nickname after winning a WPT title in 2004 and then disappearing, much to the amusement of the audience. With a little luck, Esfandiari was hoping to put that joke to rest.

After the fun, the cards were in the air and it didn’t take long for the first elimination of the evening. On just the second hand, Rousso was under the gun and raised to 125,000 only to have Lawson move all in for 615,000. After a call, the cards were turned over:

, giving him a set. Rousso was clearly dejected but her attitude quickly changed as the dealer burned and turned the

, giving her an even bigger set! Suddenly Lawson needed to catch the last nine in the deck to stay alive. Unfortunately for him, the

appeared on the river and he was sent to the rail in sixth place with a $126,693 payday to help ease the pain.

. Rousso quickly moved all in and Robl called off his last 1.5 million with

. Rousso tabled pocket nines but fell behind as the board ran out

. Robl doubled on the hand to 4 million with his flush while Rousso took a small hit down to 5.4 million.

Not long after, Robl raised to 200,000 on the button and Rousso called from the big blind. The flop came down

and Rousso checked to Robl, who bet 250,000. Rousso proceeded to check-raise to 750,000 only to have Robl move all in for 3,860,000. Rousso tanked for about three minutes before calling the clock on herself! As time ticked down, Rousso conceded the hand and dropped to 4.2 million. Meanwhile, Robl took down the pot as well as the chip lead with 5.1 million.

The next elimination came when Racener raised to 255,000, Morrison called from the button, and Robl came along in the small blind. Both Robl and Racener checked the

. Robl was first to act and decided to move all in. Morrison reluctantly called for his tournament life and showed

only to discover that he was drawing dead against the pocket fives of Robl. The

was run out on the river for good measure as Morrison was eliminated in fifth place for $168,924.

A short time later, Racener was under the gun and moved all in for his last 1,005,000. Esfandiari was in the small blind and made the call.

. The World Series of Poker Main Event runner-up made his exit in fourth place and pocketed $232,271 for his performance.

Over the next three hours of play, the remaining players bounced all around the chip counts. In one hand, Rousso found herself on the short stack and moved all in for her last 1.95 million on the button with

. Esfandiari looked down at

in the big blind and made the call. Rousso was dominated and needed some major help. The

flop changed nothing and the

turn left her drawing thin. When the

appeared on the river, Rousso became the third-place finisher and took home $358,964.

Robl, who had 9.5 million, entered heads-up play with a slight chip lead against Esfandiari, who held 8.155 million. The two players, who both happened to be Victory Poker pros, were clearly excited and decided to celebrate by ordering shots. The atmosphere was jovial, but all fun and games must come to an end.

The pair battled back and forth, exchanging the chip lead several times, before the final hand developed. Esfandiari held a nearly 2-1 chip lead when he raised to 800,000 and Robl moved all in. Esfandiari called and flipped

, which was ahead of Robl’s

flop gave Esfandiari a pair of kings but also gave Robl straight and flush draws. The crowd was tense as the dealer burned and turned the

, bringing Robl one card closer to elimination. After nearly 11 hours of final table action, the last card of the tournament, the

, was put out on the river. Robl had missed his plethora of outs and became the runner-up, earning himself $549,003; meanwhile, Esfandiari celebrated his 32nd birthday by winning his second WPT title. After six days of grueling play, Esfandiari became the 2010 WPT Five Diamond World Poker Classic champion and took down the $870,124 first-place prize.

Here are the results from the 2010 WPT Five Diamond Poker Classic final table: