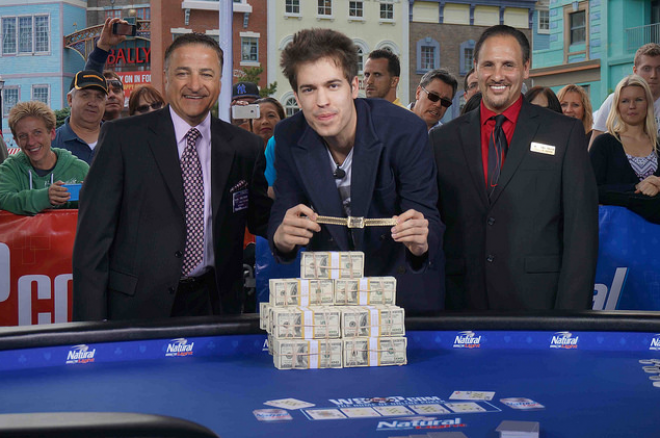 On Saturday, the 2014 World Series of Poker National Championship came to an end when the final six players of a 126-player field took to the legendary Atlantic City Boardwalk and played down to a winner. It took less than five hours of play for Dominik Nitsche to emerge victorious to capture the $352,800 first-place prize, the National Championship title, and his second gold bracelet.

According to WSOP.com, action resumed with 47 minute remaining in Level 20 (6,000/12,000/2,000), and it would take just nine hands for the first elimination to occur. It happened when at-large qualifier Andrew Robinson moved all in from the button for 105,000 and Athanasios Polychronopoulos called him from the big blind.

According to the PokerNews Odds Calculator, Robinson was behind but had a 43.21% chance of surviving the hand while Polychronopoulos would win 56.27% of the time. The

flop was no help to Robinson, and he watched his chances drop to 23.33% while Polychronopoulos’ jumped to 75.76%.

turn drove them further apart as Polychronopoulos became a massive 86.36% favorite and Robinson would only win with either a six or eight, something that would happen just 13.64% of the time. The

river put two pair on the board, which meant Polychronopoulos’ ace made all the difference. Robinson exited in sixth place and took home $65,734 for his efforts.

It would take another 50 hands for the next elimination to occur, and it happened when Tracy Doss, who won his way into the National Championship by winning the WSOP.com Nevada KO Freeroll, raised to 50,000 only to have Nitsche three-bet to 155,000 from the small blind. Doss four-bet all in for roughly 400,000, Nitsche called, and it was off to the races.

flop was disaster for Doss as it delivered Nitsche a set, and the

"I'd be lying to tell you I'm disappointed," said Doss, a pizza store owner. "It's been very humbling, exciting... It's a great, great opportunity and anybody can do it. You can come here, like me, and play against the best in the world."

On Hand #74 of the final table, Chris Bibb opened for 50,000 under the gun and was met by a three-bet to 120,000 from Nitsche in the small blind. Bibb responded by moving all in for 230,000 total and Nitsche wasted little time in calling with the

, which was well out in front of Bibb’s

flop gave Bibb the lead, but it was only temporary as the dealer burned and turned the

to give Nitsche a flush. The meaningless

was put out on the river for good measure, and the last WSOP Circuit qualifier was eliminated from the tournament in fourth place for $115,655.

That left three WSOP bracelet winners in contention for the title, though one of them would fall on Hand #82. It happened when Polychronopoulos opened for 70,000 on the button, Matthew Ashton three-bet all in from the small blind for 760,000, and Nitsche four-bet all in over the top from the big. Polychronopoulos folded and it was another flip.

Ashton, the 2013 WSOP $50,000 Poker Players’ Champion, was ahead, and he strengthened his position when he hit a set on the

flop. Nitsche was drawing to running cards, and the

turn was one of them as he picked up a flush draw. Much to Ashton’s dismay, the

spiked on the river to give Nitsche the said flush. Ashton, who began the final table as the chip leader, earned $157,399 for his third-place finish.

Nitsche began heads-up play with a more than 2-1 chip lead over Polychronopoulos, and it’d take 31 hands for him to seal the deal. In the final hand, Nitsche opened for 70,000 and then moved all in after Polychronopoulos three-bet to 190,000. Polychronopoulos called off and found himself in a prime spot to double.

Nitsche had gotten lucky with the runner-runner flush to eliminate Ashton, and he was lucky again when the flop came down

river changed a thing, and Polychronopoulos finished as the runner-up for $218,056 while Nitsche became the 2014 WSOP National Champion.

*Photos and data courtesy of WSOP.com.