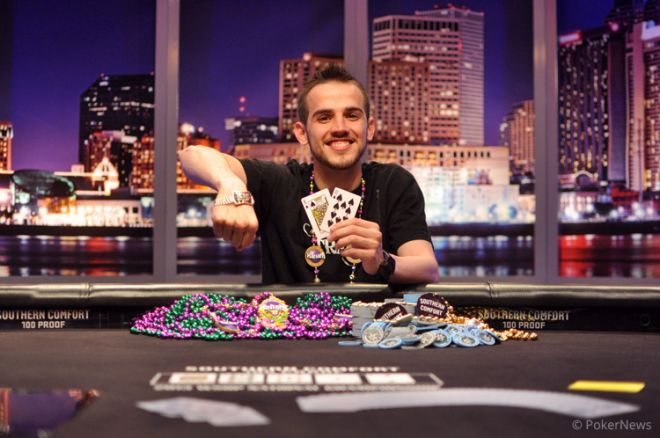 The first World Series of Poker bracelet awarded on U.S. soil outside of Las Vegas was bestowed upon Jonathan Hilton on Friday after he topped a 127-player field in the third annual WSOP National Championship. Hilton bested a tough final table to claim the top prize of $355,599 and his first WSOP gold bracelet.

The tournament, held at Harrah’s New Orleans, was comprised of 20 WSOP Circuit Main Event winners, 18 Casino Champions, 62 at-large qualifiers and 27 WSOP POY $10,000 buy-ins. It marked the culmination of the 2012-2013 World Series of Poker Circuit season, which awarded 240 gold rings all across North America since August 2012.

It took about an hour for the first elimination as the first few all-in situations resulted in doubles. Then, in Level 21 (8,000/16,000/2,000), Ausmus, the 2012 WSOP Main Event fifth-place finisher, raised to 33,000 in the cutoff and Panitch called on the button. After the blinds folded, the dealer fanned a

Ausmus, who was the one at risk, held an open-ended straight draw but needed some help to double in order to overcome Panitch’s big pocket pair. The

turn didn’t do it, and neither did the

river. Ausmus, who began the final table second in chips, was eliminated in eighth place for $38,570.

After Colombian Vaca-Rondon bowed out in seventh place, a huge hand took place in Level 22 (10,000/20,000/3,000) that shook up the chip stacks. It began when Hilton opened for 40,000 from under the gun and Panitch called in the cutoff. Tehan then three-bet all in for 319,000, and Steinberg called off for 248,000 from the small blind. Hilton folded and Panitch thought for about 45 seconds before calling to put both players at risk.

The crowd and almost all the players were on their feet in anticipation of the monster hand. Panitch's supporters were calling for an ace and to use his "one time" while Tehan watched the action with his hands on his head. After the dealer squared away the various pots, he burned and put out the flop—

Steinberg came from behind to flop a set and was a heavy favorite to triple up. Panitch's supporters then began calling for a king to give their man Broadway, but that was unlikely because Tehan held two of them. The

turn opened up some more options for Panitch to score the double elimination as a nine would also give him a straight, but the

river was no help to him. Steinberg's set held to give him a huge triple, while Tehan took down the side pot of 142,000. Little good it did him though as Tehan was eliminated in sixth place on the very next hand.

Bowman was eliminated in fifth place a short while later.

Parker’s bid at his third bracelet was cut short when Steinberg opened for 55,000 on the button and Parker, whose stack had dwindled, moved all in for 350,000 in the big blind. Steinberg tank-called and the cards were turned up.

Parker was behind, and Steinberg increased his lead when the dealer fanned

. Parker needed running cards to make a wheel, and the

was one of them. The two-time bracelet winner was left with three outs—the

was no good—to stay alive, but the

on the river was not what he needed. Parker exited in fourth place for $114,008.

After 62-year-old Panitch, from Northbrook, Illinois, fell in third place after the dinner break, Steinberg took 2.195 million into heads-up play against Hilton’s 1.615 million.

It was a back-and-forth affair, but, thanks to a double, Hilton was able to take the chip lead.

on the turn. Steinberg paused for a moment before announcing that he was all-in and Hilton snap-called.

Hilton got it in good with two pair, but Steinberg held an open-ended straight draw. The railbirds were very vocal for their respective man as everyone seemed to know this would be the determining hand. Either Hilton would clinch victory or he would be crippled. The dealer burned one last time and put out the

, the last card of the 2013 National Championship. Steinberg was gracious in defeat and shook Hilton's hand before exiting in second place, good for $219,799.

That does it for our coverage from the National Championship at Harrah’s New Orleans, but the PokerNews Live Reporting Team will be back in less than a week to cover all of the 62 events from the 2013 World Series of Poker in Las Vegas, Nevada.