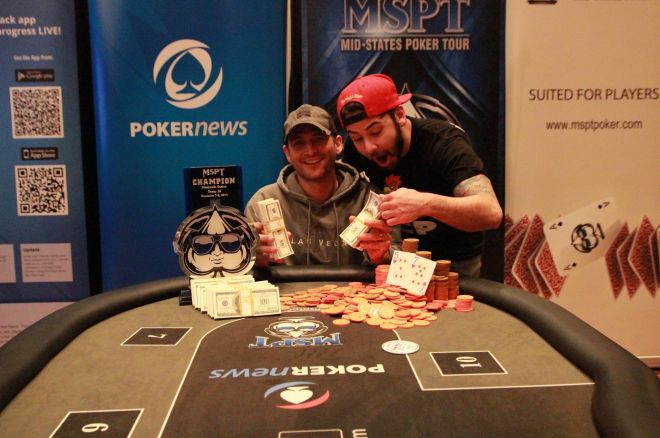 Nick Jivkov claimed victory over an Iowa state record 426-player field to bank $104,974 at Mid-States Poker Tour Meskwaki Casino. The win counts as the second-biggest score of Jivkov's live career after his 2012 World Series of Poker bracelet win in Event #5: $1,500 Pot-Limit Hold'em. The Des Plaines, IL, native exorcised an old demon, as he finished runner-up to Terry Ring at Meskwaki back in 2013.

Mike Lang, his heads-up opponent, was not so fortunate, having to leave himself with his second runner-up finish of the tour season after narrowly missing a title at Canterbury Park back in April. Lang scored more than $60,000 in prize money.

Both players began Day 2 among the top 20 stacks, but it was Lang who quickly asserted himself and grabbed a commanding chip lead when he took a monster pot on a

flop. An opponent shoved all in with the

, only to be shown the

Lang continued to increase his chip lead over the field as notables such as Rodger Johnson, James Mackey, former MSPT Meskwaki champ Jonathan Olson, European Poker Tour winner Tim Vance, "Minneapolis" Jim Meehan, and Joe Illingworth fell before the money. When Jeremy Dresch got lucky and hit a flush to burst the bubble, the remaining players found themselves in the money.

Once there, Nick Pupillo was an early victim of bad luck as Lang put a bad beat on him. Others following Pupillo to the payout desk included Nik Stone, Todd Breyfogle, Yossi Azulay, Jeff Bryan, and Ralph Massey.

Lang, meanwhile, pushed the issue with overcards one time too many and dumped his chip lead when he jammed a ten-high flop with

only to be snapped off by Andy Van Blair's

. Soon thereafter, Phil Mader got the last of his chips in with the

and was run down by the

of John Reading, and the final table was set with Ken Rosheisen toting a chip lead and Jivkov narrowly trailing in second. Lang was in the danger zone with just 11 big blinds, and the average stack at this point was still relatively small, around 20 big blinds.

by hitting a boat with the

Jivkov, meanwhile, rocketed to the top of the counts when Brandon Smith shoved all in from early position for 275,000 and was called by Jivkov in the hijack. Van Blair then shoved for about 450,000 in the blinds, and Jivkov called.

No more jacks remained in the deck, but the worst hand quickly became by far the best as the flop brought

turn meant the hand was done, and a

finished the board out, eliminating Van Blair in ninth and Smith in 10th.

A miniscule-stacked Noe was next to go in eighth, sparking a flurry of eliminations as he was quickly followed by Day 1a leader David Gutfreund in seventh and Dresch in sixth.

and discovered he'd been shoved on light by an inferior

. No help materialized for Reading.

Lang then turned to ladies to leap up the counts, first shoving over a button open from Rosheisen, who held the

, and then three-betting another button open from Darren Ficek, who had the second-best position of holding

. He also failed to catch against the queens, ending his tournament in fourth.

Three-handed play lasted 15 minutes, and that's when Jivkov finally made a misstep. He completed the blind, and Rosheisen made it 260,000 to go. Jivkov announced he was all in, and Rosheisen quickly called off his stack of about 2 million.

Jivkov muttered that a miracle was needed, but he didn't have to wait long as the

turned, and Jivkov's rail called for a queen. Instead, it was the

on the river — just as good — and Rosheisen could only shake his head in disappointment.

Heads-up play progressed slowly for a while as each player held small leads, but neither could take real command. The two combatants seemed content to tread water, mostly trading blinds, until a limped pot proved to be the decider. Jivkov checked from the big blind on a

for a flush, which was well ahead of Lang's

. When Lang failed to improve, he was left crippled, and Jivkov finished him the next hand.

The MSPT will be back in action on Thursday with another main event in Black Hawk, CO, which PokerNews will be covering in our live blog. We’ll also be providing daily recaps from that tournament.