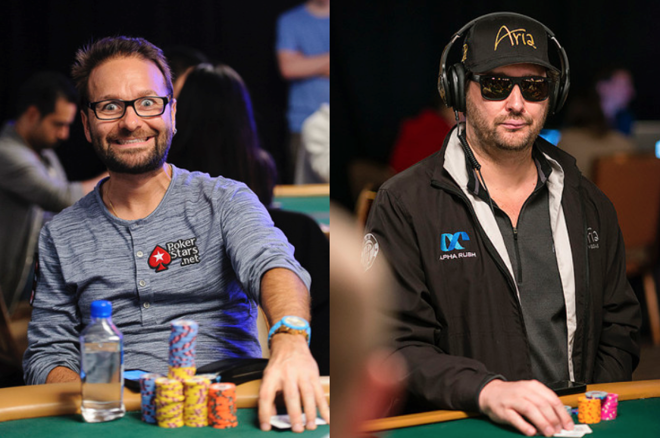 From The Odd Couple to Seinfeld, poker is a pop culture staple.

And like Jerry or Felix and Oscar, many players once chased that wild 4, Joker, or Suicide King to complete a hand. Wild card games are played far from the casino floor and they are a big part of poker history and lore.

From kitchen tables with friends and family to smoky back rooms and bars, the popularity of these games helped make poker a household name and game. Even top name pros like Phil Hellmuth grew up playing wild card games and looks back fondly on those times. Here are a few of those favorites.

The "Poker Brat" may have $21 million in tournament winnings and 14 WSOP bracelets, but Phil Hellmuth once was a wild card player as well. He grew up playing a game called Black Mariah, a version of Seven-Card Stud, in which the high spade in the hole wins half the pot.

To add even more fuel to the game, deuces, One-Eyed Jacks, and Suicide Kings are all wild. The game was popular among Hellmuth and his friends in Wisconsin.

“A famous line amongst my neighborhood friends from that game in 1979 was this, ‘Quarters go in pockets,’” he said. “Because the ‘big chip’ in the game was a quarter.”

"Kid Poker" often played a game called Vanunu, a form of Seven-Card Stud Hi/Lo with no qualifier that he and his Toronto friends invented. All cards are dealt face down and each player rolls his own (chooses which one to turn face up). Players roll and bet until there are five up cards and two down cards.

Each player can then pitch a card back in the muck and a buy another after the last card is dealt face up: $5 for an up card and $10 for a down card.

An added twist is that each player then has to declare low, high or both by dropping coins in the center of the table simultaneously – one for low, two for high or three for both. If a player declared both, he must win both or get no part of the pot. If there were only multiple low declarations, the best low hand would scoop the pot. If there were a couple low declarations and only one high, the high player would take half no matter what.

Negreanu says the game is crazy, complicated, but lots of fun. The challenge involves determining various low options and even deciding to go high with a somewhat low hand based on opponents’ cards. The game involves plenty of card reading and decision making.

Darren Elias, a three-time WPT champion, often played a game called Scat with family when he was younger. Everyone is dealt three cards and has to try to get 31 or as close to it as possible. Face cards count as 10 and aces are 11.

Players are allowed to discard one card at a time and either pick up the discard of an opponent or hit the deck for a random card. A player confident in his hand can knock the table to indicate each player has only one more turn before showdown.

“I believe the top half of hands won and bottom half of players lost,” Elias said. “We used a three-life system using quarters, so you paid a quarter to the middle if you lost a hand. Once you lost all your quarters, you were allowed to play until you lost one more time ‘on your honor’ then you were out for good. I remember quite a few crazy comebacks from being on my honor.”

While not exactly a poker game, Xuan Liu remembers her favorite casual card game was Crazy Eight Countdown. The game is basically like Uno, but players first start by getting rid of eight cards in their hand then go down to seven, six, etc., until they finish the round with one card left.

“The part that made it the most fun was the variance in the game regarding the ability to compound picking up two cards as well as the special rule that forced players to announce when they had only one card or a pair left to play,” she said. “If you caught a player not saying this immediately, you can force them to pick up additional cards.”

Dutch Boyd’s favorite wild card game is Lamebrain Pete, which he used to play on a now-defunct website. It is a variation of a flop game called Cincinnati.

Each player is dealt five hole cards, of which players can use as many as they want. The flop comes out one card at a time with a betting round preflop and between each street. An added twist to an already card-heavy game? The lowest card on the board is the wild card.

“The great thing about the game was that you'd sometimes end up with three wild cards to make your five card hand,” he said. “And people would inevitably think that their royal flush was unbeatable. But five of a kind would actually beat the royal flush. It was a total hustler game, just waiting for the guy who has the royal to shove his stack in, and then snap him off with your five Kings. It was awesome. I've never heard so much salt at the tables.”

Tom Schneider, a four-time WSOP bracelet winner, played a game called Buck growing up, which was similar to Three-Card Guts, in which players receive three cards and can decide to play their hand or not by simultaneously dropping a chip in the center of the table. If there were multiple players, the losers match the pot.

However, the Schneider version had three non-player hands a player had to beat if one only one stayed in the hand.

“If two of you stayed in, you played against each other for the amount of the pot,” Schneider said. “If only one player opened his hand up with a chip in it, then he played against the three house hands and had to match the pot if he couldn’t beat all three. It made for some big pots that were way too big for a bunch of high school kids.”

The author of some of poker’s most-loved literary works, including Positively Fifth Street and Cowboys Full: the Story of Poker, grew up playing penny-ante games in the Bronx and moved on to bigger games as he got older.

Many of those players are featured as characters in James McManus' newest work The Education of a Poker Player (published in 2015). In the chapter “Kings Up,” he describes a game played among some of his characters called Share Four. The book offers coming-of-age tales centered around the characters’ regular poker games. While Share Four doesn’t feature wild cards, it offers some unique insight into why Texas Hold’em became so popular: speed of play and shared community cards.

“[Figueroa had] once again chosen this new form of stud called Share Four, in which nobody got their own board cards,” McManus wrote. “Instead, you turned over four ‘community’ cards, each one for streets three through six; seventh was still your third hole card, still dealt down and dirty. He and Vogel both liked it because they said it played faster: fewer cards to deal, more hands per hour, so the best players could win the most money.”

Wild cards were not only included in the games occasionally, they apparently stoked some frequent disagreement.

"There were regular debates about whether to have wild cards, with me being among those who loathed them," McManus told PokerNews. "Since most games were dealer's choice, we probably had wild cards 25 to 50 percent of the time, with the number going down the older and more serious we got about poker."

Like many, Brandon Wittmeyer started playing poker as a youngster by getting dealt into wild card games. Poker was a regular game for his family, but never played Texas hold’em until it became popular in the early 2000s. While in high school, Wittmeyer’s father would take him to games with his friends.

“At these games all they played was high-low and wild card games,” he said. “It was interesting to see some of the weaker players always get stuck with a marginal low or weak wild card hand and just get taken for bets on each street until the end. If you know you’re locked in for a high hand or something you can just keep pounding it. That was always a good feeling knowing you'd get half the pot. You have to have a good sense and some experience though.”

One of Wittmeyer’s fondest memories was when he was young. His father, friends and family would play a game called In Between the Sheets. In the game, players ante and are dealt one card up on the left side and one card up on the right side. The player has a choice of deciding to make any wager up to the size of the pot. If a player wins, he takes the money out of pot.

“If you lose you put more money into the pot,” he said. “You can also pass onto the next person. The game is about betting the right amount to win the money in the middle. For example, let's say the card on the left is a king and that card on the right is a four. Now that's a decent chance for you to win something.”

The player bets any amount in the pot if the player thought the card about to be turned up would be in between the other cards. If the next card matches one of the other two, the bettor/player pays double the bet size.

“Let's just say the pots can become enormous and it's quite fun and entertaining to see it grow” Wittmeyer said.

In the Side Pot – Losing the Car
Wittmeyer remembers a unique hand from 25 years ago when his aunt MaryAnn, father, and friends were playing In Between the Sheets. They had been playing for some time late into the morning and his aunt was losing a bit.

“My aunt liked to drink just a little bit to say the least,” said Wittmeyer, who was 7 years old at the time. “She gets dealt an ace-low and ace-high, which is the best possible hand. You only lose if one of the other two aces comes, and the one of the last two aces was just turned up on the previous hand dealt.”

There was a few thousand bucks in the pot, which was a lot for this game. His aunt didn't have that type of money with her, so she thought she might as well wager her car (worth $8,000 at the time).

“So in her crazy head, it made sense,” Wittmeyer said. “So she decides to throw her keys in the pot and bet it. Sure enough though, that last ace in the deck dealt in the middle. The one-outer hits! She loses her car and turns as white as a ghost. My poor little aunt. She went right into the other room and went to bed devastated.”

There is a silver lining to the story. Wittmeyer’s father stayed up all morning trying to win the car back and he eventually did – luckily for aunt MaryAnn.

A home game laugh from Walter Matthau in The Odd Couple

Do you have a crazy wild card game? Leave a comment below with a description of how the game is played.

Behind the Scenes with Poker Masseuse Dana Perianu