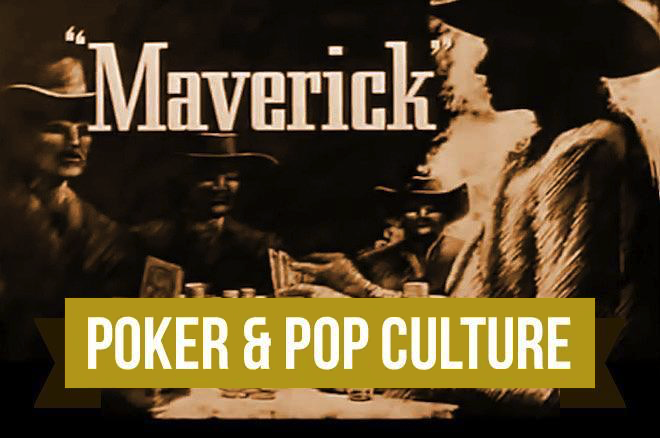 "Who is the tall dark stranger there?
Maverick is his name.
Riding the trail to who knows where?
Luck is his companion. Gambling is his game."

So went the memorable theme song to Maverick, the popular television series from the late 1950s and early 1960s starring James Garner as Bret Maverick, a rambling, gambling cowboy traveling through the Old West in search of action and adventure.

Maverick was one of very few long-running TV series — and likely the most popular — to feature a poker-playing character in the lead role. As such the show, along with subsequent iterations of the Maverick character and story, would exert some influence on poker's place in American culture, introducing the game to many via its engaging mix of witty humor and western-themed morality tales.

A Mini-Boom in Poker

Maverick debuted on ABC on Sunday, September 22, 1957 and was an immediate hit, successfully luring viewers away from other popular Sunday night shows like The Ed Sullivan Show on CBS and The Steve Allen Show on NBC.

The show was created by Roy Huggins. After writing a few novels, then working as a screenwriter and director, Huggins had become a television producer for Warner Brothers a couple of years before. Following Maverick, Huggins would go on to have a hand in several successful series, including The Fugitive, The Rockford Files (also starring Garner) and Baretta.

The very first episode, titled "War of the Silver Kings," had a plot that revolved around a poker game. Soon after arriving in the town of Echo Springs, Maverick finds himself playing poker with a silver baron named Phineas King. He wins the game, successfully bluffing King out of a big pot.

"You're a very smart poker player," says King to Maverick. "Lookin' right down my throat, weren't you?" "I could almost see what you had for lunch, Mr. King," quips Maverick.

King then attempts to run Maverick out of town, eventually scheming to have him killed, although Maverick manages to escape unscathed.

The third episode, "According to Hoyle," has Maverick playing poker on a riverboat. In the seventh, "Relic of Fort Tejon," Maverick actually wins a camel in a poker game.

During a time when westerns were especially popular both on television and in the theater, Maverick actually played as a kind of spoof of the genre, poking fun at Gunsmoke and other "straight" westerns with a humorous hero who was decidedly unlike the standard rough-hewn model of masculinity typically featured.

An article in the January 19, 1959 issue of LIFE magazine about the show points out how at the time it was one of 32 different TV westerns. But it definitely stood out thanks to its unorthodox approach, as indicated by the title of the article asking with mock incredulity, "This Is a Television Cowboy?"

"It's 'hero' is a lazy, sneaky, poker-playing vagrant, the black sheep of the cattle country," we're told. "On any other western he would be taken for the heavy, or least for a personification of human frailty."

The article notes how the character dislikes gunplay, doesn't drink, prefers to run from conflict than to face it, and isn't even that intelligent — usually being more lucky than good — all evidence to support the idea that "as western heroes go, Maverick is singularly unheroic."

The article includes a list created by Huggins to help those making episodes understand the character and the program's ethos, titled "A Ten-Point Guide to Happiness While Writing or Directing a Maverick." The list highlights Maverick's main motivation — profit — but also clarifies his status as a gambler.

"The widely held belief that Maverick is a gambler is a fallacy," Huggins explains. "In his hands poker is not a game of chance. He plays it earnestly, patiently and with an abiding faith in the laws of probability."

In other words, while Maverick is somewhat of a bumbler when it comes to other expectations of Old West heroes, at the poker table he was as earnest as he could be.

While poker wasn't always the focus of the episodes' plots, it was nevertheless a constant subtext, with Maverick's identity as an archetypal Old West gambler (albeit with a relatively modern sense of humor) presenting poker in a more favorable light than in other representations. In his novel Texas Poker Wisdom, Johnny Hughes notes of Maverick that the "TV series spawned a mini-boom in poker much like Rounders created a real boom in poker in the 1990s."

Poker According to Maverick

Helping spur that "mini-boom" were various product tie-ins with the television show, including a run of comic books featuring issues adapting episodes' plots. Illustrated by Dan Spiegle, the comics featured photographs from the show on the covers and was one of the Dell Publishing Company's more popular items.

In 1959, Dell issued another series tie-in, a soft-bound volume with the title Poker According to Maverick. A brief (159-page) work ostensibly "authored" by Bret Maverick himself, the book's subtitle explained its contents to all: "TV's Most Exciting Character Reveals the Secrets of the World's Most Exciting Game." The photo on the cover featured Garner and Kelly in character, sitting behind piles of chips and playing a hand.

The book is a poker strategy guide, no doubt authored by Huggins, the show's creator.

The chapters within cover a variety of topics. There's a chapter offering a short history of poker. There's another focusing on poker etiquette. There are also essay-like chapters with titles such as "Is Poker a Game of Luck?" and "Poker Psychology — Or 'Civilized Bushwhacking'." And there are chapters that introduce readers to rules and strategies for a variety of different poker games.

Though certainly rudimentary when compared to today's sophisticated, textbook-like tomes of poker strategy and theory, Poker According to Maverick actually contains a number of useful tips and guidelines, punctuated occasionally by colorful anecdotes (not unlike the stories told in the TV show) about various characters known to the "author" Bret Maverick.

Probably the most entertaining chapter is the one listing Maverick's "Ten Commandments for Poker Players." Some of these commandments — e.g., "If you don't have a fighting hand, drop it and wait for another," "Never draw to an inside straight," "Don't play... if you can't afford to lose" — remain worthwhile advice today. Others, particularly the seventh commandment, "Don't play poker with women," are perhaps best regarded as belonging more to the tenor of the Old West (or the 1950s).

In any event, many poker players old enough to remember the TV series also have memories of this book, and for a significant percentage of those Poker According to Maverick was the first and perhaps even only poker book they had read.

There were other books available, of course, including Herbert O. Yardley's classic The Education of a Poker Player (1957), which also get frequently mentioned as a first poker book ever read by many of that era.

Even so, thanks largely to the series' prominence, Poker According to Maverick would wield a not-so-insignficant influence, perhaps reflected by Amarillo Slim Preston's choice of title for his first book, published on the heels of his 1972 WSOP Main Event triumph — Maverick Poker.

A Legend of the West

A new version of the book, retitled Maverick's Guide to Poker, was later published to coincide with the 1994 film starring Mel Gibson as Bret Maverick, and co-starring Jodie Foster, Graham Greene, James Coburn and Garner as well as the Marshal Zane Cooper. (The newer edition sneaks in a chapter on hold'em.)

Garner had been involved in some other Maverick revivals after the original series went off the air in 1962, including a couple of ill-fated TV series in the late '70s and early '80s. The film adaptation, however, directed by Richard Donner, was both a critical and commercial success, full of entertaining (if improbable) poker scenes as well as an anachronistic tournament played on a riverboat.

Like all of the other versions of Maverick, the film is very light-hearted in its approach, aiming as much for laughs as for thrills, with Gibson's Maverick again (mostly) more comedian than cowboy. Such is the attitude reflected in Poker According to Maverick, in which Maverick speaks of poker being "a way of harmlessly expressing man's most deep-rooted anti-social drives."

Of course, the version of poker and the Old West represented by Bret Maverick — like versions presented in non-parodic western shows and films — never quite existed in real life. The theme song does, after all, conclude with the line "Maverick is a legend of the West."

Even so, along with many other representations, the show did help bring poker out of the 19th century and into 20th century popular culture, thereby contributing in real ways to the game's development and history.

From the forthcoming "Poker & Pop Culture: Telling the Story of America's Favorite Card Game." Martin Harris teaches a course in "Poker in American Film and Culture" in the American Studies program at UNC-Charlotte.

Poker & Pop Culture: Disorder in the Cards in American Westerns