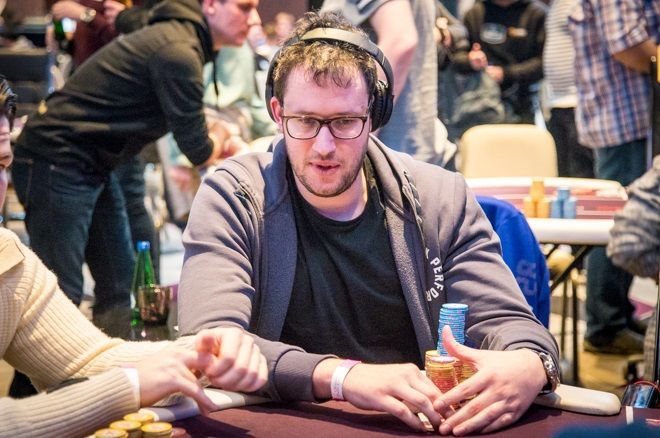 The €550 MPN Poker Tour Tallinn Main Event is heading into its final day with the field trimmed down to 18 contenders vying for the first MPNPT trophy of the year and the €51,000 top prize.

United Kingdom's Luke Martin leads the with a massive chip lead of 2,900,000 in chips, representing almost a million chips more than the second highest-stacker, Paf qualifier Peter Pihlstrom with 1,927,000 in chips.

Half of the field on the final day won their original package or seat online with Guts patches adorning the most sleeves including Virginijus Lapenas (1,300,000), Eirik Presterud (702,000), and Jorn Inge Hval (658,000).

The field size ballooned to 562 entrants after the last of the super-late registrants had taken their seats on Day 2. The field size smashed MPNPT's previous record in Tallinn set in 2017 of 534 entrants and easily surpassed the €200,000 guarantee with a final €272,570 prize pool.

On Day 2, Mika Paasonen finished on the bubble in 72nd place, missing out on a portion of the Main Event’s prize money but was consoled with a double prize after being gifted a free €550 MPNPT Prague 2019 seat plus a bubble prize from OlyBet with whom he qualified online worth €1,100.

MPNPT stalwart Jari Hurri busted in 21st place for €1,600, marking his eleventh cash on the tour since 2015. Also going deep on Day 2 but not surviving the final day was experience Irish live and online poker player Daragh Davey (19th place - €1,600).

For all payouts so far, and chip counts for the last two tables, visit the MPN Poker Tour Blog’s Day 2 wrap with coverage continuing Sunday from 2 p.m. EET. The live stream will be broadcasted starting at 2:20 p.m. EET on a 20-minute delay and hole cards exposed until a winner is crowned at twitch.tv/thrillofpoker.

Sunday is a day of multiple finals, with Day 2 of the €1,300 High Roller and the €220 Hendon Mob Championship also taking place alongside the Main Event. The six-handed High Roller restarts at 2:30 p.m. EET and will award its winner just under €13,500.

Wrapping up the tournament action for this stop are the €220 MPNPT Omaha Cup at 3 p.m. EET and the €110 NL Hold’em Turbo Freezeout at 6 p.m. For those for whose trophy dreams come to an end, the Fish Party live sit-and-go tournaments continue with MPNPT branded merchandise and prizes including a €110 UCOP Main Event online ticket and a €1,500 MPNPT Prague package on offer.