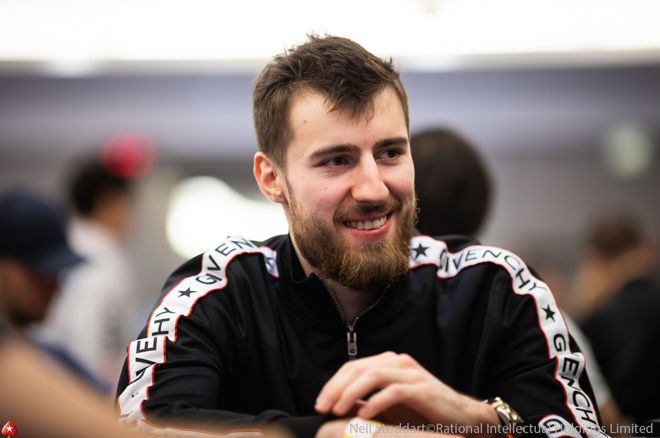 It's not just a screen name. Wiktor Malinowski embodies his online moniker "limitless", having rocketed up the stakes from online freerolls to playing in €25K to €100K high rollers at the PokerStars and Monte-Carlo®Casino European Poker Tour in just five years.

"It was a hell of a journey," reflects Malinowski. "I still can't believe it's happened so quick. It's been very nice."

Bad Beat for the Best

Formerly a professional handball player for the national team in Poland, the towering 24-year-old is no stranger to knowing what it takes to excel in a challenging game — something that has proven critical to his rapid rise in poker.

"I just work really hard," he explains. "I played freerolls, then I played some cash games. Until NL€100 was quite easy, but then I got some coaching."

He got his start in 2014 and it took him all of two years to go from playing freerolls and €.01/€.02 cash games to becoming a regular — and a winner — at some of the highest stakes online.

Known primarily as a cash game player, Malinowski has had his share of success in online tournaments as well, notably winning the World Championship of Online Poker $25K High Roller Turbo in 2018 that drew top poker talent from around the world.

"It was a hell of a journey. I still can't believe it's happened so quick."

In that one, Malinowski won $726K after coming out on top of a star-packed field of 141 entries, outlasting Justin Bonomo, Linus "LLinusLLove" Loeliger, Sergio "zcedrik" Aido, Andras "probirs" Nemeth, David Peters and other greats on his way to victory.

Malinowski's meteoric rise is no fluke. The Polish poker pro has put in the work to climb up the stakes faster than most could ever imagine, and it all started with a bad beat. As a professional athlete at the cusp of a promising career, one's worst fear is physical injury, and Malinowski was unable to avoid it.

"So basically I was doing sports from a young age, and then I got a knee injury, and I had all the free time. I was like 18 and I started playing poker just as a hobby," he recounts.

Once he returned from the injury, Malinowski had made some money in both poker and handball, and he was at a crossroads.

"I knew I needed to make a choice what to do and I picked to play poker because it gives you the freedom and you don't need to deal with injuries," he says. "It's same as a sport, because I love the games, but [poker] is more of a mind game, so I love it a lot."

Looking back, Malinowski is happy about his decision, and sees the dreaded injury as a sort of blessing as it led him to poker. As it turned out, his experience as an athlete in training had prepared him well for poker, not only for the hard work and dedication it would require, but also for the mental fortitude needed to be successful at the highest stakes.

"When from childhood, you work for something very hard, and your biggest fear comes up... that actually helped me prepare for poker because it's a very mental-testing job," says Malinowksi. "So because of that, I think as a player, I was able to improve a lot."

Article continues under this promo

While he started playing more live in 2016 he stuck mainly to cash games. Only recently did Malinowski begin hopping into live high roller tournaments. Besides participating in a couple of the bigger buy-in events at a recent Triton High Super Roller Series, including a HKD 1 million event (~$127,465), Malinowski is fresh to the live high roller scene.

His brief window of flying under the radar in these events is likely coming to a close, however, especially since many of his tablemates have actually played with him before online.

In the €100K event here at EPT Monte Carlo, Malinowski made the final table and played alongside Sam and Luc Greenwood, Charlie Carrel, Mikita Badziakouski, Daniel Dvoress and eventual winner Sergio Aido. In fact, Aido was at the final table of the WCOOP high roller won by Malinowski.

"I feel like I belong here and to be honest, in comparing the level of online to live poker, I feel like live poker is easier."

"I think now they know me," he laughs. "Yeah, at the beginning, they thought maybe I'm some like VIP or something, but now I think they know who I am."

His seventh-place finish in the event earned him a payday €264,860, the equivalent of a almost $300K USD, and it was his second cash on Hendon Mob. With so much success online, Malinowski is only at the beginning of a budding live tournament poker career, and Monaco was an attractive stop for him to include in his schedule.

"I just decided to play," he says. "I had good results online and Monaco is such a nice place, and I make a little holiday mixed with poker, so I decided to jump in."

While some online players may need time to adjust to live play, Malinowski has had no trouble making the switch.

"The transition has been quite easy. I feel very comfortable because it's nothing new to me to be honest."

Indeed, playing a high volume at the highest stakes online for three years seems to have prepared Malinowski for what he's encountering in the live high rollers.

"I feel like I belong here and to be honest, in comparing the level of online to live poker, I feel like live poker is easier."

From what it sounds like, Malinowski is here to stay on the live high roller circuit as he shifts his focus from cash games to tournaments.

"In tournaments, there's a lot of different situations."

"I love tournaments a lot because there's more excitement. In cash, you know what to expect; in tournaments, there's a lot of different situations."

Having never been to the World Series of Poker in Las Vegas, Malinowski gives it a 50-50 chance that he'll be out this summer, in part to support his friends who play the mixed games there.

"You'll see me at some tournaments for sure — the bigger ones," he says.

Don't be surprised to see Malinowski succeeding at whatever he tries. As his screen name suggests, there seems no limit to what he can achieve once he sets his sights on doing so.

You can track Malinowski's progress in the EPT Monte Carlo high rollers and in the €5,300 Main Event at the PokerNews live updates page.

Discover How Many Free Spins You Get at Energy Casino

When to Double Down in Blackjack?