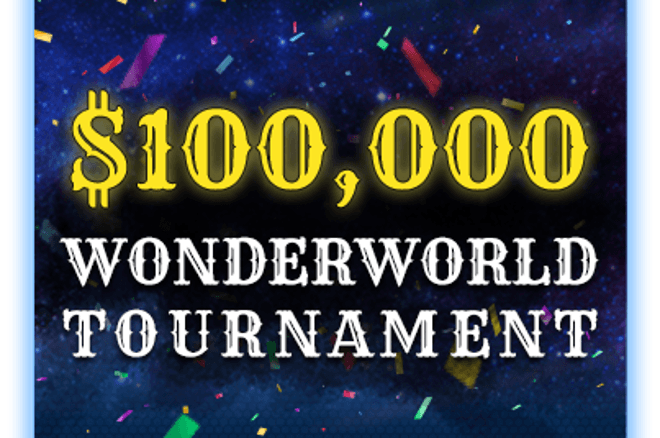 There isn't much you can do for $1 these days.

Maybe you can buy a candy bar or a bottle of water but not much else.

This isn't the case at 888poker where there are plenty of games you can play for $1 and in some cases even less.

Not only do you have a chance at a big payday but 888poker recently announced that Day 2 of this event will be live-streamed on both the 888poker Facebook and YouTube with 888poker commentators David Tuchman and Nick Wealthall hosting the action.

This means you have a chance to shine like the stars like you would if you made the feature table or final table of a big 888Live event.

What is the Wonderworld

As we already mentioned 888poker will live stream its historic $1 buy-in $100,000 guaranteed Wonderworld starting on Day 2.

This will easily make it the biggest tournament in terms of entrants that has ever been hosted at 888poker's long history.

The tournament features many opening flights each day featuring a dozen 10-minute blind levels. The action could end sooner if the field is trimmed down to 11 percent before the timer hits zero on Level 12.

Surviving Day 1 players will meet up again with other survivors for Day 2 on Sunday, June 29 at 6:15 p.m. GMT.

Another unique aspect of this tournament is that a min-cash will be $10 or 10-times that of the $1 buy-in. This makes it even more important to simply cash and you should consider playing tighter than normal if you are near the bubble.

Head to our Tournament Spotlight article for more information about this historic event.

Enter the WonderWorld for just $1!

Ever dream of being on a live stream but never thought it would happen because you aren't typically playing big buy-in live events?

Now is your chance to fulfill your dream.

We admit that you won't be under the lights and cameras that you would see at an 888Live poker festival but this is really the next best thing.

After all, it isn't every day that a $1 buy-in event garners this much attention including that of famous 888poker commentators David Tuchman and Nick Wealthall.

Even if you aren't playing, the event will be fun to watch as Tuchman and Wealthall have a unique chemistry developed over many years of commentating mostly at 888Live events.

The coverage begins at 7 p.m. GMT or 45 minutes into Day 2 and it will be a marathon with Tuchman and Weatherall entertaining the masses until the inaugural winner of the Wonderworld is crowned.

This is an event you can't miss whether playing or watching.

Download 888poker via PokerNews today to get started with an $88 bonus (£20 in the U.K.) without making a deposit.

Your first deposit will be matched up to $888 or more than double that most players get by creating their accounts directly from 888poker's website.