PokerNews Debate: Should Hendon Mob Be Including Online Results? 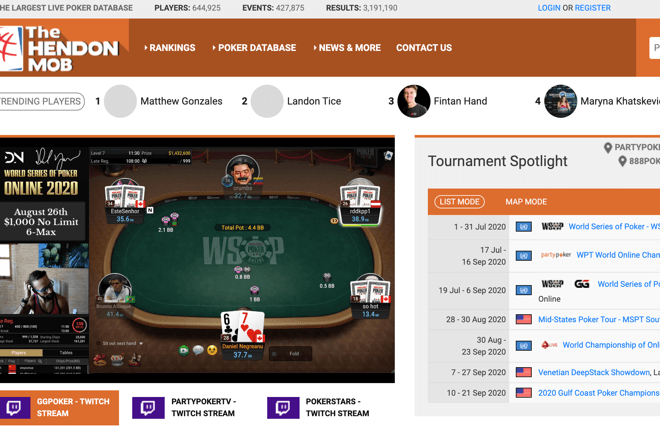 Earlier this month, The Hendon Mob announced that they would be adding the results from major online poker festivals, at least one that used real names, to their database. Though such results would not count towards money rankings nor GPI points. This was being done in conjunction with Pocket Fives, the industry leader in online results.

The decision came after a lot of players inquired whether or not their recent 2020 World Series of Poker and World Poker Tour (WPT) online results would appear on their profiles. Traditionally, Hendon Mob had only tracked live tournament results, so the initial answer was no.

The decision seemed to be well-received, though not everyone was a fan. In fact, two PokerNews staff members had differing opinions, so we thought we’d use it as a good opportunity to revive our “PokerNews Debate” series.

Since the dawn of online poker, there’s been a gulf between the online and live games. Beyond the obvious differences in location, reads, and play styles, one of the biggest chasms exists in the realm of results.

Earnings from online and live games, for most of the time online poker has existed, have been distinct aspects of a player’s career. The gap is so wide, there are two distinct streams for reporting and disseminating results. For the online world, Pocket Fives is the place to go to find out details on opponents, while for the live world, The Hendon Mob is the go-to place to get a summary on another player.

This has largely worked well, as the live and online games have a lot of differences that tend to make them unique enough that distinct streams for results have made a lot of sense. However, as the current pandemic situation brings live poker to a halt for the foreseeable future, there’s an open question in the poker world about how to report results in the new world.

"With most major live series moving to some form of online platform in 2020, it blurs the lines between the live and online worlds in a way that hasn’t happened before."

With most major live series moving to some form of online platform in 2020, it blurs the lines between the live and online worlds in a way that hasn’t happened before. The obvious result of live series moving online is that Hendon Mob has no live results to report on for 2020, and possibly longer.

While it’s certainly true that the new online versions of live events are significantly different from their previous live versions, they are also different from their online cousins. Especially with most of the live/online series using a real name policy, it makes a lot of sense to report them in the same way they would be reported any other year.

This is a big departure for Hendon Mob, which normally sticks to live results exclusively, but it makes sense in these modern times. Beyond the practical issues this year, adding a special category for online/live results allows Hendon to stay in the game during this pandemic, but it also allows them to keep reporting on the events and series they always have, despite the format changes this year.

Call me a traditionalist, but the tagline for HendonMob.com, which is listed right at the top of the front page, is “The Largest Live Poker Database.”

Given it’s a database for live events, why include online events?

The good news is that there is a database for online results, PocketFives.com. Also, players might not realize that it’s possible to have their “PocketFives Online Ranking” attached to their Hendon profile, so it becomes an easy one-click process to see their online highlights.

“PocketFives has a longstanding partnership with The Hendon Mob/GPI that allows players to link their accounts on the two sites,” PocketFives editor-in-chief Lance Bradley told me. “Doing so provides a link on your PocketFives profile to your THM profile (and vice versa) and lists the 10 most recent online cashes on your THM profile and PocketFives ranking information.”

"Right now, the results are posted on the same list of live results, so it just makes it more challenging when sifting through results."

He continued: “To do so, players need to login to their PocketFives account, in the upper right corner click on Profile, then click Edit Profile, and then paste the URL of their THM profile and click save. This will handle it for both sites.”

Given this option, I don’t think it’s necessary for Hendon to get into the realm of reporting online tournaments (though I am happy they’re working hand in hand with PocketFives when doing so). Right now, the results are posted on the same list of live results, so it just makes it more challenging when sifting through results. Granted, they do have the blue "international" flag next to them to make them easier to spot (maybe some sort of "online" flag would be better).

That said, I am in favor of them expanding their site to include online scores, perhaps in a new, segregated database. If something like that were established, it’d be cool to have a feature allowing fans to see a player’s live and online scores separately, or maybe if they clicked a button all of them merged together. That would be pretty cool, though I understand it'd be a big project and likely take a lot of time to implement. Still, I think it's worth doing.

Unfortunately, something like that doesn’t exist right now, and until it does, I think it’s best to keep online and live results separate. If you're going to do it, do it right. I'm not sure lumping them in with the live results is the way to go.

Now, to end on a positive note, though, I am happy to see The Hendon Mob establish a brand-new badge to designate online bracelet winners.

# We've added a special badge on the profiles of the WSOP Online Bracelet winners. # All Winners:… https://t.co/8DUpyxIiZH

Check out the new and improved OddsChecker US today!

A PokerNews Debate: Did William Kassouf Deserve A Penalty?