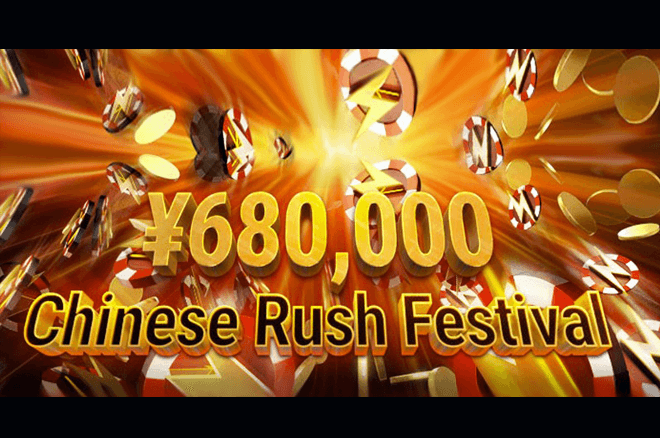 The Chinese Rush Festival has been running since Dec. 1 at Bestpoker and continues to do so until Dec. 31 when this ¥680,000 guaranteed promotion ends. This means you need to hurry if you want to be in with a chance of getting hold of some of the ¥680,000 on offer in time for the New Year.

What is Chinese Rush?

Chinese Rush is what Bestpoker calls it’s “fast-fold” poker variant. You are seated in a pool of other players instead of being stuck seated at the same table for the duration of your session. If you don’t like the hole cards you are dealt, you simply fold – you can do this out of turn! – and you are whisked away to another table with new opponents and new hole cards.

This special format allows you to play far more hands per hour, often up to a thousands per hour per table, compared to a standard cash game.

Bestpoker calls this Chinese Rush because all play on these tables uses the Chinese Yuan as the currency, displayed by the “¥” symbol. At time of writing, ¥1 was the equivalent of approximately US$0.15.

What is the Chinese Rush Festival?

The Chinese Rush Festival runs until Dec. 31 and you need to play as many hands of Chinese Rush as you can before the curtain comes down on the promotion. Leaderboard points are awarded based on the rake you generate at the Chinese Rush cash games and the top points earners at the end of the promotion win a cash prize of between ¥300 ($44) and ¥40,000 ($5,806).

It is possible to give your points tally a boost by playing on set days. Certain days, shown in the table below, award 1.5x the number of points while others multiply your points by 2x, 2.5x or even 3.0x, although you will need to play on New Year’s Eve to earn three-times as many points as usual.

What Can I Win in the Chinese Rush Festival?

Of course, it would not be fair if you are a low stakes player and are competing against those playing for high stakes, so Bestpoker has created two different leaderboards based on the stakes you play for.

Finishing in 300th place on the lower stakes leaderboard banks you ¥300 with the eventual winner securing a ¥15,000 payout.

Once you have created your new Bestpoker account, make a real money deposit and Bestpoker will match your initial deposit amount 100% up to a maximum of $2,000. You then release the bonus into your account at a rate of $1 per $10 contributed to the rake. Clear as much of the bonus as you can within 90-days of it being issued otherwise any unreleased bonus is forfeited.