Advice on What Not to Do: Learning from Miikka Anttonen’s Once a Gambler 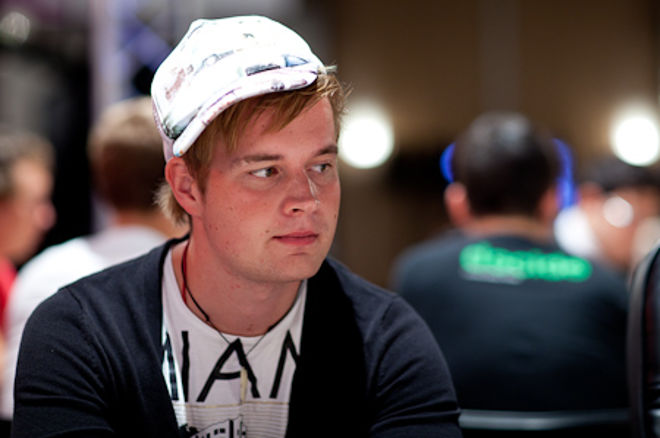 "During the rollercoaster of my poker career I've been broke more than a few times, been tossed around by turbulent relationships, lost control of a motorbike in monsoon rain, slept on a park bench, and gone from a sponsored professional to the spitting cup of the entire poker community. If I have a heart attack before I reach forty, I won't be particularly surprised."


~Miikka Anttonen, Once a Gambler

Miikka Anttonen discovered poker in 2007 while backpacking in Australia at age 20. Since then, the Finnish poker pro has amassed over $2.1 million in winnings, traveled the world, and built an online following as writer-gambler-degen "Chuck Bass."

PokerNews caught up with Anttonen to discuss Once a Gambler: The Escape, which is the first part of his three-part memoir. Topics include bankroll management, game selection, and adapting to current live and online MTTs.

PokerNews: How would you describe Once a Gambler?

Miikka Anttonen: The book is, in so many words, a chronicle of my journey in the poker world. It describes my highs and lows — from being so poor that I slept on park benches and inside abandoned houses to having six-figure paydays. But it's also a story about growing up, both physically and mentally.

I was just a dumb kid when everything started and I had no respect for money, especially when the boom was still going and the games were so easy. There's a segment in Part 2 where we are, literally, lighting notes on fire because there's not enough room in my friend's wallet. Fast forward a few years and I was struggling harder than ever before and needed to mature in order to get my life on track. So the book could be categorized as a coming-of-age story.

There's also quite a lot of poker content. I've had the pleasure of becoming acquainted with many interesting and exciting people over the years. In no particular order, the Hero of the story encounters Phil Ivey, Tom Dwan, Ziigmund (Ilari Sahamies), Paris Hilton, Timex (Mike McDonald), Vanessa Selbst, Antonio Esfandiari, and Johnny Lodden, and these encounters lead into some hilarious and memorable moments.

You've mentioned that Once a Gambleris a chronicle of your mistakes as an aspiring pro and thus has advice for up-and-coming grinders on what notto do. What specific mistakes are discussed in the book?

Anttonen: There are the obvious mistakes that often come along with being young and having too much money — especially bankroll management. There was a period when I played NL100-NL400 for a living, but lost all my winnings at $50/$100 or roulette every single month. In the late boom days, the games were so soft that one could easily make $20,000 a month, almost variance-free, just by showing up. But what did I do? I wasted my winnings on stupid stuff. I didn't respect the game or the stakes — all I cared about was playing higher and higher until there was no higher.

I wanted to be the best and I couldn't stand losing, but I didn't have a clear plan or a mature way of dealing with the swings. I wasn't interested in building my bankroll. It's funny how these days heads-up tables are full of bumhunters because, in 2008, all I did was reverse bum-hunt. If some guy limped his button or did something fishy, I sat out because I wanted to only take money from good players.

Then there were the really big mistakes. I don't want to spoil the book too much, but let's just say that, when things came crashing down, I did some extremely morally questionable things and messed up royally with not only my own, but other people's money.

In 2008, when you rose through the online ranks, online poker was very different than it is today. What recent changes have you made in your own game?

The fish-to-reg ratio has shifted dramatically, edges are much thinner, and online poker has become much more about consistency. Nowadays everyone has a HUD, all kinds of table selection tools, and hand-analyzing software. All that is, of course, bad for the game, and if it was up to me, I'd ban HUDs from all sites tomorrow. I think I'm one of the regs who benefits from HUDs the most — I have a very detailed MTT HUD that I've put a lot of effort into — but at the same time I'd give it up in a heartbeat.

When it comes to MTT trends, a few things have changed considerably. No one folds their BB anymore. So all of a sudden it's not as much about stealing blinds as it is about playing wide ranges correctly. It used to be that everyone played the top 15% of hands or whatever, but nowadays you get into spots every session where you're playing a 70% range on the button against a 60% defending range from the big blind. It's more fun but also a lot more difficult.

Another difference is blind-vs.-blind play. In 2011, at most stack depths, it was standard to raise or fold from the small blind, whereas nowadays many play a limp only strategy — especially when stacks are shallow. I personally like a mixed strategy between limps, raises, and folds in most spots, but that's mainly because I play a bit lower these days and it's not necessary to play close to GTO.

That's another thing on everyone's lips these days: playing "GTO" or Game Theory Optimal poker. I personally think that, in most MTTs, an exploitative style is still much more profitable. That said, games sure are getting tougher when $20 average buy-in players are discussing balancing ranges and so on.

You've also cashed for over $280,000 in live MTTs. What advice do you have for online pros transitioning to the live felt?

My main advice would be to just ditch GTO — ditch playing "perfect" poker — and try to exploit the shit out of your opponents. In a live tournament, you're only going to play with the same people for a few hours, and chances are you'll never see them again. Who cares if you're balanced? Observe every hand, take mental notes, look for weaknesses, and shamelessly attack your opponents.

Also think about your own table image. If you're a young kid playing lots of hands, no one's going to fold against you. Similarly, if you're a 50-year old woman, you can get away with so much bluffing it's insane. Live poker is a lot about stereotypes: you need to categorize people quickly and make rough estimates about who they are and what they're trying to do. But at the same time, everyone's doing the same thing about you, and it's your job to play differently from what your opponents would expect.

What can readers expect from Parts 2 and 3 of Once a Gambler?

One of my friends read the first forty pages of Part 1 and was like, "Dude, where's the poker?!?" and I said that, trust me, we're getting there. Parts 2 and 3 have a lot of poker content in the form of hands — most of them from $5,000-$10,000 buy-in live tournaments — and they offer some interesting strategy insights. Once a Gambler is obviously not a strategy book, but for an autobiography it has quite a lot of poker content mixed in.

Find out more about Once a Gambler: The Escape as well as how to obtain a copy by visiting the book's website.

Don't Be Half-Hearted With Your Semi-Bluffs