Explaining the "Straddle" (It's Not As Obscene As It Sounds) 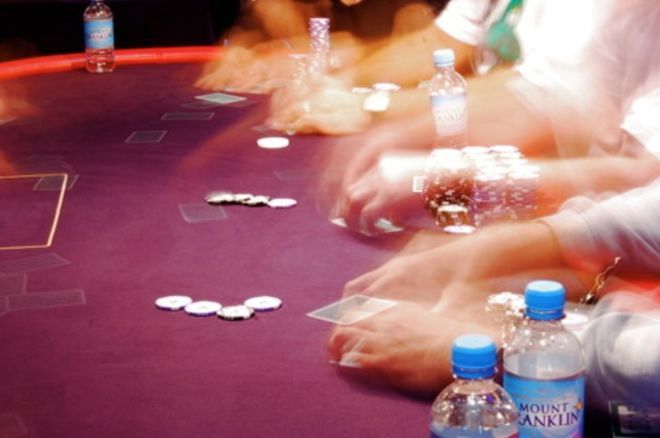 You're enjoying your first time in a real poker room.

You've played for several orbits of the button and are feeling like you're getting the hang of things.

Then, suddenly, when you're four seats left of the button, expecting to be second to act.

The player to your right puts out some chips even before picking up his cards, the dealer says, "Straddle," and points to you.

Apparently, everyone expects you to do something.

Your mind reels, wondering if your legs are long enough to straddle whatever it is the dealer expects you to straddle and whether it will look pornographic if you do it.

What the hell is going on here?

What do Players Think about the Straddle Bet?

What is a Straddle in Poker?

The "straddle bet" is one of the most confusing subjects to try to explain to new players.

The essential concept is that the straddle is an optional blind bet (i.e., one made before the cards are dealt).

But the number of variations on that basic idea is dauntingly large and bewildering to every new player.

The straddle is an optional blind bet.

You can hit five Vegas poker rooms in a day, and find that they all have different rules for straddles.

Let's start by describing the basic elements of what we might call the "classic" straddle in poker:

All of that is not too hard to deal with.

You just think of the straddle as an optional third blind, and everything makes perfect sense.

But poker players are never content to just leave well enough alone. They're always tinkering, coming up with new variations to keep from getting bored and to try to find a new strategic edge.

The most common variant is the "Button Straddle"

So we started seeing mutations of the basic elements listed above. And these can change the very nature of this bet and the poker straddle definition.

The Straddle Bet in No-Limit Games

In no-limit games, some people reasoned that the "no-limit" concept should apply to all bets, including the straddle.

As a result, you now sometimes see house rules that allow the straddle to be any amount, up to and including an all-in blind bet. Action-hungry players love this.

Other more conservative players think it ruins the game, turning a contest of skill into a crapshoot when the game has a few players who take advantage of this leeway.

If you ask me, I'm delighted to have a game in which we have players routinely putting in all their chips in the dark.

If you think about it, this way of using the straddle bet in poker is an enormous advantage in my favour — a far larger mathematical edge than I could get in most games.

Besides, action like that doesn't tend to go on for very long.

The players doing it either burn through all the money in their pocket, or they get lucky, accumulate a huge stack, and decide to either cash-out or start playing more cautiously.

There are different scenarios where you might be required to know how to deal with straddling and how to size your first bet.

Things got even more confusing when poker rooms started introducing variations on who can straddle.

Very rarely, you'll find a game in which a straddle is allowed from any position.

Another common variant these days is the "button straddle."

The game can't have more than one straddle. The button straddle, if in play, takes precedence over the under-the-gun straddle, and the dealer pushes the latter bet back to the player before passing out the cards.

Unfortunately, giving the straddle option to the player on the button wreaks havoc on the usual order of play, if the straddler is to have the last option to raise, as he does when the straddle is from the first position.

Casinos have devised several ways of handling this anomaly:

I'll save for another day a discussion of whether and when you might want to straddle for tactical advantage.

For now, if you're aware of the traditional procedure and the most commonly found modern variants on that classic, as explained above, you'll be in a position to avoid the confusion and frustration that new players otherwise tend to experience when first encountering the poker oddity called the straddle.

Usually, players will straddle from under the gun or the button, although on rare occasions they can be allowed to straddle from other positions (a.k.a., a "Mississippi straddle").

The straddle size is commonly twice the big blind — thus, if the game is $5/$10 no-limit hold'em, the straddle bet would be $20.

The straddle bet increases the stakes of the game you are playing.

There are a few things to consider when putting in a straddle bet in poker or when playing a "straddled" hand.

First of all, you must keep in mind that when a straddle or third blind bet is played, that will increase the stakes of the game you are currently playing.

That changes if someone decides to throw the straddle bet into the mix.

If someone puts in a $4 straddle (2x the big blind), suddenly the SPR drops to 28.57. This change means you'll have to adjust your preflop ranges and strategy.

Another argument in favour of straddling is that doing so usually loosens up the game. This creates what could be a better dynamic for you with more action.

This is especially true if you can influence other players to do the same and straddle as well.

You shouldn't feel bad or hesitate at all to refuse to straddle if this is your wish.

When an entire table is straddling (or even most of the players), some don't even realize they are actually playing a bigger game than they should be.

A situation like this one can lead to those players experiencing more pressure and thus play less well.

The straddle bet can even cause them to tilt and make more mistakes.

Even if you believe there are good reasons to straddle, keep in mind that straddling from Under the Gun (as opposed to straddling from the button or other positions) can mean putting in more money and potentially playing bigger pots from out of position.

Most players — even the most profitable ones — lose money when playing from the small and big blinds.

Voluntarily putting in that third blind from UTG thus increases your risk.

Not only you'll be playing a bigger game but very likely be playing from out of position in most post-flop situations.

The scenario is considerably different when you straddle from the button, which is the most profitable position at the table for most players.

Making the game play bigger while enjoying position post-flop can be a profitable strategy.

Remember that making smart decisions is the key to success in poker.

Always make it clear to yourself the reasoning behind your decisions with every move you make when playing poker.

That goes for decisions made in a hand, as well as the decision whether or not to straddle when given the opportunity.

Even though poker is a social game — and I highly recommend you try your best to enjoy it and also to be sociable while playing — you shouldn't feel bad or hesitate at all to refuse to straddle if this is your wish, even if everyone else is doing it.

Stay disciplined, and evaluate every situation in order to make the best choice for you.

Video: How to Use the Straddle Bet to Win More Hands

In this conversation part of the PokerSimple series, poker-lifers Tommy Angelo and Lee Jones explain how you can use the straddle bet in poker to your own advantage.

Why do you straddle in poker?

The straddle bet 'buys' you the right to be the last one to act. This way, you can act as if you were on the big blind even if you are not.

Is the straddle considered to be a raise?

According to Robert's Rules of Poker by Bob Ciaffone, the straddle is a third blind, not a raise. However much the straddle is, that's the new big blind.

How much can you straddle in poker?

Is straddling profitable in poker?

Hardly so. The straddle is a blind bet, and it is never +EV to invest in your hand before you see what cards you hold.

Pot-limit Omaha is her favorite variant, and among her many PLO scores is an 11th place in the $10,000 Pot-Limit Omaha 8-Handed Championship at the 2017 WSOP.