Three Factors to Consider When Taking Shots at Higher Stakes 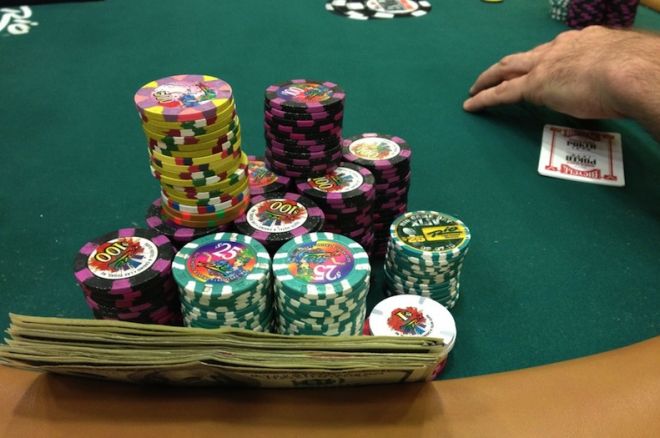 Shortly before the climactic ending to the high-stakes heads-up match between Teddy KGB and Mike McDermott in the cult classic poker movie Rounders, McDermott delivers a very important line via his voice-over narration:

”I told Worm you can’t lose what you don’t put in the middle. But you can’t win much either.”

McDermott has just cleaned the floor with Teddy KGB, winning enough money to cover his friend Worm’s debts and pay back half of what he owed his professor who had loaned him a large sum of money. But as he readies to leave the club, Teddy KGB goads him into playing longer.

”After all, I am paying you with your money,” says the Russian.

The comment sparks a fire in McDermott, who had dropped three stacks of “high society” ($30,000) to Teddy KGB in the first sequence of the movie. McDermott decides to stay, loses a large chunk of money, then comes roaring back to beat Teddy KGB out of tens of thousands of dollars.

McDermott’s final decision to “take a shot” in a game he isn’t bankrolled for is clearly driven by a Hollywood agenda to create a dramatic “good-vs.-evil” finale. Even so, we can certainly learn something from it.

From a poker standpoint, McDermott obviously makes a very risky choice to stay. In fact, his decision parallels the movie’s opening scene in which he similarly plays above his usual stakes and loses his entire bankroll. In other words, McDermott provides a prime example of a player recklessly moving up in stakes.

Now, had McDermott discovered Teddy KGB’s infamous “Oreo cookie tell” prior to deciding to continue the match, that would make his choice different. If he knows that his opponent is going to open himself up to certain leaks or mistakes, then he is taking a more calculated risk, and not just a random shot in the dark.

In poker, knowing when to take a shot is a very important skill to develop. If you look at all of the elite professionals playing in both high-stakes tournaments and cash games, they tend to select games that are much larger than their bankroll can sustain. Some of them are gambling, recklessly risking large sums of money to try and hit a big payday, while the true professionals are making sure that they take a more calculated approach. They may not be strictly following recommended guidelines for bankroll management, but they are nonetheless managing their risk carefully.

There are three factors that can distinguish a careless decision to move up in stakes from a more deliberate risk to try and capture a bit of value.

The first and most important aspect of a well thought out “shot” is proper game selection.

In McDermott’s case, he didn’t game select at all. In the initial match he had to beat Teddy KGB because he owed him and his associates money, but after that he could’ve left the Russian’s club and found a much softer seat in the $10/$20 game at the Chesterfield or in the hi-low game at that goulash joint on 79th Street.

If there are no “fish” or “spots” playing in a game that is too expensive for your bankroll, then you shouldn’t sit down. However, if you roll up to your local casino to play in a $1/$2 no-limit hold’em cash game and see that there are a couple of amateur businessmen or intoxicated tourists playing with full stacks in a $2/$5 game, then you may have come across a great opportunity to take a shot.

However, if you sit down and realize that they are playing really tight and not giving any action — or worse they are just about to return to whatever conference they’re attending in town — don’t be afraid to pick up your stack and head over to the $1/$2 game. There is no shame in diligently selecting the games you play in if your main goal is to profit.

Once you decide to take a shot, there are two more factors that you should consider, both of which can help you tremendously.

First, and this one’s obvious, you need to be confident. If you are in the middle of a downswing where down is up and vice-versa, you may not be in the right mindset to sit down and risk a large percentage of your bankroll.

Although we know that poker is a skill game, there is still a lot of variance in a small sample size, and you could have aces cracked on the very first hand. If you understand that you may run really bad and are prepared to live with the consequences but feel confident in your abilities to beat your opponents in a given game, then by all means go for it.

The other thing you can do before taking a shot is to sell action. Again, McDermott was unable to do this because all of the cronies in the club were on Teddy KGB’s side, but selling action is a key part of high-stakes tournaments and cash games, and in fact many of those who take shots at higher-than-usual buy-ins are doing so after having sold pieces of themselves.

If you are a good player and you truly have an edge in the game you’re entering, then intelligent investors will put their faith in you. You’re still taking a risk by wagering a percentage of your own money, but backers can give you a bit of financial security, allowing you to focus on the cards and not the money at stake.

Taking shots in poker isn’t for the faint of heart, and if done improperly they can lead to “confirmed busto” threads on TwoPlusTwo along with an exposure to extreme monkey tilt. But there are situations where it’s okay to take calculated risks. As McDermott says, when you play it safe, you can’t lose what you don’t put in the middle.

But you can’t win much either.