After Bluff Catching on the Turn, Fold to River Bets if Unimproved 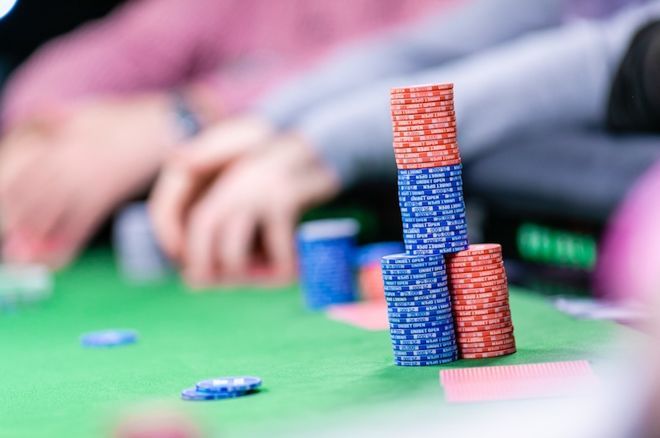 When you are at the bottom of your calling range on the turn, you will probably have to improve on the river in order to handle another bet, especially a big one.

This is a key idea behind bluff catching. The bottom of your calling range on the turn can win on most river cards after both players check the river through. Unless you improve, however, you should be folding the bottom of your range to bets on the river.

The following hand from a game of six-handed 100NL ($0.50/$1) played online shows exactly this concept in action.

A Preflop Three-Bet Followed by a C-Bet

Second to act, a stubborn recreational player opened with a raise to $3, and after it folded around the small blind made it $13.50. The big blind ducked out of the way, but the initial raiser called.

, a strong flop for the three-bettor's range in general. Strong pairs connected well and wheel aces will have a pair or a gutshot. Meanwhile, it is unlikely that an early position player could open and call a three-bet with either 2-2 or 3-3. Neither player on this flop could have two pair, in most possible worlds.

In other words, we have a flop situation in which the three-betting player can probably continue with his entire range, expecting to exert pressure on a range that does not have many strong equity hands.

Sure enough, the small blind continued with a bet of just over $10. The recreational player called with the benefit of position.

With the pot having swelled to about $48, the turn brought the

More importantly, this turn card hardly ever improves the player in position. Much of that player's flop calling range was J-X hands and pocket pairs like T-T and 9-9, with the exception of the trapping J-J. Unless this particular recreational player is trapping with A-A often preflop, he is going to have a tough time taking more heat.

And heat is what the small blind turned up, who bet almost $22 this time. Many players, recreational and professional, are loath to fold to small bets when they have the power of position. By betting less than half-pot, the small blind has not dialed up the pressure in a way that is commensurate with his range advantage, but he is also signaling a threat to move all in on the river, since only $67 would remain in the effective stacks should the $22 be called. It was.

The river ran dry — it was the

The small blind moved all in for that remaining $67, holding

, and our stubborn recreational player called with

If we look at the recreational player's decisions to stay in the pot, we can actually commiserate with his journey — up until the river, that is.

Before the flop his hand feels too strong to fold (it might not be) and it is certainly not strong enough to four-bet. On the flop he has two overcards, the flop bet is small, and he has both a backdoor wheel draw and a backdoor Broadway draw. On the turn one of those straight possibilities emerges and he also doesn't need to worry about the diamond draw as he conveniently has the

river, for example, he can call confidently facing a shove.

Calling back to the point made in the opening sentence, if the bottom of your turn calling range does not improve on the river, you might expect to win when the river action goes check-check, but you will have to surrender the pot when another bet is made, especially a big bet.

did not improve. Even worse for our recreational hero is the fact that he loses to the main bluffing hand the small blind could have, A-K.

When you don't even beat bluffs, river decisions are usually easy. Unfortunately for this player, this time, he hung on the whole way. The first three times were all defensible, but the last time was not.

Keno Strategy: How to Win at Keno

Start Your December with 25 no Deposit Free Spins