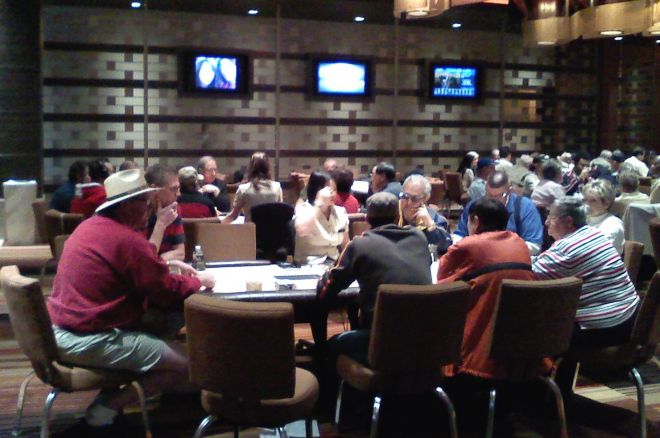 As the headline suggests, this series of articles is intended for people who have played poker online and/or in home games, but have little or no experience as yet playing in a “brick-and-mortar” casino. Last week, we discussed how to get yourself into a cash poker game at a casino. Today let’s talk about both keeping that seat and leaving it — which, of course, you will have to do sooner or later. These procedures do not apply to tournaments.

Two things can happen that force you to move to a different table:

1. A game may break up, in which case you’ll have to move to a different table if you want to keep playing. The poker room staff will direct you what to do if that happens.

2. When you’re first assigned to a game, it might be what’s called a “must-move” table. This happens when the poker room manager has enough players to start a second table, but isn’t sure that there will be enough players coming in to keep both of them going at healthy levels. Many cash-game players don’t like short-handed tables, so when a few people leave a game, it can trigger a cascade of exits, causing the game to die.

To protect the vigor of the first table, the newly starting one can be designated “must-move,” meaning that players will be required to move from it to fill seats in the first game as they become available.

Other than those two scenarios, you can keep your seat as long as you feel like playing.

Occasionally I’ve overheard somebody new to casino poker asking the dealer if he can take a restroom break. Poker veterans may find this funny and naïve, but it’s a perfectly legitimate question — the kind of thing that everybody just sort of expects you to know, but nobody tells you!

The answer is yes — you can take a break to go to the restroom, check on your sports bets, make a phone call, hit the ATM for more cash, or walk around to calm down after a bad beat. The game will just go on without you. Of course, there’s a limit to how long they’ll hold your seat, so if your absence will be longer than 15 minutes or so, as with a dinner break, you’d better ask the dealer how long you can be gone and still claim your seat upon your return.

If you lose track of time or are unexpectedly delayed getting back, you may find somebody else where you had been sitting. Don’t panic. The poker room staff will have carefully counted, bagged, and stored your chips, so you can reclaim them.

A point of etiquette: It is considered rude to take a long dinner break, then come back, pick up your chips, and cash out for the day. You can probably see why this will earn you scorn — you have left the game short-handed for no good reason. If you had cashed out before going for dinner, other people on the waiting list could have taken your place. If you plan to return to the game, but something changes your plan, retrieve your chips and forfeit the seat as soon as possible. And it wouldn’t hurt to offer an apology to the table for having tied up that seat, so they won’t think you’re a thoughtless jerk.

At some point, you may decide you’d prefer another seat at the table. This might be for strategic advantage, for more elbow room, to get a better view of the big-screen TV, or because you’re stuck next to a guy with terrible body odor. (Don’t laugh! Spend enough time in a poker room, and it will happen!)

When a player leaves the game, other current players get first dibs on it before a new player is seated. If you want to move, just be the first to speak up when a seat you want is vacated. To prevent arguments about who claimed it first, most poker rooms have a “seat change” button available. Just ask the dealer for it when you first decide you want to move. That will reserve your “right of first refusal” as seats open up. Slide it back to the dealer when you move.

By the way, the chairs around a poker table are designated by a universal standard, though they’re not marked. The first place to the dealer’s left is called “seat one,” or “the one seat,” followed clockwise by Seat 2, etc. For most games, the last seat, which is on the dealer’s right, is either Seat 9 or Seat 10. (Some poker variants, such as seven-card stud, are run with fewer than nine players so that they don’t run out of cards.) When requesting a change to a specific seat, you’ll look more knowledgeable if you ask for it by number.

Sometimes you may decide that you need not just a new seat, but a whole new table. Maybe there’s a cold draft that’s making it impossible to be comfortable, or too many chatterboxes, or unusually tough competition, or you want to join your buddy in his game. For this, you need to ask permission from the “floor person,” i.e., one of the room supervisors. They will be happy to accommodate your request when they can do so without leaving a game short-handed.

Leaving and Cashing Out

When you’ve had enough poker for one session, feel free to leave at any time. You don’t have to wait for the end of a hand (unless you’re in it), or for the button to be in a particular position. You don’t need anybody’s permission. You can just pick up your chips and walk away. However, it’s polite to say something friendly to the remaining players. Exiting lines like “Good luck, guys,” “Thanks for the game, everyone,” or “Sorry, gotta go get the kids in bed” are trite but sociable.

If you happen to leave after losing all your chips (it happens to all of us), don’t stomp off angrily. Be a good sport, smile, and say something friendly and disarming. It will make you feel better about the loss to have been able to keep your composure.

In a few places, the dealer will cash out your chips. It’s much more common, however, for you to have to take them to the front desk or the cashier’s cage for the exchange. Unless you have just a few, don’t try carrying them in your hands. They’re more slippery than they look, and it creates a big mess and embarrassing disruption if you accidentally drop them all over the floor. Ask for a chip rack to carry them in — or just help yourself to a rack if you see one lying around. They are often on empty tables, or on the floor under the table, or in stacks near the cashier.

Many casinos give you credit towards some sort of rewards program for your hours of play. It’s usually worth asking the poker room staff to get you a player’s card when you first arrive, if you don’t already have one. You may get swiped in at the front desk or at the table. If the latter, the dealer will automatically stop the clock on your play when you leave, but if the former, you’ll have to remember to have somebody swipe your card on your way out, or you won’t be given credit for those hours.

Next time we’ll talk about the play of your first few hands, and the mysteries of the moving dealer button.