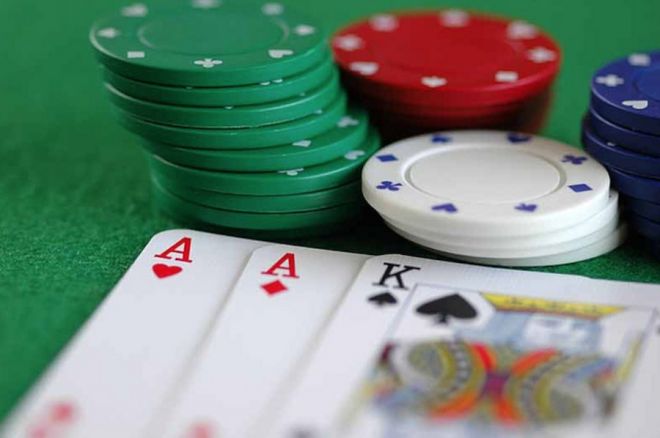 The game is an interesting hybrid of other no-limit games. For the first few hours the games are limited to either hold’em or Omaha. Then, the range of games broaden to any “hold’em structured” games — meaning any flop games that are played with blinds. After midnight or so, however, players start to ante and all games are allowed, including the stud games that I really love.

I introduced a stud variant into the mix when I joined the game a few months ago. I call it Boston Stud. It’s a simple game… on the surface.

Boston Stud is played exactly like five-card stud, but with a couple of additional twists. First of all, it is played hi-low, without a qualifier. It is also played “cards speak” — that is, without a declare. Following the fourth (and last) betting round players expose their down card, and the pot is split between the player with the best high hand and the best low hand. Straights and flushes do not count against the low, and the ace may be high and low.

I love this game. I think it gives an advantage to the best and most thoughtful player. Let’s look at how that is so by reviewing a hand of Boston Stud from start to finish. In so doing, you will also learn how to think through other stud home game variants.

The first strategy consideration occurs on the first two cards, with one common card. Here’s a typical deal. The first card is the down card (in parentheses):

The betting begins with the high card, in this case with the player showing the

. Let’s think through each of these hands and figure our whether to call, raise, or fold. In most cases, the decision is very simple.

: Two babes (when combined with the five on the board) plus a king is not a good starting low hand. And there is no high draw (made even worse as both an ace and a king are among others’ up cards). If you are playing in a high ante game and if you think you might get everyone else to fold with a bet, you might try to bluff with your scare card ace if you were betting in the position this hand was dealt, or if the high card

to your left started things off with the first betting option. But against typically poor and overly loose home game players, you are likely to get at least one or two callers for your raise, and your hand doesn’t justify betting in that instance. This player should check, then fold to a bet. Checks.

: This is a very good starting hand. There are three cards toward a solid low — A-5-6. You should raise here — enough either to knock everyone out (assuming a reasonable ante) or reduce the field to one or two opponents, preferably the ones with high cards showing. What you’d like, ideally, is a single opponent who has a much worse low draw. There are so many more cards (three to you and three more common cards) left to be dealt that may be used to make up your hand, you should be eager to get into a battle against one other who only has a realistic chance of winning one half of the pot. When you have one half of the pot locked up and are competing for the other half, that’s called “freerolling,” and it’s the ideal situation in a game such as this. Bets $10.

: This player should fold, and does. Folds.

: This is a very bad starting hand, but it might look acceptable to a bad player. You have two cards to a high straight, but you have no reasonable chance to make a low. It’s not worth a longshot draw to half of the pot, but the player stays in. Calls.

), while the down card is a nine — not a good low card in this hand, as there is an eight and two aces showing. You have no reasonable high draw, since you don’t have a pair, or even two suited or consecutive cards. The only way this hand would be playable would be for a very small initial bet, a hope to improve to three babes on the next card, and the additional hope that the two aces each get a high card that discourages them from continuing. Some games are so passive on the first round that you may be fairly confident that no one else will raise. If stacks are very deep, as in this no-limit game where everyone started with $500, you have huge implied odds (that is to say that you might be able to win a huge hand if you win), meaning you might call with a bad starter just to see how the next card might greatly improve and greatly weaken your opponents’ hands. Calls.

: This is a very bad starting hand that should be folded for the reasons stated in the J-Q hand above. Fold! Folds.

: This is also a very bad hand. It may be slightly tempting as a possible high hand, but don’t be tempted. A low pair (in this case, fives) when coupled with a high kicker like this queen (duplicated elsewhere to make it even less desirable), is a hand with no future as a low, and so is only drawing to half the pot (and drawing very thinly at that). Let it go. Calls.

: Another very bad hand, again despite having a pair to start. A low pair and a high kicker is drawing to only half the pot and should be folded. Even if you caught a two-outer and hit trips on your next card, you may not be ahead of other hands. The player sticks around, though. Calls.

: Also a very bad hand that may look like a borderline hand to a bad player. The two-flush is really worthless and there’s no low draw. Folds.

: Folding is good, but with so many in the player decides to stick around. Calls.

has the high hand.

: This hand is much, much worse than it appears to the typical home game player unfamiliar with hi-low games such as this one. Though the two kings look good and may well be the best high hand at the moment, it will almost surely lose the high if unimproved. The right play would be to check. Checks.

: This hand has gotten worse, but not by much. Though the

doesn’t make the hand better, it hasn’t fallen far behind anyone else’s apparent lows, with only one hand having a lower board (the

). The hand also has some deceptive quality to it, with two spades combining with one spade on the board for a possible four-flush. True, three other spades are out, but an average home game opponent might not notice this, thinking that a bet indicates that the player is aiming for a very high flush or that he has a pair of aces. Either way, the best play here is to bet — and bet fairly large with a $72 pot. I’d recommend betting $40 here, hoping to take down the pot for a nice profit. And if you don’t win here, you will probably be ahead on the low, with a hand that will look like a high flush if another spade hits your hand or the board. Bets $40.

: This bad hand has not gotten any better. Unless you believe you can bluff your way to victory, you must fold here. Folds.

: This bad starting hand has not gotten better with the paired treys, though it might look better. Unless making a wild bluff representing trip treys is in your repertoire (and I don’t recommend it), you must fold. Folds.

: This hand also should be folded. A player might think that as the lowest board, it has some value to bluff its way to half a pot. But that would be a very costly error since it is drawing to a worse low than the

. Even so, it is a mistake that many players may make, so we’ll follow along with it here. Calls.

: This player can’t resist the notion that he is ahead with his pair of kings (even though another king has folded). Calls.

This is a very useful though totally random hand that in fact duplicates many, many situations that I have seen in real games. The player showing

: This player should not be in, just having a weak high hand and no draw for low. Even so, with his bad play, he’s here. He sees that his pair of kings is better than any of the other exposed hands. He’s heard that you should be aggressive. So he bets $40. This is a terrible bet for many reasons. It is too small to get anyone with any draw to fold with $192 in the pot. And each of his opponents at least have draws to straights (and one could have a flush draw) that he cannot beat no matter what his river card is. He also may already be behind another concealed high hand, since each opponent could already have a straight. He should check and fold to any bet, but he doesn’t. Bets $40.

: This player now has a straight and a good low (but not the lock low, as his opponent with an exposed

may have a wheel). He has a nice question to consider. What kind of a raise will win him the most money? On the one hand, he would be happy to win the entire pot of $232 right now, so a very large raise might make sense. On the other hand, he might be able to win even more if he could get heads up against the opponent to his right, knocking out his other opponent who might have him beaten for low with a draw for a better hand. It’s a close call, but I’d recommend raising, and that he does. Raises to $200.

: This player sees that he is behind for the low, and must believe that he is behind on high but that he can escape if he or the board hit a six (to tie for high) or an ace. He believes that the raise from his opponent may mean his opponent has a deuce in the hole, and therefore a wheel. The bet reprsents a lot of money to him, so without any hand at all and only a thin draw, he decides to let his hand go. Folds.

: The raise from his opponent woke him up to the possibility that he is drawing dead. He is sorry for betting the $40, but decides not to throw good money after bad. Folds.

As you can see, there is a lot to think about in this interesting dealer’s choice stud game. In my next column we’ll explore another stud variant — 7-card stud, hi-lo declare.

The Weekly PokerNews Strategy Quiz: If You Can’t Beat Them, Bluff Them