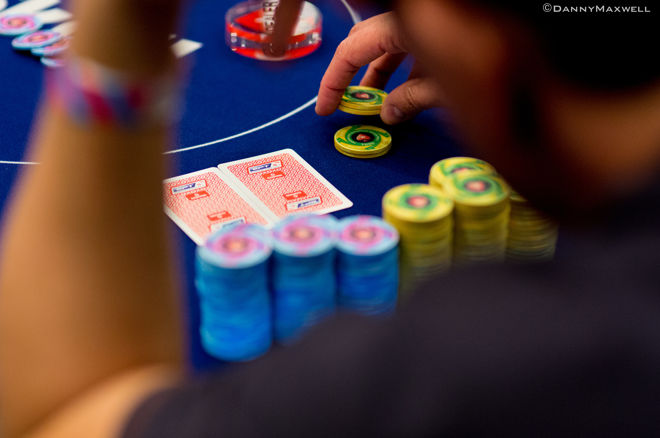 Tell me if you've heard this before.

A friend has busted from a tournament or lost a big pot in a cash game, and catches you shortly afterwards with an urge to give you a blow-by-blow account of his misfortune. Since you're a good friend you listen, even willing to sit through a dreaded "bad beat" story if necessary.

The hand history begins with an opponent raising, and it folds to your friend. He continues: "I'm in the small blind and look down at..."

Many poker hand stories with unhappy endings begin with the tellers in the small blind, an especially tricky position from which to play, especially for newer players. Some get into trouble repeatedly calling raises from the small blind, dropping hand after hand as they struggle to negotiate playing from out of position postflop.

Online players in the habit of reviewing their stats in tracking programs are well familiar with how the later positions — the button, in particular — are often their most profitable, while the big blind is typically where they lose the most on average. But the small blind can be a huge loser, too, for those who don't appreciate the trouble it can cause, or who haven't found ways to overcome the position's inherent disadvantage.

First and foremost, you should tend toward conservative play when it comes to entering pots from the small blind. When someone raises and it folds to you, having already paid that SB may make calling seem more attractive, and less potentially harmful. It's a "discount," right? Think, though, about what it means to call a preflop raise from the small blind.

Say you're in a tournament, the blinds are 100/200, and someone raises to 500 from the cutoff. It folds to you in the small blind where you've been dealt

. (Or, if you like, some other non-premium though above-average starting hand.)

You may well believe your opponent to be attempting to steal, which would suggest your hand is likely a better starter than a lot of the raiser's opening range. However, calling the raise sets you up to continue postflop from out of position, from where even a nice-seeming flop like

(or something similarly less-than-premium). However, you're not in the big blind — here, you're in the small blind, which means the big blind can get involved, too!

If you call that raise of 500, think about the decision faced by the big blind. Having already paid 200, the BB only owes 300 more to see the flop. Meanwhile, both you and the cutoff have contributed 500 apiece, which along with the big blind's 200 means the BB is getting 4-to-1 pot odds to continue, only needing to pay 300 to have a chance at the 1,200 in the middle.

This is nearly always going to be the case when you call a raise from the SB — you necessarily give the BB especially inviting pot odds to stick around. That makes it all the more likely you aren't just going to be facing one opponent postflop, but two — and from out of position.

Generally speaking, if you're going to get involved from the small blind, even with a hand like

, reraising is going to be much preferable to calling. Doing so likely knocks out the big blind, and may even win you the pot if you're suspicion was right about the cutoff going for a blind steal. That said, still be conservative from the SB, only three-betting when your player reads and the situation recommend it as a likely winning option.

An exception to this advice arises during those instances when the table folds around to you in the small blind, setting up a blind-vs.-blind encounter with your neighbor to the left. While raising with medium-to-strong hands can still be fine, some players prefer calling to raising from the SB with playable-but-not-premium starting hands.

The justification for calling is related to a desire to control the size of the pot when entering into a postflop heads-up situation where you'll be out of position.

The fact is, many players will still be encouraged to call your raise, some with a pretty wide range of hands, which makes it harder to narrow down what they might have as the hand proceeds. Think about it — for players in the big blind, this represents the only scenario in which they can call a preflop raise and enjoy having position thereafter for the remainder of the hand.

All of which is to say, it's worthwhile to continue adopting a conservative approach from the small blind even in these blind-versus-blind situations. Again, hopefully you've been paying attention to how the players sitting next to you play, and so if you've seen the big blind repeatedly shying away from aggression, you can be more encouraged to raise from the SB.

But generally speaking, use caution and be selective about getting involved from the small blind. Better opportunities are out there — in fact, the button is just a fold away!