Introducing Range-Based Thinking Into Your Reads in No-Limit Hold'em 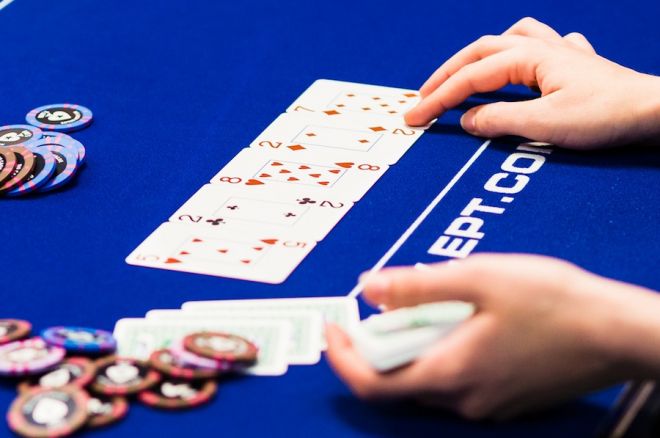 You often hear poker pros and commentators talk about putting opponents on a "range" of hands rather than a particular hand in no-limit hold'em. In fact, sometimes we'll hear them discussing hand ranges even when we have the benefit of knowing players’ actual hands!

For example, during coverage of the four-day $300,000 Super High Roller Bowl last week, Nick Schulman offered many hours' worth of insightful discussion on hundreds of NLHE hands. In most of those analyses, you could hear Schulman outlining the possible ranges of hands players held even though we could see their exact hole cards.

Why? Because by talking about ranges instead of specific hands, Schulman could better describe the thinking of each player regarding an opponent's possible holdings and thus better address how that player might choose to proceed. It's a much more meaningful way to talk about strategy than just reacting to results — and it's a good habit to develop when playing, too.

The First Step: Know Your Opponents

Range-based thinking often starts with understanding an opponent's style and tendencies as demonstrated over the course of previous hands you've observed from that player. Sometimes we don't know the first thing about a new opponent, but very often we have at least some idea about how a player plays, even after only a few hands.

The most often-used categories for such profiling are "loose" and "tight" (referring to frequency of hands played) and "aggressive" and "passive" (referring to how players play those hands). These two sets of contrasts produce four player types:

But they nonetheless remain a helpful first step toward range-based thinking once you get involved against a player whom you've been watching.

Say you've pegged a particular opponent as tight-passive or a "rock." He's rarely voluntarily put any money in the pot, folding most hands and only showing down ace-king once in several orbits. That alone should help you narrow his range should you get involved in a hand against him going forward.

A hand arises in which this player opens with a raise from early position, and after looking down at

you call from the button. The blinds step aside, the flop comes

, and he leads with a two-thirds pot bet.

Identifying hand ranges generally involves gathering and applying three types of evidence — your opponent's profile (as you've determined it prior to the hand), betting action, and board texture. Here you have a tight-aggressive player making an early-position raise (unusual for him) followed by a healthy-sized continuation bet on a somewhat dry board.

That's plenty of information to reduce his range of possible holdings considerably. All of this adds up to strength and a very narrow range, one that likely includes only certain "made hands" (i.e., big pocket pairs or

, really), most of which probably are ahead of your eights.

Profiling, Betting Action, and Board Texture

Now let's make your opponent a smart, tight-aggressive player and move him to the cutoff seat (with you still on the button), then keep everything else the same with him also c-betting that

flop. The TAG player's range now widens to include hands like

, some middle pocket pairs to go along with the premium ones, and perhaps even a few suited connectors (including a couple of

With such a player, your pocket eights may well be ahead of a lot of his possible holdings and so you call the flop bet. Then after the turn comes a seeming blank — the

The combination of profiling, betting action, and board texture is helping you narrow his range even further. You consider his line as articulated on all three streets (preflop raise, flop bet, turn check), and remove his pocket pairs and other made hands, leaving him with

You bet half the pot, and he calls. Now what? From that narrow range hands like

might become a little more likely. Meanwhile the other non-suited hands and

You might be tempted to put back into his range certain

hands, too, although more often than not such second-guessing is inspired more by your own hand strength than by a clear-headed read of your opponent's actions and what they are saying about his possible range of hands.

or other made hands rather than check-call. Don't at this point start talking yourself into worst-case scenarios.

This is probably where most newer players have the most trouble with postflop play. As a hand proceeds from street to street, ranges should be narrowing as each new piece of information — each new community card, each new action — reveals itself. Newer players with less experience with range-based thinking will instead sometimes arbitrarily widen their opponent's ranges as new board cards (especially ones that seem bad for their own hands) make them forget about an opponent's earlier actions.

For example — say after your opponent check-calls your turn bet, the river brings the

and he checks. Is he more or less likely to have an

hand now? Or has anything changed, really?

Before that river card fell, you'd already eliminated all but a very few, specific

combos from this tight-aggressive opponent's range —

, to be exact. His checking an ace here really shouldn't change much. He is aggressive and so might bet after pairing an ace. But he's also smart and might check-call here with an ace, too.

Against such a player, checking behind with your eights is probably a recommended play given that he probably wouldn't be calling a bet without an ace (or something better than your eights).

Sometimes even good players miss something early on in a hand — or make a mistake when profiling a player — that gives them legitimate reason to revise their thinking on the turn or river and perhaps alter (or widen) the range of hands on which they've put an opponent. Sometimes also players will take weird lines — an unorthodox slow play, a surprise river check-raise bluff — that don't really "add up" but can make range-reading much more complicated.

More often than not, however, thinking in terms of an opponent's possible range of holdings gives you a much clearer idea of the meaning of each action throughout a hand.

Watch your opponents and use their actions to help you categorize their styles and tendencies. Use that knowledge to "narrow" them to a profile, then when in a hand against them, use that profile, their actions, and the board to narrow their ranges, helping you to find the most profitable way to play against them.

What Could My Opponent Have? Solving Range-Reading Problems by Counting