A “Preflight Checklist”: Six Things to Think About Before the Flop 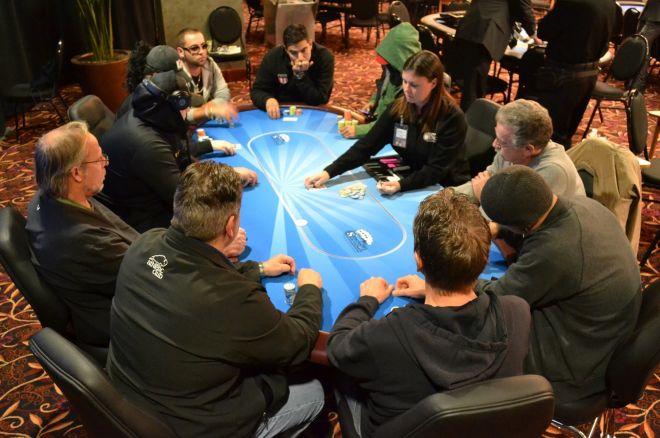 Last week in a home game that I play in occasionally, I was recruited into being the dealer for most of the evening, in addition to playing. I found that the quality of my play deteriorated significantly, because my concentration was diverted to the mechanics of keeping the game flowing.

That experience reminded me of how much my success as a player depends on being analytical in my approach to the game. Compromise my ability to think hard about what’s going on, and you take away my edge — and with it, my profits.

In terms of thought processes, I find that one of the busiest times is during those few seconds between when preflop action is complete and when the flop is revealed. This is a time when I see many players relax their attention, because it seems that nothing is going on. But I find it useful to cram as much mental energy into that sliver of time as I can. In fact, I have a specific routine that I try to follow:

First I recheck my hole cards, memorizing both ranks and suits. I never want to join the players who see two of a suit on the flop and then look at their hole cards again to see if they have a flush draw; rather, I want to be the one who already knows that, and watches the others to see who is looking.

Next I recheck my position relative to both the button and the others in the hand. Am I going to be first to act? Last? Somewhere in the middle? I count how many are still in after preflop betting is complete (dealers are supposed to announce this, but they get it wrong too frequently to rely on) and make a mental note that I’m third of four, or whatever. I also note who is first to act, so that I will know which player my attention will need to be on once the cards are out.

The next thing I do is estimate the pot size. There’s no need to be precise to the dollar. In a $1/$2 no-limit game, if there has been a raise to $10 with three subsequent callers, $40 will be my estimate. I ignore any limpers who folded, what the contribution from the blinds might have been, what rake will get taken out, and so on. I don’t need to be that precise.

Based on that, I decide on an amount that I will bet. That doesn’t mean that I will bet; the “whether to bet” decision depends on lots of factors, such as the flop texture, my relative position, whether I was the preflop raiser, my table image, what I know about other players’ tendency to aggression, stack sizes, and other factors. But I want to have in mind a default bet size — what I will bet if I decide to bet and it’s either checked to me or I’m first to act. It’s usually in the range of 1/2 to 3/4 of the pot, though I always reserve the option to change this if there is some compelling reason to do so.

After I have rehearsed my hole cards, noted my relative position, estimated the pot, and settled on a default bet size, if there is still time, I look around at opponents’ stacks to remind myself about which players in the hand have the big stacks and can therefore either bust me or double me up, or which ones have the short stacks and might shove light but can’t hurt me much.

To the extent that I can, I also try to refresh what I know about my table image and what mental state the players in this hand might be in — e.g., winning, losing, distracted, bored, on tilt, or ready to go home.

The goal of all of this mental scouting work is to clear the runway, so to speak. I want all of the above information fresh in my mind for instant access, so that I can direct my attention to two other things:

If the basic information required for these more demanding mental tasks has been clarified and put front-and-center in my brain, then my limited cranial resources are freed up for figuring out the poker.

Any mental effort that you have to devote to checking your position or hole cards or stack size is brainpower that can’t be used for performing crucial, more difficult tasks, such as running through lists of what hands may be sitting under your opponents’ card caps. It’s also hard to focus on deciphering what an opponent’s body language is revealing about his hand strength if you’re busy rechecking whether your red cards are hearts or diamonds.

You will frequently see players chatting, watching TV, and engaging in various other distractions during what I consider to be the precious few seconds between the close of preflop action and the flop hitting the table. You can then watch these same players as they try to catch up (whose turn is it? how much is in the pot?). You can see it on their faces as they look around, trying to put together the core information they need at the same time that they’re struggling to make an analytical decision. You can see them go on overload and make mistakes. They also give off a ton of revealing information about how much they like their situation, because they’re mentally so preoccupied figuring everything out all at once that they have no extra attention to keeping a poker face, and they therefore leak tells.

Don’t be one of those players. Discipline yourself into a set routine of information review before the flop comes out, like a pilot going through a preflight checklist. I think you’ll find, with some practice, that it goes a long way toward freeing your mind to concentrate on decision-making, which is what determines whether you make or lose money.