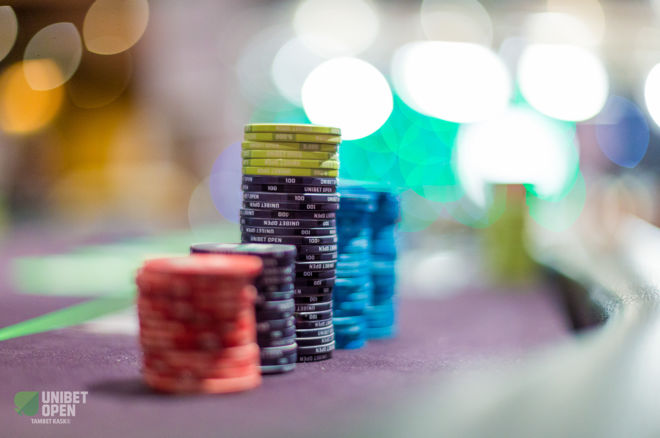 It's the middle stage of the tournament, though still well off the money bubble. You're not among the chip leaders, but you're a little above average and have a reasonably comfortable number of big blinds with which to work — let's say 35 BBs. Enough to keep right on attempting to steal blinds and antes, playing aggressively from position, and generally drawing from the whole spectrum of available postflop plays.

— and from under the gun you raise 2.5 times the BB. A player on the button calls as does the big blind, and the flop comes

. It checks to you and you bet a little over half the pot, and the button folds. The big blind then makes a substantial check-raise of nearly three times your original flop bet.

You see the player in the big blind has about 20 BBs left behind, and with his check-raise there's now more than that in the middle. You have the check-raiser covered, though some quick math tells you should he end up doubling through you, you'll be down to just under eight BBs.

What do you do?

We could get into further specifics, all of which should affect your decision. You've been active, betting and raising a lot, and so your image is such that you might not be suspected of having a strong hand that hit that flop. That might influence how you proceed. So, too, would the big blind's playing style and frequency of getting involved and/or showing aggression. As would whether or not he's the type to call preflop raises from the blinds with hands like king-jack or queen-ten.

Let's set those factors aside, though, and consider just one aspect of this situation — the stack sizes.

For you, how much does knowing that no matter what happens you'll survive the hand tip the balance toward sticking around here? You know you can't be eliminated by this player, but you also know to lose the maximum would leave you just outside of the danger zone, chip-wise, with the blinds coming up. How does that influence your thinking?

Most tournament players play with a keen awareness of stack sizes, usually knowing — at least once a hand reaches postflop — whether they have their opponent(s) covered or they themselves have the potential to be at risk before the hand is over. In tournaments it's a good habit every time a hand is dealt to make a quick check around the table to gauge where you stand relative to everyone else, noting even before the first action who you have covered and who covers you.

That said, fewer players are necessarily as cautious as they should be in situations like this one where they have a player covered, though not by much, not necessarily appreciating just how detrimental it would be to their chances of success going forward if they were to lose a big pot to such an opponent.

In the above hand, folding to that check-raise while holding top pair/top kicker might seem too tight to some, but it isn't necessarily a bad option.

The call might seem momentarily innocuous. But by making it you're also edging perilously close to having to "go all the way," too.

Knowing that you can't get knocked out in a hand does matter, of course. But it's possible to overvalue the benefit of having eight BBs left versus having none. Expert short-stackers might not mind grinding the eight-BB stack, but few actively desire being reduced to shove-or-fold mode — as will just about be the case after paying another round of blinds. (Also worth thinking about for some is the mental challenge that would follow the shock of losing more than 75% of your stack.)

In tournaments, big stacks are actually more difficult to play than short ones. With the ability to play more hands and having more options available to you when you do, you end up having to make more overall decisions — including more difficult ones — than you do when short.

If you're the chip leader or especially deep, you can afford to make incorrect choices here and there. But when up against opponents with similarly-sized stacks, you haven't the same luxury. In those situations, learn to avoid putting too great a percentage of your chips in jeopardy, especially when boards turn scary, opponents show postflop aggression, and/or hands are multi-way.

Also, don't use the excuse of having just enough to avoid elimination tempt you too greatly into making unnecessarily risky choices.

Jonathan Little Reveals One of His Favorite Bluff Spots