Understanding What It Means to Be “Pot Committed” 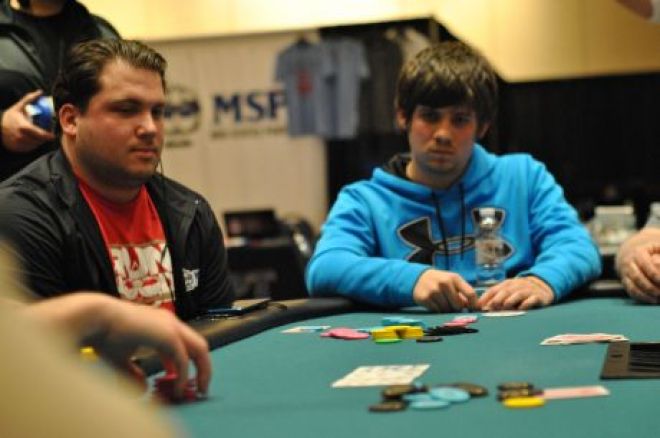 “I had to call… I was pot committed!”

One of the more commonly uttered justifications for suspect decisions in poker is for players to claim they were “pot committed” in a hand when in they really weren’t. It’s a concept many think they understand, but sometimes they misapply it or are mistaken. But it’s one well worth learning, particularly when playing “big bet” games like no-limit hold’em and pot-limit Omaha in which bets on successive streets can quickly transform a small skirmish into major melee.

The Point of No Return

Generally speaking, being pot committed means having arrived at a point in a poker hand at which folding to any bet or raise has become an incorrect play. Such a situation is determined by pot odds and how those odds compare to your chances of winning a hand.

It isn’t exactly the same, but being pot committed is sometimes likened to reaching a kind of “point of no return” such as might arise other contexts. Take the situation of opposing factions building toward conflict who make declarations suggesting a particular action or advancement necessarily removes peaceful alternatives. For example, when Julius Caesar led a legion southward toward Rome and crossed the Rubicon river, that action signaled an inexorable commitment to war, with the phrase “crossing the Rubicon” later coming to represent just such a commitment.

Military strategists have long discussed the “Rubicon” example and the mindset it represents, in particular the way committing to such an action necessarily reduces options going forward, including the one to avoid conflict altogether. A possible consequence of such thinking can be false rationalizations to support the decision after the fact — that is, after crossing the “Rubicon” (or some other “point of no return”) to avoid considering alternatives thereafter that might still exist but have been ruled out by the earlier-declared commitment.

In poker, players sometimes mistakenly describe themselves as having been “pot committed” as a justification for going all the way with a hand when they didn’t actually have to do so. Betting chips early in a hand sometimes makes it more difficult for some players to fold later on and concede losing those chips they’ve bet. Thus any bet or raise or call they make becomes justification for committing to battle for a pot to the very end... even if their opponent has assembled a much stronger “army” against them.

But just as in military strategy, it is generally not desirable in poker to seek situations in which you lessen your available options. Players in tournaments prefer amassing big stacks precisely because of the flexibility it gives them when playing hands, whereas those with short stacks find their options reduced. The same goes for cash games, in which those with bigger stacks can be more creative than those with less. One shouldn’t, then, actively look to become pot committed unless the situation is favorable for doing so — e.g., when holding a strong hand that rates to be better than an opponent’s, or when facing pot odds that make committing the rest of one’s stack correct.

To describe an extreme example, say you lose a big hand early in a full ring (nine-handed) no-limit hold’em tournament that knocks you back to just 1,000 chips at a time when the blinds are 400/800 with a 100 ante. Making matters worse, on the following hand you are in the big blind, meaning you only have 100 left after posting the ante and big blind. A player in middle position then raises and all fold around.

The action is on you. And you hold

Here is an obvious example of being pot committed. The blinds and antes total 2,100, and after your opponent raises you have but 100 left to call, making the effective stacks between the two of you just 100. That means you are facing calling 100 to win a pot of 2,200 — that’s pot odds of 22-to-1.

Even if your opponent holds

and has an 88.3% chance of beating you (according to the PokerNews Odds Calculator), that’s still just over a 7-to-1 advantage. In other words, mathematically speaking, you’re “priced in” to call no matter what two cards your opponent has. You are, as they say, pot committed.

Of course, you don’t have to call. The option to fold is still available to you, even if doing so would be foolhardy given how that would leave you even less likely to recover. But since you genuinely are pot committed, you should.

That’s a simple and relatively rare example, though. More often your decisions will be less cut-and-dry, although understanding how to calculate pot odds and thus determine whether or not committing your last chips is mathematically correct will help a great deal when making them.

It is a common mistake to consider committing a high percentage of chips in one’s stack already as causing one to be pot committed and thus without options when it comes to deciding what to do with the rest. Those two circumstances often coincide, but you shouldn’t believe yourself obligated to put the last of your stack in just because you have already bet a certain amount before.

Again to fashion a somewhat obvious example, let’s say I play a hand recklessly and keep calling an opponent’s bets all of the way down to the river as I crazily chase a straight draw. I start the hand with 1,000 chips holding

and call an opponent’s raise to 200. The flop comes

, my opponent bets 400, and I call again, leaving myself just 100 chips. Then the river brings the

and my opponent bets one more time, enough to put me all in.

I’ve played the hand miserably, spewing 900 chips from my starting stack of 1,000 chasing that straight. But calling the last 100 here would be even worse. I’m not pot committed because of the chips I’ve already bet. I might be pot committed if I thought my chance of winning the hand if I called were better than the approximately 20-to-1 pot odds I was facing — but with just five-high, I don’t.

Sometimes we do want to be pot committed, say in a tournament in which we are down to a short stack and finally get dealt a premium hand like

. Then we want to get all of our chips in the middle, and thus might bet in a way that increases the likelihood we’ll be getting the remainder of our stack in sooner than later.

But generally speaking, unless you know you are getting favorable pot odds given the hand you hold and it’s chances of being best, being pot committed isn’t desirable. You want to have the option to fold available to you, especially in a tournament when doing so enables you to continue.