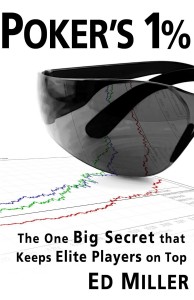 Poker's 1%: The One Big Secret That Keeps Elite Players On Top

Elite poker players aren't like the rest of us. Sure, they play in huge games where tens of thousands of dollars can move in the blink of an eye. But that's not the only difference.

Elite players play and think about the game in a completely different way from everyone else. If you want to raise your game to their level, it's not just a matter of getting a little better at what you already do. The honest truth is that the way 99% of poker players approach the game is fundamentally flawed. You will never be able to crack the top 1% until you know what they know.

There's one big secret to the game that nearly every elite player knows, yet almost no one else understands. It's an open secret-no one is hiding it. Elite players talk about it sometimes in videos and articles. Nevertheless, top players have known this secret for years, yet still almost no one else does.

Poker's 1% seeks to change that. It bridges that gap between the elite players and everyone else. It promises that as long as you are willing to put in the work, you too have a shot to reach the top.

Poker's 1% teaches a way of thinking about how you play, a way to unify every hand you've ever played and ever will play into one single, overarching strategy. The goal is that you will have one big "aha" moment, the moment where you finally "get" this game.

After that, it's just fine tuning. The more you fine tune your strategy, the more you win, and the higher you can go.

Poker's 1% gives you a unique window into the secrets of the world's best players. It shows you what you've been doing wrong and how to fix it. And, most importantly, it guides you in a straightforward way along the path from average player to elite.

Check out a review of the book on Learn.PokerNews.com