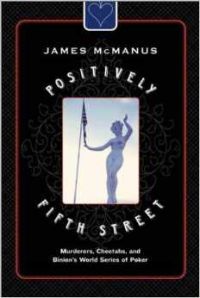 In the spring of 2000, Harper's Magazine sent James McManus to Las Vegas to cover the World Series of Poker, in particular the progress of women in the $23 million event, and the murder of Ted Binion, the tournament's prodigal host, purportedly done in by a stripper and her boyfriend. But when McManus arrives, the lure of the tables compels him to risk his entire Harper's advance in a long-shot attempt to play in the tournament himself. This is his deliciously suspenseful account of the tournament--the players, the hand-to-hand combat, his own unlikely progress in it--and the delightfully seedy carnival atmosphere that surrounds it. Positively Fifth Street is a high-stakes adventure and a terrifying but often hilarious account of one man's effort to understand what Edward O. Wilson has called "Pleistocene exigencies"--the eros and logistics of our competitive instincts.