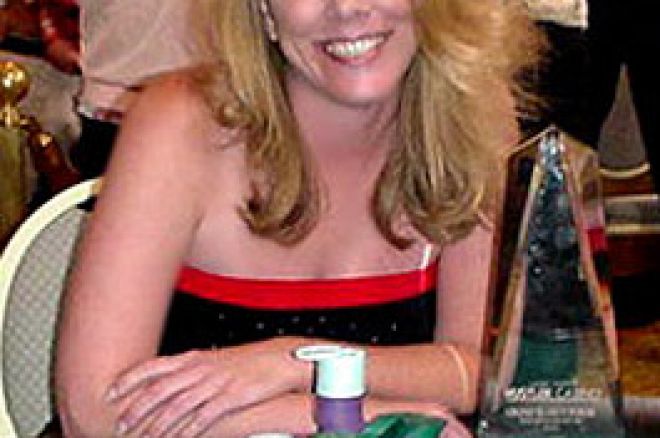 Many may have wondered, during their viewings of "Live At The Bike" on Wednesdays through Saturdays on the Internet, just who the attractive blonde is that is one of the hosts of the program. Many may also have wondered just what are her credentials for being the host of the program. She is Shirley Rosario and, through her own hard work and achievements in poker, she is showing that she is more than just a pretty face!

Shirley is one of the many excellent poker players that have been on the scene in Los Angeles for some time. She has compiled an excellent tournament record in the casinos of California, including a final table finish on the LIPS Tour during the World Series of Poker Circuit stop in San Diego back in February and a championship in the $500 Omaha Hi/Lo tournament held during the Legends of Poker this year. Shirley has also competed in many World Poker Tour and World Series of Poker events as well.

When she isn't tearing up the L. A. poker scene, she can be found playing the online version of the game or working as a proposition player at the Bicycle Casino in Los Angeles.

As you can see, Shirley has more than enough poker credibility! Recently we were able to correspond and she provided some very insightful looks into tournaments and her work in the game of poker.

PN: First, Shirley, congratulations on your Omaha victory during the Legends of Poker! What are some of the difficulties faced when competing in tournament poker, especially when you are the leader?

SR: Thanks, Earl! I can't answer for everyone, but the thing I find most difficult about tournament poker is the amount of concentration it takes for an extended amount of time. I am constantly battling to keep my head in the game. My iPod has helped a lot because I don't get involved in most of the chatter at the table when I have my earplugs in.

Being one of the chip leaders is another difficulty of mine because I tend to get "chip happy." I can play a short stack with the best of them, but knowing what to do when I have a lot of them is something I am working on at the moment.

PN: Omaha and No-Limit are your best games. What are the things that newcomers make mistakes in between the two games?

SR: I could go on and on about the mistakes I see players make in Omaha Hi/Low. The most common mistake is players drawing for half the pot. The game is all about scooping pots. In No Limit Hold 'Em, I see a lot of newcomers play weak aces. One of the problems with the hand is you can't take any heat with it.

PN: What poker game can you not get a grasp of?

SR: I understand all of games, but Stud is probably the most difficult for me. The game takes more concentration because you have to remember all of the up cards and how those cards affect your hand. Considering "lack of focus" is my biggest obstacle in poker, Stud is very difficult for me.

PN: What are the risks and rewards of being a proposition player there at the Bike?

SR: I have learned so much since I got the prop job. As a prop player, I am forced to play in all games at a variety of limits and make adjustments accordingly. Omaha has always been my strongest game and at one time it would have been my game of choice when playing in a casino.

Since I got the prop job, I have been forced to play numerous hours of Limit Hold 'Em, No Limit Hold 'Em, and Crazy Pineapple and my game has grown tremendously in all of these games. Now when I enter a casino, I have a wider selection of games to choose from. On the downside, props don't get to pick and choose the best game while on the clock. We are forced to play in short games sometimes and at other times we are forced to get up from a juicy game.

PN: How does money management affect your job?

SR: I have so many jobs, which one are you talking about? (Laughs) Money management plays a different role in each job I have. I try and save a large portion of my income from operating my own website (poker-babes.com) and from doing the commentating on Live at the Bike, but managing my money on a daily basis isn't as important as it is in my poker playing jobs.

Money management is one of the biggest factors in being a successful poker player. In order to make money at the table, you have to have money. I make sure to pick the best games possible and don't play in a game where one loss can jeopardize my bankroll. As a prop, I sometimes get forced into a game I might not choose otherwise, but I never get forced into a game with limits that are too high.

PN: What was the thought processes behind the startup of "Live at the Bike"?

SR: Many of the poker television programs are edited and only show the final table of tournament play. The producers thought it would be a good idea to let viewers see what happens during a live ring game. This means they get to see every hand that is played during the three hour broadcast and they also get to listen to what the commentators have to say.

PN: "Live At The Bike" has been well-received by poker fans. What are some of the things that you try to get into each show?

SR: Each show is different because a different game is scheduled nightly. We never know what is going to happen or who is going to show up.

PN: What is coming in the future for "Live At The Bike"?

SR: "Live At The Bike" has been picked up by the Poker Channel (on SkyTV in England and Europe). They take our show and cut it down to an hour and a half program. The name of the edited version airing on the Poker Channel is "The L.A. Poker Scene."

PN: How can online poker assist someone with their overall game?

SR: Online poker is a great tool for learning poker. A player might be intimidated to sit down in a B&amp;M casino if they are playing for their first time and online poker is a good place to start for people like that. The main reason I like online poker is because you get so see many more hands. Players can increase their skill level faster when playing online poker.

PN: What online sites are your personal favorites?

PN: (Laughs) What are your views on "women only" tournaments?

SR: I have played several "women only" tournaments, but they aren't the same as playing in open events. I participate in them occasionally because I get to see some women that I might not run into otherwise. The ladies tournaments are great for women who haven't played in an open tournament because it helps them to get their feet wet, but they aren't my first choice when selecting the tournaments I am going to play.

PN: Can we expect to see you take more shots at tournament poker?

SR: Tournaments are a passion of mine. I love playing all forms of poker, but there is nothing like the competition of tournament poker. I play in as many tournaments as I have time for and hopefully in the near future, I will have more time.

PN: How has poker changed from when you first entered the game?

SR: The biggest change is the huge growth in poker. There are so many people playing now that it is easy to find all types of games at a variety of limits at all times of the day.

PN: What are some things you see in poker that really anger you?

SR: I have an article on my website about some of my pet peeves. There are numerous things that bother me at the poker table, but the biggest one is when a player asks to see another player's cards. Most new players do not understand why the ability to see any called hand rule was originally implemented. They do not know the rule was made to prevent collusion and cheating, not to get a line on someone else's play. It makes me even crazier when the winner of the hand asks to see the losing hand.

Another thing that bothers me is when one player criticizes another for the way they play. It usually accomplishes two things...the player leaves the game or the player listens to the criticism and becomes a better player because of it. One other thing that gets under my skin is when a player makes a scene when he wins a hand in a tournament. It makes good television, but it is bad sportsmanship.

PN: How would you make the game even better than it is today?

SR: I would like to see all players handle themselves in a professional manner while playing at the poker table. Losing graciously is a trait that many people lack.

PN: It seems you are always doing something poker-related. How do you get away from it all?

SR: I usually spend the weekend days hanging with my family. Those two days do me a world of good. I love the game, but I try and keep it in perspective. Family is much more important than winning the next hand.

PN: Do you see yourself having a life long involvement with the game?

I want to thank Shirley for sitting down in her busy schedule for our discussion. She is one of the women who, while many may not know it, is truly immersed in the game of poker and is working to improve the sport in many ways. Be sure to take a look at the Los Angeles poker scene (and Shirley) during "Live At The Bike" from 6-10PM (Pacific Time) Wednesdays through Saturdays at thebike.com.