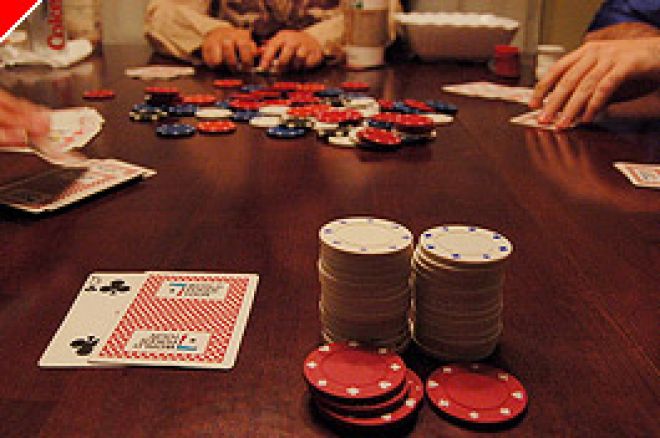 Editors Note: Here at PokerNews.com, we think it's all been getting a bit on the serious side in the poker world lately. With that in mind, we are going to lighten things up once a week or so by introducing (or re-introducing) you, our valued readers, to some of the less serious poker games we all played (and maybe still do) growing up. Enjoy the first edition – Follow the Queen

There was a poker book that came out a year or so ago. It encouraged all home poker game players used to playing Dealer's Choice games to switch over to "serious" casino-style poker games like hold 'em and stud. The author opined that anything but those games wasn't really worthy of our time.

Unfortunately, this opinion seems to have permeated the poker world. If it ain't hold 'em stud or Omaha, think many today, then it ain't really poker.

I respectfully disagree. For me, poker is a fun game with infinite variations that can be learned, stretched, changed, and altered to cater to the whim, capricious and legitimate interest of those who play it. To those who think 7-card stud and Texas hold 'em are the sine quo non of standard poker games, let me remind you that up until the 1970s these games were considered wild variations of the casino standards of 5-card draw and 5-card stud. What appears conventional today was at one time no more than a wild variation of another game.

Poker is ever evolving. In the interest of that evolution (and some might argue devolution) I'd like to list some of the dealer's choice games that I've grown to enjoy – or at least appreciate. This column is dedicated to the fun side of poker: serious strategy considerations held in abeyance for now. Let the fun begin!

I first played this game in high school. We played it with a nickel ante and a maximum $.25 bet. My buddies and I loved it. But today, most of my poker playing buddies avoid it because it has wild cards. In my opinion it was and is a great game. Here's how it goes.

Deal Follow the Queen as you would deal 7-Card Stud. Begin with an ante. You can either have each player ante or have the dealer ante for the table. Anteing for the table saves time, ends up costing everyone the same amount at the end of the night as the deal rotates, and eliminates the confusion about who has missed their ante. But it may annoy some purists who like the idea of having everyone start out each game with some stake in the pot. You decide what to do. But start with an ante.

The dealer then deals each player two down cards and an up card. You can play that the lowest card must start the betting – as they do in a casino – or give the player with the highest exposed card the option of betting or checking. I like the forced bet because it increases action by starting off with a wager. Either way – it's your home game.

Follow the Queen differs from 7-Card Stud when a Queen is dealt as an up card. This is because the card dealt after the face-up Queen is considered a wild card. So too are all other cards of the same rank. So, for example, if the dealer deals out the following hand, all 5s are wild.

Clockwise around the table

As you can see, the card to fall after the Queen is the 5s. This makes all fives wild. So your 5d is also wild giving you three to a straight flush, three to an Ace-high flush, a pair of 8s or a pair of 7s.

There is a betting round following this deal and then another card is dealt face up. The same rules apply. Whenever another Queen is dealt, a new wild card becomes wild and the old wild card ceases to be a wild card. So, for example, if the deal continues as diagramed below, fives would no longer be wild. Instead, sevens would be wild.

As you can see, a Queen was dealt face up to Player D. The card that followed it, your card as it turned out, was a 7. That meant that all sevens became wild – including your new upcard and your 7 in the hole. You lucky guy. You got two wild cards!

At the same time, fives stopped being wild cards. You didn't know if this helped other players – because you couldn't see their down cards. But you're certain that it helped you. Instead of having just one wild card you had two – giving you four to an open-ended straight flush, three 5s or three 8s. You already had trips and were well on your way to getting a full house, four of a kind, a flush, a straight or even a straight flush.

The game usually produces a lot of action. Players are excited by the appearance and then disappearance of wild cards in their hand. Hope springs eternal as players wait for a Queen and subsequent wild card to drastically change the value of their hand.

One additional rules must be understood and agreed upon before. In the game I play, if a Queen is dealt on sixth street (the last round with upcards) to the last player as his upcard – so no upcards can follow it — then, and only then, the Queens themselves are wild – and there are no other wild cards.

Let me show you a fully diagramed deal from the above example to give you a full taste of how this game might develop. Let's assume this is a $.50/1.00 game with a $1.00 dealer ante and that everyone is in the hand until fifth street which plays out as follows:

Sevens are wild, as we've seen, because one followed the last Queen that was dealt. So you have two wild cards, one of which is showing. But even so, you don't have the high hand showing. Betting begins with the pair of Aces held by Player C. He bets $1.00. Player D folds. It is your action. You have four eights.. You could raise. There's good reason to do so. You might knock out a couple of players – which is a good thing when you have a wild card in this game since it means there's less of a chance that someone else will get a Queen on later rounds, preserving your wild card. You'd also build the pot. But you decide to slowplay it to keep other players in the game. So you only call.

Player F, on the other hand, with an exposed pair of Kings raises. You figure he must have at least three Kings or maybe that last card gave him four to a big straight flush. In any event, he's called by Player G who has three cards to a straight flush. Player A and Player B fold. Player C, with the exposed Aces calls. You call as well. Four of you see sixth street which is as follows:

Your first thought is happiness that no Queen fell so your two 7s will stay wild for the entire game. You then notice that you have a full house – 8s filled with 7s. But wait! Your 7s are wild so you have the incredible hand of five 8s!!!!! Five of a kind, for those of you who don't play wild card games, is the strongest hand you can have. It even beats a straight flush. So unless someone gets a higher five-of-a-kind you have the best hand.

You also notice that Player F spiked a wild card too – giving him at least three Kings. He also may have a straight flush. Still, you figure to be in the lead.

The betting on sixth street is as follows:

Player F was high with three Kings and bet $1.00. Player G called. Player C called initially, though drops out later when the raising starts. You, with your five 8s raise. Player F, whom you now put on four Kings, re-raises. Player G calls. Player C drops out. You take the last raise (the three raise rule is in effect). And Players F and G stay in for the final buck. Three of you see the River.

On the River you got the Qc. You can't improve on your five 8s so you don't care. And the Q has no special value anyway as a final down card. So your hand value wouldn't have changed in any event. The betting proceeds as follows.

Player F, believing no doubt that he has the best hand, starts the betting. You and he have a raising war with player G calling along until the betting is finally capped. You expose your hands at the showdown. You all reveal the following

You win! The other players have strong hands too – hands that would probably nearly always win in a typical game of 7-card stud. Player F had the other two 7s – a highly unusual occurrence. But that gave him the big straight flush. Player G really should have folded. With your trips showing and your aggressive raising he should have assumed that you had at least a full house. But crazy things like this happen in this game. So you're happy to take the money. And happy to play this great game again! What's not to like?