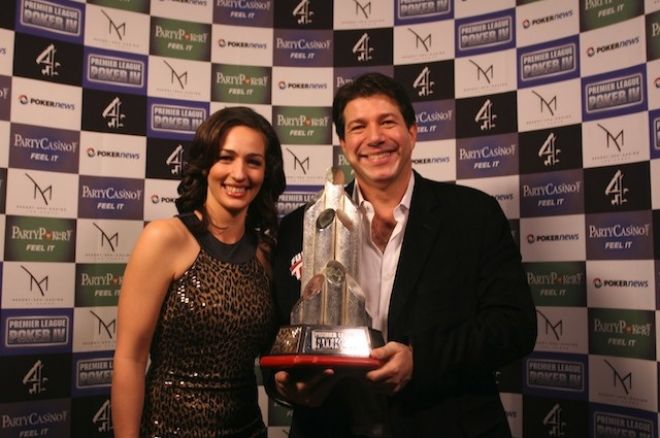 After almost two weeks of play at the M Resort & Casino, the PartyPoker Premier League IV reached it's conclusion on Thursday night with David Benyamine beating Luke "FullFlush" Schwartz for the title and $400,000.

The finale is sure to make some great poker television, as Schwartz entered the heads-up play with a massive chip lead, which over the course of three consecutive hands would be erased. In the first big pot the two played, Luke Schwartz open-shoved with

and was called by Benyamine holding

, and Benyamine was able to get his first double up.

In the next hand, both players limped preflop to a

flop and checked to the

, turned a straight leaving Schwartz in bad shape with his top pair and draw to the sucker end of the straight. Benyamine was keen to trap Schwartz and when the

hit, giving Schwartz a straight, too, that's just what he did. Schwartz bet 80,000 and Benyamine raised, making it 150,000 more for Schwartz to call. Schwartz thought about it for a bit saying, "how did you make the flush" and then finally made the call. Schwartz tossed his cards on the table, visibly irritated, when he saw Benyamine's higher straight.

Without a hand to take a breather, the two were at it again on what would be the last hand of the night. Luke Schwartz raised it up to 80,000 with

and would get called by David Benyamine who held a dominating

. The flop came down

, and Benyamine checked, allowing Schwartz to bet 70,000. Benyamine then raised it up to 210,000, and after a few seconds Schwartz moved all-in for 480,000 more. Finally, Benyamine slid the chips into the center and Schwartz proudly announced he had a queen, only to see that it was no good. "Why'd you slow roll," Schwartz asked Benyamine. "That's an easy call." The turn card was the

, eliminating any chance at a chop, and the

eliminated Schwartz from the tournament.

While the end of the match was extremely fast-paced it took several hours to lose any of the players at the final table. Nobody wanted to be the first person out, and in ironic fashion it was the man who entered the final table as the chip leader, Phil Laak, who would ultimately receive the "first out" honors. Laak's final stand came with pocket tens, which were racing against Benyamine's ace-king. Laak's luck from earlier in the week would not hold; Beynamine hit an ace on the turn to eliminate Laak from the tournament.

Roland De Wolfe was the fifth-place finisher, and Daniel Negreanu finished fourth. Negreanu in a blind- versus-blind battle decided to pull the trigger with pocket sevens and move all-in after Schwartz raised him with pocket kings. Schwartz snap-called, and the board brought Negreanu no help.

One of the biggest surprises of the Premier League IV was the PartyPoker online qualifier from Italy, Giovanni Safina. He fought against the best in the world all week and more than held his own. His luck finally ran out, however, when Luke Schwartz's

when a lucky three hit on the river for Schwartz.

PokerNews's own Kristy Arnett caught up with both the champion and the runner-up after the match was complete.