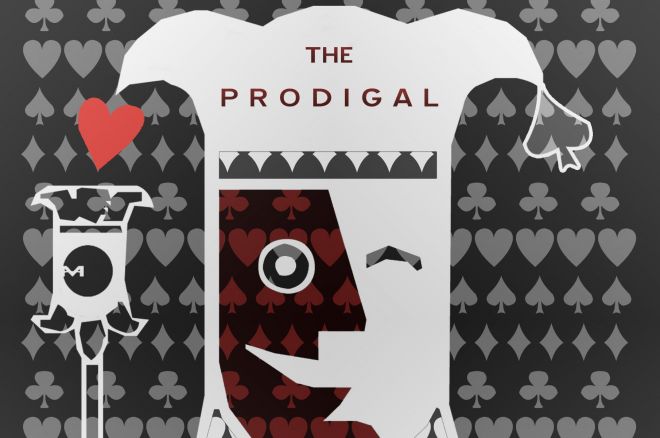 I’ve reviewed a number of books for PokerNews over the past two years, but I’ve never evaluated a piece of poker fiction. The reason for this omission is twofold. First, I prefer nonfiction. Second, there isn’t a lot of poker fiction on the market. With that said, I thought it was about time to set aside my reservations and give it a try, starting with The Prodigal by Alex Allison.

Here’s Amazon’s modest description of the book: “Martin is twenty-one, an age not worth lying about. He’s been happily doing nothing, claiming to be a professional online poker player. But now, he’s facing a life away from the corrupting influence of overwhelming privilege.”

For me, The Prodigal turned out to be a book not so much about poker but about an existential experience with poker as the backdrop. Interestingly, I think an existential relationship is one that many young players have with the game today—they don’t know their value and place in the world outside of poker. Take David “Raptor” Benefield, Mike “Timex” McDonald and Shaun Deeb, for example. At one time or another, all of these young online players announced their “retirement” from poker, but each subsequently returned to the game in some capacity.

In The Prodigal, Martin is representative of your typical 21-year-old online player, at least in my opinion after covering hundreds of them in tournaments throughout the years. He’s sporadic, cocky, and generally lives in his own little world. The character is often off-putting as seen in the second paragraph of the book when Martin’s daily routine is highlighted:

At the same time, Martin endears himself to the reader and becomes a character you can’t help but sympathize with, especially when it comes to poker. It certainly helps that Allison himself is an experienced player who doesn’t dumb things down. He knows his intended audience, poker players, so he denies the compulsion to explain everything. For him, there is no need to define simple terms or explain how the game works as he assumes, rightfully (who doesn’t know how to play poker these days?), that his audience is educated.

The fact that the 21-year-old Allison was a part of the poker world before he wrote The Prodigal gives him undeniable insight and authority in the game. He manages to incorporate thoughts everyone has in a way that helps propel the story. Check out the following two excerpts, which are among my favorite in the book, to see what I mean:

Another thing that I found off-putting, at least at first, was Allison’s unique use of fonts. He uses varying font sizes as a storytelling tool, which I hadn’t encountered before in a novel. For example, whenever one of the characters would yell, the text would get bigger. Likewise, when a character whispered, the font got smaller. At first this technique was kind of a nuisance, but once I grew accustomed to it I found it to be quite effective and enjoyable. Speaking of Allison, I became a fan of his style on the whole. He is a young up-and-coming author who has obviously devoted himself to his craft. I look forward to reading his work in the future even if it doesn’t involve poker.

I have a feeling a lot of people will read The Prodigal and stop when they inevitably ask themselves “What the hell is this?” I had this moment, but I persevered and I’m glad I did because I enjoyed the book a lot. Considering its existential nature, there will be plenty of people who don’t care for it, but those who love poker and contemplate the overarching questions of life just might enjoy The Prodigal.

After I read The Prodigal, I had the opportunity to sit down and ask Allison some questions. Here’s our exchange.

PokerNews: For those who may not know you, can you tell us a little about yourself?

Alex Allison: I am 21, from London. Currently living in Manchester, where I am doing a masters degree in creative writing, studying under writers like Jeanette Winterson, MJ Hyland and Geoff Ryman. Last year, I graduated from the University of York with a degree in Art History. Prior to that I was state school educated. I'm the first in my family to attend university.

How did you come to write The Prodigal? What inspired the idea and how long did it take?

The Prodigal was my first attempt at fiction writing. I'd be playing around with poetry for a long time, with a reasonable degree of success. In 2011, I realized that I had a story that needed to be told. As a poker player and a member of the poker community, I felt really aware that there was no fiction being produced about poker. This wasn't without reason. All the pros are too busy playing, and the poker community insists on bitch-slapping Hollywood attempts to display poker, quite rightly in most cases. Our community is a hostile environment for creative people. Since then, I'm really pleased to have seen a few really good poker documentaries emerge, but there's still no real fiction. I wrote The Prodigal with the intention of exploring one specific facet of the poker world: delusion — those who are confronted by poker-genius every-which-way they turn, and convince themselves that they are capable of reaching the same heights.

Is the main character of Martin based on yourself?

Martin is a rich, degenerate kid. These are qualities I'm not quite 'lucky' enough to have. Martin is a dickhead, but a dickhead without any streak of cruelty or malice. He's essentially helpless. He is inspired by the poker players that I have been making money off for the last four years.

A lot of the experiences written in the book seem personal, as if you may have experienced them firsthand. Is this the case? If so, can you provide an example and why you included it in the book?

The book is pure fiction. The main aspects of the plot came from my imagination. I'm pleased that you found them convincing and believable! However, the scenes in casinos are certainly inspired by my real experiences. For example, in the following scene, Martin shares my resentment for old people at the table:

“An elderly Asian man approaches the table from the cash desk. His tiny, tan hands struggle to manage two small stacks of loose, high denomination chips. Asking for a rack would be below him. With a look of vague consternation, the man settles down at the opposite end of the table. His face is streaked with fine creases. Martin hates playing against old people. They act slowly and tend to add nothing to the action. Now settled, the old man begins to count his chips. His face has tightened up, giving him an expression that appears to be a mixture of seriousness and drowsiness.

“Martin imagines that he should be feeling some sense of endearment towards the old man, to the elderly in general. Instead he is spiced with a desire to stroke the man’s face. It seems too easy to feel disgusted by old people. The man’s head looks like a depressed balloon.”

Can you describe your poker experience? For instance, when and how did you learn to play?

I first learned the rules to Hold’em on a school trip. We played with matchsticks. I made quads in the space of our first circuit. I didn't really play again until I reached university, where two of my housemates spent the evenings grinding online. I began to join in and went through a cycle of breaking even. We set up a society that exists to this day. Now, the society tournament attracts around fifty people a week. By our second year, we had our own house and were running cash games around three nights a week, usually at 5p/10p. It was good fun, and we all improved our games a lot. I started turning out big MTT results, which I still do to this day. My volume is small, but my ROI is around 25 percent over 1,500 tournaments, with an average cash of $125.

I think your observation is excellent. It would be hard to write an entertaining “poker book.” A poker player spends his/her time sitting at a screen for 8-15 hours a day. It's hard to dramatize that. I think of The Prodigal as a comedy. Hopefully people will find it funny. My litmus test for a line was "can I imagine a character in Peep Show [a British comedy] saying this?"

As the author, whom do you believe is The Prodigal's audience?

When I pitched the book to my publisher, I presented this as a book written very much as a love song to the poker community. I'd love to see it do well among people who would really "get" the kind of characters that the novel includes. I hated the idea of being really explicit with poker terms. I don't define any of the language I use in the novel. Here's one passage that might evidence that idea:

“The poker room is a space cut off from reality, where money dictates the flow of all relations. There is an air of mischief to the room. People speak out the corners of their mouths. Things seem on the cusp of legal behavior.

“This microcosm has its own language. It’s a living lexicon. The game’s language exists to keep some fools out and trap even bigger fools in. You’ll have heard of donkeys and fish, but what of the rockets? What of the fishhooks and gay waiters? What of the suck and resuck, the gutshots and wraps and double bellybusters? What space is there for a bad beat jackpot? What is there left to be said of tilt? Who is durrrr to you? What’s an isildur1? How would you respond to OMGClayAiken? What is life before you’ve sharkscoped Spirit Rock, nanonoko, moorman1? This language is the soul of poker. Cards are but a blunt instrument. Cards are the messy, unpredictable side note to the sport. It is cards, however, which force the drama of life.”

Do you have a tattoo? If so, what is it and is there an equally entertaining story on how you got it compared to David & Martin's experience in the book?

I do have three tattoos, but the stories behind them are nowhere near as funny or entertaining. However, this section is based upon real experience:

“’Whoa there son, slow down. Hell, I wish the girls were as fast to get their clothes off. I have to do your design first.’

“’Oh right,’ David says. Martin can tell that he seems unsure whether or not to button his shirt back up.”

Do you have any other books in the pipeline? What's next for you?

I wrote The Prodigal in 2011, and spent the next year and a half getting my first-class degree. I only started on my next book quite recently. Being on an MA here in Manchester has been really beneficial to my productivity. The new project doesn't involve poker, but I do have another idea for a poker novel that will emerge somewhere in the future. If I had funding, it would happen a lot sooner.

Finally, where can people get their copy of The Prodigal?

The Prodigal is available on Amazon UK, Amazon U.S. and on my blog.