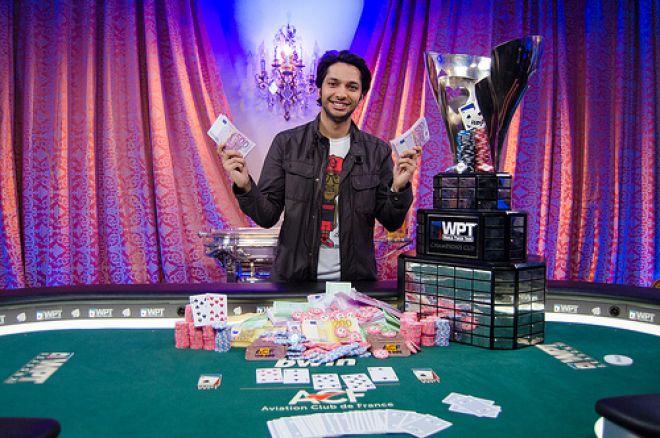 After five days of poker that included two starting flights, a winner of the Season XII bwin WPT Grand Prix de Paris has been crowned. In the end, it was Mohsin Charania who was able to overcome a large chip disadvantage to clinch the title and the $469,477 in first-place prize money.

The final table began with Vasili Firsau holding a commanding chip lead over the field. Firsau continued to extend his lead by eliminating the first player at the final table, Kimmo Kurko. Kurko, who began the table as the short stack, managed to double up twice early on and yet still found himself as the first casualty. Kurko’s tournament life came to an end when he was all in with

. Kurko found no help on the community cards and was eliminated in sixth place for $90,845.

Christina Lindley was out to make history with an attempt to become the first ever woman to win a WPT championship in an open event. Unfortunately for the member of WPT Ones to Watch, she exited from the tournament in fifth place. During her final hand, Elliot Smith opened with a raise and Lindley moved all in over the top from the cutoff. Action folded to Firsau who announced an all in bet over the top from the big blind and Smith let go of his cards. Lindley showed

but found that Firsau woke up with a dominating

. The pocket rockets held up and Lindley was eliminated.

Smith was the next to fall, and the elimination once again came at the hands of Firsau. Smith three-bet all in before the flop and Firsau called.

. The board completed with the

, ensuring that Smith would find a walk to the rail in fourth place.

) hit the felt. Fourth street was the

, meaning Apostolu was looking good to secure a double. Unfortunately for Apostolou, the

drilled the river, giving Firsau fives full of kings to continue his streak of domination. Apostolou collected $204,432 for finishing in third place.

It was truly a David and Goliath story as Charania took on the mighty Firsau in heads-up play. Firsau began the match with a 7-to-1 chip advantage, which meant that Charania truly had his work cut out for him. Despite Charania doubling twice during the early goings of the heads-up match, Firsau was able to pound him back down to his last 600,000. According to the WPT Live Updates, Charania then found himself all in holding just

The dealer produced a flop that read

, giving Firsau top pair and what looked to be the championship. Charania picked up a few outs to make a wheel for miracle double when the

fell on fourth street. And then, amazingly, the

rolled off on the river, and Charania was right back in the game.

From there, Charania went on a tear and won pot after pot until he took the chip lead for the first time at the final table. Eventually, the match came to a head when Charania opened to 165,000 at 40,000/80,000/10,000. Firsau three-bet all in and Charania snapped him off.

The two were flipping for the title, and after a run out of

Charania was crowned the victor while Firsau was eliminated in second place for $317,867.

With the win, Charania now owns two legs of poker's Triple Crown after winning the PokerStars.com and Monte-Carlo® Casino European Poker Tour Grand Final in 2012. He fell just shy of a World Series of Poker bracelet this summer in Las Vegas, but Charania is nonetheless proving himself as one of the top tournament players in the world.

*Photo and data courtesy of WPT.com.