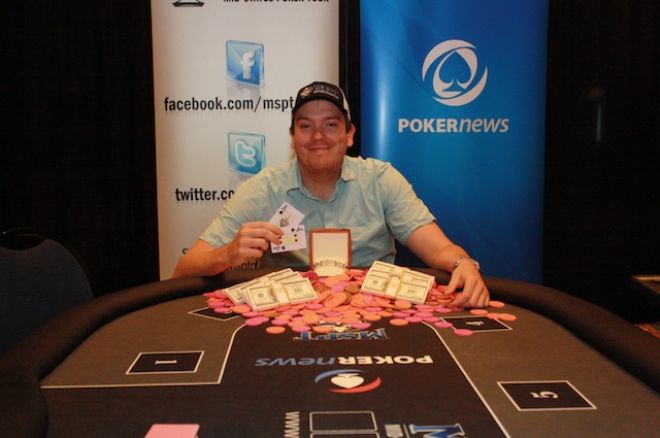 The PokerNews Mid-States Poker Tour Meskwaki Casino in Tama, Iowa attracted a field of 296 entries, and after three long days of play, Jesse Spooner, a Process Engineer from Easton, Missouri, emerged victorious to capture the $81,060 and the RF Moeller Diamond Championship bracelet.

Spooner direct-bought into the $1,100 Main Event, and his path to victory was a rocky one. He survived Day 1 with a below-average stack of 43,800 – placing him 65 of 90 advancing players. He also arrived at the final table as the short stack with just nine big blinds. Fortunately, he doubled through Jason Sell early, and before long found himself with the chip lead.

While a Missourian took down the title, the Main Event was saturated with players from Minnesota; in fact, 12 of the 27 players who cashed and six of the 10 at the final table were from the Land of 10,000 Lakes. Here are some final table highlights:

Spooner maneuvered through the final table like a seasoned pro, and by the time he reached heads-up play he held a 9-to-1 chip lead over Tom Tracy, a Supply Chain Manager out of Apple Valley, Minn. Even so, Tracy was not interested in going quietly. In the first hand between the two, Tracy was all in with the

. It was a flip, and one that Tracy would win after the board ran out

Tracy played fantastic to fight all the way back, even becoming the chip leader at one point, but Spooner was able to overcome the onslaught to regain the chip lead. On the 140th hand of the final table, the chips went all-in pre-flop and Tracy excitedly flipped up the

of Spooner crushed. Unfortunately for Tracy, the

flop paired Spooner’s four and made him a big favorite. Neither the

river helped Tracy and he had to settle for runner-up and $43,420, which was his second career MSPT cash.

Beginning Saturday, Nov. 2, the PokerNews Mid-States Poker Tour Ho-Chunk Gaming Wisconsin Dells in Baraboo, Wisconsin kicks off a week of festivities that culminates with a $1,100 Main Event on Nov. 8-10. Located just minutes from Wisconsin Dells — one of the top tourist and waterpark towns in the nation — Ho-Chunk proved to be a tremendous success in its inaugural year on the MSPT schedule.